"Royal Splendor in the Enlightenment: Charles IV of Spain, Patron and Collector" @ The Meadows Museum

"Royal Splendor in the Enlightenment: Charles IV of Spain, Patron and Collector" @ The Meadows Museum DALLAS, TX.- The Meadows Museum at Southern Methodist University will present "Royal Splendor in the Enlightenment: Charles IV of Spain, Patron and Collector", the first major exhibition to showcase the exceptional art collection and refined taste of King Charles IV of Spain (1748-1819), from March 7 through July 18, 2010.

The Meadows Museum will be the only venue outside of Spain for the exhibition, the result of a unique collaboration between the museum and Patrimonio Nacional, the Spanish government institution that manages the artistic holdings created through the patronage and sponsorship of the Spanish monarchs. The exhibition is curated by Patrimonio Nacional curators Dr. Javier Jordán de Urríes y de la Colina and Dr. José Luis Sancho.

Charles IV and his wife, Queen María Luisa, reigned from 1788 to 1808 (when they were forced into exile by Napoleon), at the end of the Enlightenment period. They had a special passion for the arts and collected avidly throughout their lives.

“During his reign, Charles IV created a highly sophisticated, refined and cosmopolitan court for which the arts played a major role,” said Dr. Mark Roglán, museum director. “The combination of collecting works from the past as well as investing in those of the present, especially in the field of decorative arts, became part of the daily life of this king, whose artistic taste was among the finest in his time and in the history of the Spanish monarchy. The exhibition also shows the development of Charles’ artistic interests; he was not only influenced by the Spanish tradition, but had a special fondness for Italian art because of his childhood origins in Naples, and for French art, due to the dense network of dynastic relations that linked the Bourbons of Versailles to those of Madrid in the 18th century.”

The exhibition includes more than 80 examples of furniture, textiles, clocks, porcelains, paintings and sculptures selected from the casas de campo (country estates) and royal palaces of Madrid, Aranjuez, El Escorial and El Pardo. The majority of works are from Patrimonio Nacional (the Spanish National Heritage), and most of them have never before traveled to the U.S. The collection includes some of the finest examples of art styles of the day, from Rococo paintings to a stunning Neoclassical dessert centerpiece of semi-precious stones, lapis lazuli, gilded bronze and enamel. Other highlights include the queen’s ceremonial throne with its 18-foot-tall canopy, an elaborate sedan chair in which she was carried by footmen, a gilded bronze, porcelain and enamel bird cage clock, and a shotgun of wood, steel, gold and silver belonging to the king, an avid hunter. Also included are works by Francisco de Goya, the first court painter under Charles IV; his 1789 portrait of the king is making its only appearance outside of Madrid in 200 years. A painting by Diego Velázquez, Portrait (miniature) of the Count-Duke of Olivares, c. 1638, collected by Charles, will also be featured, as well as paintings by Luis Meléndez, Juan de Flandes, Anton Mengs and Giovanni Panini, among others.

The exhibition, which will be shown in the Jake and Nancy Hamon Galleries, will be accompanied by a scholarly, fully illustrated catalogue in English produced by the Meadows Museum. Also included will be a documentary that will feature, in HD video, the rooms and gardens of the palaces highlighted in the exhibition, bringing to life the splendid residences of the King.

Charles IV, “King of Spain and Emperor of the Indies,” as he was officially known, was born in Portici (Naples) in 1748. He married his first cousin María Luisa de Borbón-Parma, a granddaughter of the French King Louis XV, in 1765, and became ruler on December 14, 1788, upon the death of his father, Charles III. In 1808 the king and queen were forced into exile by Napoleon. They eventually settled in Rome, where they died, just a few days apart, in 1819.

Thanks to the great administrative and economic reforms of his father, Spain was still one of the great world powers and enjoyed considerable prestige internationally when Charles IV ascended to the throne. As a result of its support for the cause of American independence, Spain had broadened its control over the greater part of the American continent, including extensive North American territories, in the area then known as the Viceroyalty of New Spain. (The complementary exhibition Contours of Empire: The World of Charles IV in the first floor galleries, featuring maps and books from SMU’s DeGolyer Library, will explore and analyze the territories that comprised the Spanish Empire during this period.)

Spain was also at the forefront of the Enlightenment during the 18th century. Throughout Europe, the enlightened monarchies, through their Royal Academies of the Arts, used works of architecture, sculpture, and painting to express their ideals of government and to develop new, more rational ideas in accordance with the prevalent neoclassical aesthetic. The new tastes and ideals of the Enlightenment were developed in both public monuments and palaces, where they could be seen and appreciated on a day-to-day basis by both the general public and the Crown. As a result, the arts became an instrument of propaganda and prestige. In this respect, the Spanish Crown became one of the most important courts of its time, especially during the reign of Charles IV.

The Spanish court moved about from season to season among several royal sites, including palaces and country estates with gardens and pavilions where Charles would spend part of the day relaxing and eating in the company of his most intimate circle. Charles took great pleasure in supervising the furnishing and decoration of his residences, which came to epitomize 18th-century opulence and fine artistic taste.

Two of them - the royal residences at El Pardo and El Escorial in the area of Madrid, built when he was still a prince - are landmark constructions of Spanish Neoclassical architecture. Their lavish interior decorations are still intact. The richest of his casas de campo is the Casa del Labrador (Farmer’s Cottage) in Aranjuez, built and decorated by Charles IV from 1794 onward. It is famous for its magnificent platinum room, designed by French architect Charles Percier and produced in Paris with mahogany, gilded bronzes, platinum, and paintings, anticipating what was to become the Empire style.

Furnishings from each of these residences are included in the exhibition, illustrating the great interest in classical antiquity that was prevalent throughout Europe at the time. Charles had a special passion for French decorative objects, especially works in silk, bronze, and porcelain, as well as pieces of furniture, and employed a number of artisans who had left Paris during the French Revolution seeking work in Spain. These works not only set a cosmopolitan tone inside the Spanish palaces and casas de campo, but also exerted a strong influence on the work of Spanish artists, thereby helping to bring the art of the court of Madrid into line with that of the rest of Europe. From artists such as the French designer Jean-Démosthène Dugourc and the Spanish architect Isidro Velázquez to silk manufacturers in Lyon, bronze smiths in Paris and Madrid, and woodworkers from the “Royal Workshop,” all contributed to the elaboration of a coherent collection of works that may now be seen outside of Spain for the first time. 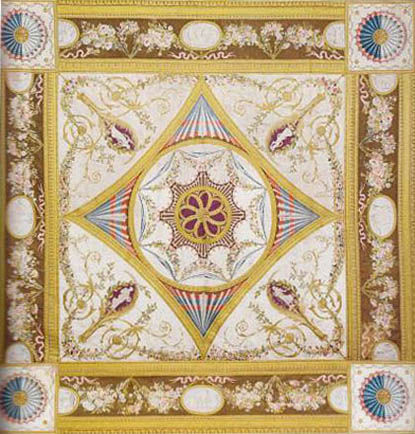 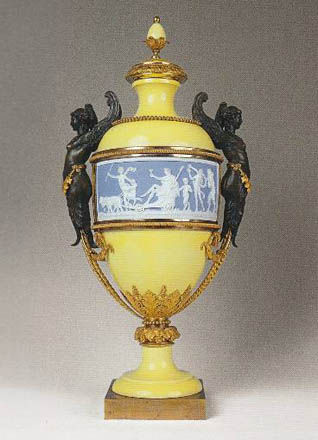