"Tulips in Amsterdam" @ The Rijksmuseum

"Tulips in Amsterdam" @ The Rijksmuseum 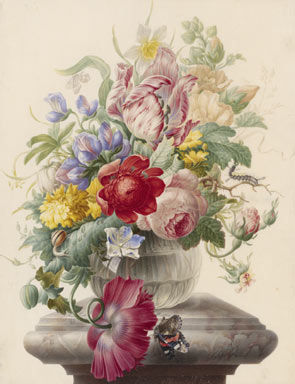 AMSTERDAM.- The Rijksmuseum is exhibiting its most beautiful prints and drawings of tulips from the 17th and 18th centuries. Individual tulips, tulips in bouquets, in the garden, as the design for a silver ornament, and featured in allegorical scenes. The highlight of the presentation will be the tulip book created by Jacob Marrel between 1637 and 1639. Complete tulip books are extremely rare, and the Marrel is seldom exhibited in public.

Jacob Marrel’s tulip book was probably a kind of catalogue used by customers for ordering their tulip bulbs. The book, still in its original binding, contains around 80 pages depicting scores of tulips, predominantly in red and purple. In the 17th century, ‘variegated tulips’ were the most popular. These ‘flaming’ tulips were not one single colour, but had white or yellow as the base colour, with red or purple as a second colour. They were given names such as Spinnekoop, Condé de Flandez, Bruit van Leide and La Bella Sultana.

Tulip bulbs were a valuable commodity throughout the 17th century, and the bulb speculation business sometimes reached incredible heights, only to fully collapse again afterwards. Agneta Block’s flower book from around 1690 shows just how much this rich Baptist widow was prepared to pay for a single tulip bulb. She purchased a large country house in the region along the river Vecht, where she was an enthusiastic gardener and had a book made containing pictures of all of the plants in her garden. The tulip called Root en geel van Leyden (‘Red and yellow from Leiden’) alone cost 100 guilders, but an Anvers bulb beat the lot at 510 guilders. By way of comparison: the annual salary of a 17th-century schoolteacher was around 200 guilders.

The 1614 book Hortus Floridus shows a garden containing a variety of tulip beds, in the form in which we still know them today. This garden must have been the stuff of dreams during the Golden Age, a time when even the richest merchants could not afford a tulip bed.

The presentation also contains various dazzling colour prints of tulips, cartoons about tulip-bulb speculation, and a Vanitas print comparing human life to the short-lived existence of a flower.

Starting from the opening of the Keukenhof on 18 March, the Rijksmuseum will be working together with the world's most popular springtime attraction. One ticket will provide admission to both the Rijksmuseum and the Keukenhof, with the option for additional transport, a visit to Haarlem and overnight accommodation.

The Rijksmuseum will be planting extra tulips in its garden to mark the presentation. The black Ayaan tulip will also be in bloom, named after public figure and politician Ayaan Hirsi Ali. 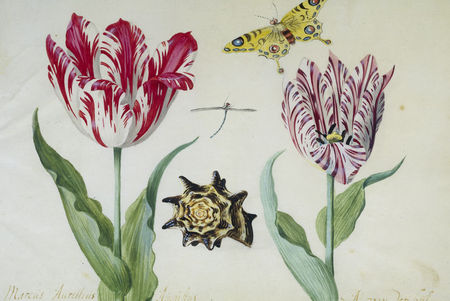 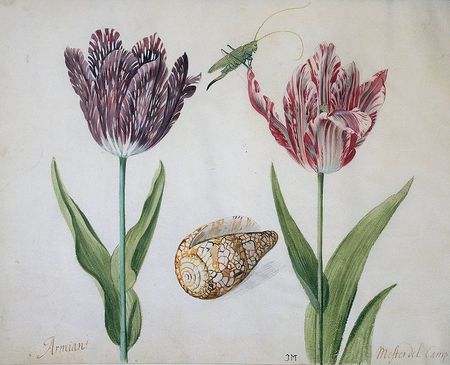