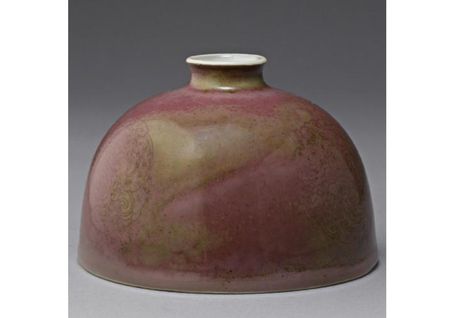 NOTES: Waterpots of this form, which are known as Taibo zun after the Tang dynasty poet Li Taibo, who is often depicted leaning against a large wine jar, or as qizhao zun because their shape resembles that of a chicken coop, can be found in many important museum collections, for example, in the Shanghai Museum, see Kangxi Porcelain Wares from the Shanghai Museum Collection, Hong Kong, 1998, pl. 206; in the National Gallery of Art, Washington D.C., included in Systematic Catalogue Decorative Arts, part II, Washington, 1998, pp.69-71.

These waterpots represent one of the eight peachbloom wares for the scholars' table. A complete set can be found in the Metropolitan Museum of Art, New York, as illustrated in Suzanne G. Valenstein, A Handbook of Chinese Ceramics, New York, 1989, nos.231-238 well potted with deep rounded sides supported on a short foot and rising to a flared rim, applied overall with a rich intense 'egg-yolk' yellow glaze turning to a darker tone around the footring, the base glazed white and inscribed with the six-character mark in underglaze-blue within a double-circle - diameter 12 1/4 in., 31.1 cm - Estimate 10,000 - 15,000 USD

NOTES: A similar Kangxi bowl is illustrated in Ayers, The Baur Collection, Geneva. Chinese Ceramics, vol. III, 1972, no. A446. Two bowls of slightly larger size are in the Percival David Foundation, London, included in the Foundation's Illustrated Catalogue of Ming and Ch'ing Monochrome, 1973, nos. A522 a and b; and another is in Taipei, published in Illustrated Catalogue of Ch'ing Dynasty Porcelain in the National Palace Museum (vol. I), 1980, pl. 63. the pear-shaped body carved with qilongs on a dense lingzhi and foliate scroll ground, below a keyfret diaper band and linked lingzhi collar around the neck, set on the shoulders with a pair of lion mask handles picked-out in black glaze, all supported on a 'false' tall flared foot, the base with an apocryphal Chenghua mark, covered overall in an even pale green celadon glaze - height 12 3/4 in., 32.3 cm - Estimate : 6,000 - 8,000 USD 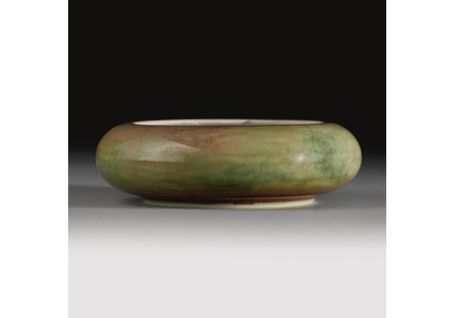 of compressed circular form, the incurved rounded sides covered with a mottled red 'unripe peach' glaze with areas of white and pale lime green flecks, thinning slightly at the rims, the interior and base glazed white, the base inscribed with a six-character reign mark in underglaze-blue - diameter 4 3/4 in., 12.1 cm - Estimate 7,000 - 9,000 USD