painted to the center in bright enamels and underglaze-blue with a yellow and a red dragon alternating with two phoenix all confronting on a chrysanthemum bloom borne with other flowers on leafy stems, the well and exterior with a similar design in a continuous band, the base with an apocryphal Xuande mark in underglaze blue - diameter 10 1/2 in., 27 cm - Estimate 6,000 - 8,000 USD

NOTES: For a Ming prototype of this dish compare a Wanli dish with a single dragon and phoenix in the Metropolitan Museum of Art, illustrated by Suzanne Valenstein, A Handbook of Chinese Ceramics, 1989, pl. 185. of baluster form, the exterior painted in underglaze-blue, green enamel and iron-red with a meandering peony scroll above a feathery scale ground - height 11 in., 28 cm - Estimate 5,000 - 7,000 USD boldly painted around the flared neck with a scholar presenting a rhinoceros horn libation cup to a lady above a band of detached peony and day lily sprigs around the middle, and branches of peaches and pomegranate around the foot - height 20 1/4 in., 50.5 cm - Estimate 15,000 - 25,000 USD each brightly decorated around the exterior with a continuous scene depicting a female dancer and musical troupe performing to an elegant seated maiden, the domed covers with five boys dancing in a garden and surmounted by a lotus bud finial (4) - height 20 1/2 in., 52 cm - Estimate 50,000 - 70,000 USD 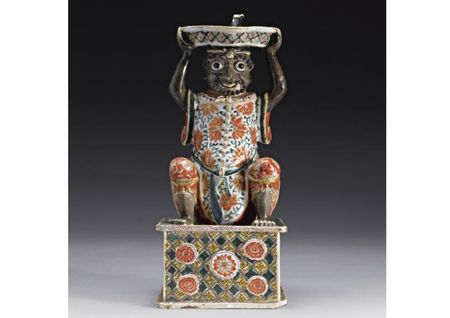 modeled as a squatting bearded dark-skinned foreigner, holding a quatrefoil jardiniere above his head, the pedestal decorated with florets on a lattice ground - height 12 in., 30.5 cm - Estimate 15,000 - 20,000 USD of square section, the top applied with a prunus branch handle on a dense ground of leafy lotus scrolls in yellow, blue and aubergine enamels, the base with boldly painted bamboo sprays, the two ends with circular openwork coin designs - length 14 1/8 in., 35.9 cm - Estimate 6,000 - 8,000 USD

NOTES: Compare a similar piece, with a qilong handle on top, attributed to the mid-Kangxi period and referred to as a 'box for perfumed herbs', illustrated in Warren E. Cox, The Book of Pottery and Porcelain, New York, 1944, vol. II, p. 577. Another scroll weight of this type with a similar prunus branch handle, was sold in ou rLondon rooms, 18th February 1964, lot 255. each with deep flared sides, the central well with a lush floral bouquet encircled by radiating blue-enameled lappets, surrounded by two registers of flora and fauna within cartouches, interspersed with lotus heads and elaborate tripod censers, the interior rim with a broad band of flowerheads and qilin reserved on a floret diaper ground, the reverse with stylized scrolling lotus, the recessed base with a lingzhi mark in underglaze-blue (2) - diameter 25 in., 63.5 cm - Estimate 60,000 - 80,000 USD

NOTES: Famille-verte dishes of this design are rare and the present pair is notable for its impressive size. A closely related dish, lacking a reign mark, from the John D. Rockefeller III collection, was sold at Christie's Hong Kong, 27th May 2009, lot 1872. For a similarly composed dish of smaller proportions see one included in the exhibition Ausstellung Chinesischer Kunst, Gesellschaft fur Ostasiatische Kunst, Berlin, 1929, cat. no. 895; and another sold at Christie's New York, 18th September 2003, lot 295.

Compare also a smaller famille-verte dish of similar design, but with only one band of flowers in panels encircling the central flower basket, published in Toji no Tozai Koryu, Tokyo, 1984, pl. 114; and a blue and white dish with two rows of radiating petal-shaped panels enclosing flowers surrounding a central floral medallion, with a Kangxi reign mark and of the period, sold in our London rooms, 20th March 1979, lot 28.

The inspiration for this paneled decoration may have come from kraak-type blue and white porcelain made for the export market from the sixteenth century; see an example illustrated in Regina Krahl and John Ayers, Chinese Ceramics in the Topkapi Saray Museum, vol. III, London, 1986, pl. 2300. finely painted in the center in underglaze-blue and gilding with the Royal arms of France encircled by the Collars of the Orders of Saint-Michel and Saint-Esprit, within an iron-red and gilt foliate scroll band and sprays of lotus flowers supporting dishes of fruit around the rim - diameter 15 in., 38.2 cm - Estimate 30,000 - 40,000 USD

NOTES: The circumstances surrounding the original commission of this early armorial service are unclear. Surviving pieces include candlesticks, large saucers dishes and chargers, unusual serving pieces such as spice boxes and cruets stands and even a bidet, although the dearth of surviving 'ordinary ' pieces such as plates perhaps suggest a service made primarily for display than for use. It has been suggested that the service was ordered for Louis XV (1710-74), possibly through his Regent, Philippe d'Orléans, who owned a similar service with his own arms. However, since, according to Ronald W. Fuchs and David Howard, Made in China, p. 93, no. 53, it "does not appear in the Royal Inventories of 1718, 1729 or 1775", it may never have been delievered to the King.

A wine cooler and a pair of jars and covers from the service were in the Collection of Khalil Rizk, sold in these rooms, 25th April 2008, lots 3 and 4. the tall sides rising to a slightly flared rim, painted to the interior in famille-verte palette with a lotus pond scene in the center, with a border of lotus and floral motifs below the rim, the cavetto carved with lotus flowers and leaves, the exterior with panels of 'Precious Antiques' in iron-red and underglaze-blue, reserved on a cafe-au-lait ground, all supported on a straight foot - diameter 9 in., 22.9 cm - Estimate 4,000 - 6,000 USD the wide cylindrical body painted in brightly colored enamels with a continuous scene of the sleeping Tang emperor Xuanzong dreaming of the demon queller Zhong Kui catching the emperor's flute and a purse stolen from the imperial consort Yang Guifei who is dancing in front of the study pavilion - height 5 7/8 in., 15 cm - Estimate 8,000 - 12,000 USD each vase boldly painted around the exterior in the famille-verte palette with stands bearing flower-filled vases alternating with gourd-form pendants, the neck decorated with an undulating design of scrolling stems and leafy flower scrolls, all on a coral red ground (2) - height 11 3/4 in., 30 cm  - Estimate 10,000 - 15,000 USD

NOTES: Compare a similar pair of vases of the same design from the J.P.Morgan Collection sold at in these rooms, 30th and 31st March 1955, lot 245.