Thinly potted and delicately painted with Su Jin kneeling on a mat with an open sutra and wine cup before him as he prays to a statue of Budai set upon a table, the scene separated from a fourteen-character insciption and seal (shang) by a banana tree and rock.

Note: The poem may be read, 'Su Jin abstains from meat before his embroidered scroll of the Buddha, but when in his cups he often loves to offend against the rituals.' On this cup the figure of Budai represents Maitreya Buddha. A similar blue and white cup is illustrated by P. Moss, Between Heaven and Earth, Sydney L. Moss Ltd., London, 1988, no. 40 (one of two cups), where the author refers to the substitution of a figure of Budai with that of an embroidered scroll as "artistic license". This cup was later sold in our Hong Kong rooms, 1 December 2009, lot 1895. The body and neck decorated with vignettes of various flowers, birds and animals framed within petal-shaped reserves, leaf mark on base. Painted with a celebratory gathering centered by an elderly couple in yellow robes seated in front of an altar table and surrounded by many figures, including scholars and children, below a diaper band on the shoulder and landscape on the neck. Each with deep sides rising to a flared rim, painted on the exterior with four different fish swimming amidst water weeds and with an iron-red fish on the interior, wood stands .

Provenance: Acquired from Earl and Irene Morse in 1972.

Notes: Compare the bowl of comparable size and shape also decorated with similar types of fish illustrated in Kangxi Porcelain Wares from the Shanghai Museum, Shanghai, 1998, no. 117. The Shanghai bowl has four fish on the exterior, but without the water weeds, and four fish on the walls of the interior above an iron-red carp in the center, which is very similar to that in the center of the present bowls. Incised in the biscuit with six dragons leaping full face amidst clouds in pursuit of flaming pearls, all covered in green glaze and reserved on an opaque white ground, with a lengthy collector's inscription incised on the base.

Note : The inscription is that of a collector and may be translated, 'This vase, named Shigu, not yet stored in the ground, was obtained in mid-summer of the yihai year of Guangxu. May my descendants treasure it. Carved by Yongzhisanren.' The date in the inscription corresponds to 1875.

The shape and unusual decoration of this meiping are based on Ming prototypes such as the example with Hongzhi mark in the British Musuem illustrated by S. Jenyns, Ming Pottery and Porcelain, London, 1953, pl. 76B, and another dated 15th/16th century illustrated in The 15th Anniversary Catalogue, Idemitsu Museum of Art, Tokyo, 1981, no. 890. See, also, the Ming example illustrated in Special Exhibition of Dragon-Motif Porcelain, National Palace Museum, Taipei, 1983, no. 44. On the Ming meiping the dragons are shown in profile. Painted on the interior in doucai enamels and gilding with a bird perched in a tree gazing at a butterfly beside a rocky outcrop from which springs bamboo and a stem of composite flowers, within double line borders below four shaped reserves enclosing further floral sprays reserved on a diaper ground, the reverse with two floral sprays painted in underglaze blue, iron red and green glaze, Japanese wood box. The center incised with two dragons contesting a flaming pearl, with four pendent clusters of grapes painted on the exterior, all in aubergine and green reserved on a pale egg yolk-yellow ground.

Note: A Kangxi-marked dish of this pattern was included in the exhibition, The Wonders of the Potter's Palette, Hong Kong Museum of Art, 1984-1985, no. 24. Another in the Percival David Foundation, is illustrated by M. Medley in the Catalogue, Section 5, 1978, pl. XII, no. 146. 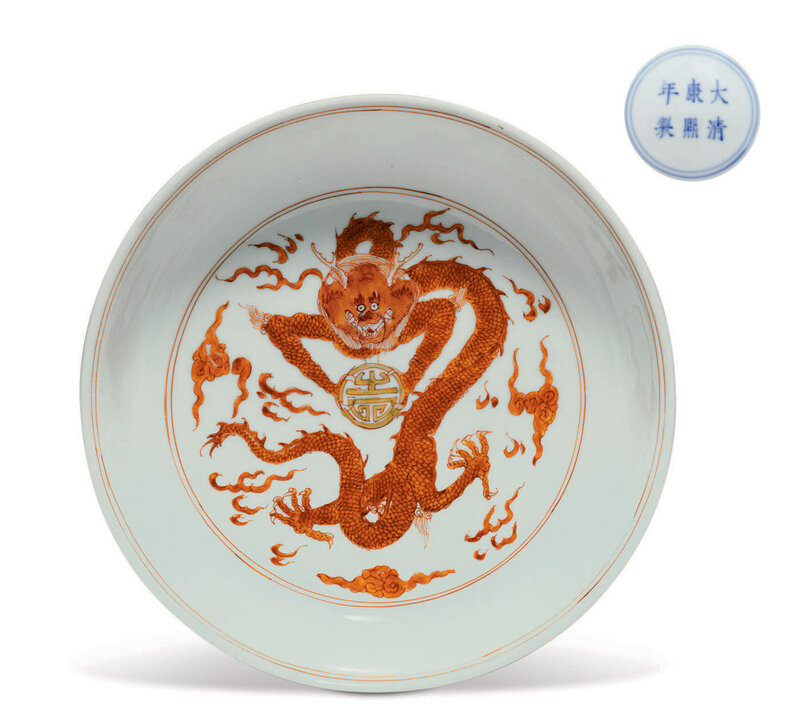 The interior painted in iron red with a leaping dragon holding a gilt shou character, with two further dragons chasing flaming pearls on the exterior.

Note: A similar dish is illustrated in Kangxi Porcelain Wares from the Shanghai Museum Collection, Hong Kong, 1998, no. 184.