A magnificent 14.6 carat diamond pendant expected to fetch £200,000 - 300,000 is to be sold at Bonhams, New Bond Street as part of its first Fine Jewellery sale of the year on 21st April 2010. It's accompanied by a certificate from GIA stating that the pear modified brilliant-cut diamond is very light pink, natural colour, internally flawless clarity. Certificate number 5111665223, dated 12th February 2010. It follows Bonhams Jewellery Department's most successful year ever in 2009 which finished with the December 9 sale - The Art of Jewels: Fine Jewellery and Iconic Gems - in which a natural pearl necklace once belonging to Lady Houston fetched £311,200.

The first sale of fine jewellery in 2010 hopes to imitate this success. Jean Ghika, Director of Bonhams Jewellery Department, says: "We are delighted to be handling such a selection of exceptional diamonds, with estimates ranging from £55,000 – 300,000, as well as a number of rare Art Deco period pieces, for which competition is expected to be fierce."

Of particular interest is a silver gilt paste and gem-set collar necklace which is similar to the work of the 20th century jeweller Sah Oved. It is expected to fetch £3,000 – 5,000. The openwork collar of neo-Gothic gilded tracery, set to the centre with a row of red paste and silver Tudor roses, the largest to the centre within a quatrefoil frame, suspending a graduating fringe of smokey and rose quartz crystals, each with a cap of stylised foliate and beadwork decoration, alternating with lapis lazuli beads and drop-shaped pendants, unmarked, length 44.5cm., handmade fitted case. This necklace is comparable to the work of the 20th century British jeweller, Sah Oved (1900-1983) who was responsible for some of the most original and striking designs created before the Second World War. Of particular note is the pioneering use of rough crystals which was also a feature of Sah's early work. The silver leaves set with red paste are similar in execution to those on a silver cross, made by Sah Oved, around 1920. 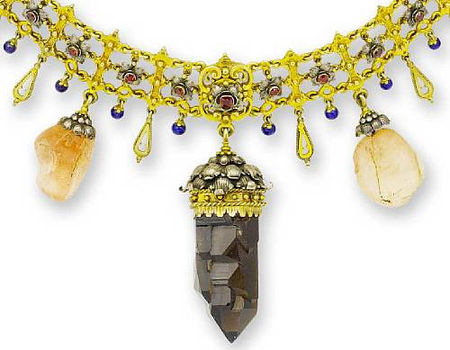 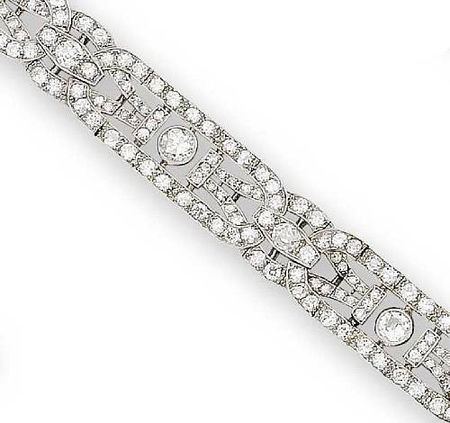