Of gourd form with small recessed shaped foot, carved in relief with leafy vines and a beetle, the tourmaline stopper carved as a branch. 2in (5.3cm) high. Sold for $7,320 inclusive of Buyer's Premium

The bottle gourd (hulu 葫蘆) is a popular motif in Chinese art. As it contains hundreds of seeds, it has become synonymous with fertility and is believed to bring hundreds of sons (hulu baizi 葫蘆百子). The bottle gourd's network of vines and tendrils (mandai 蔓帶) symbolizes persistence and continuance and can be used as a rebus for wandai 萬代(ten thousand generations). For further discussion, see Bartholomew, Hidden Meanings in Chinese Art (2006), p. 61. 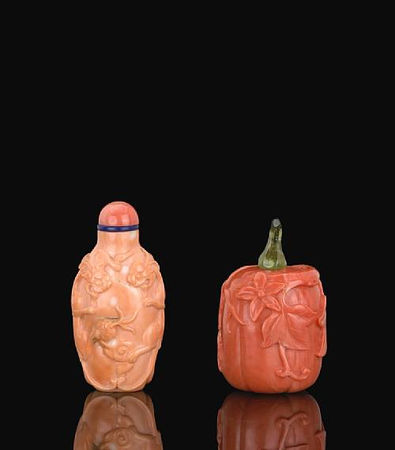