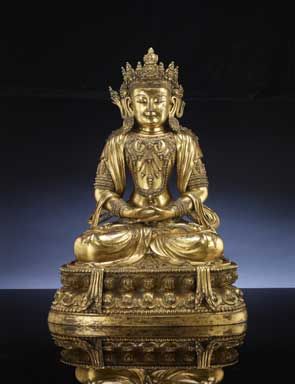 HONG KONG.- The 14th Hong Kong sale of Imperial Chinese Ceramics and Works of Art on Monday 31 May 2010 illustrates the depth of Christie’s experience and longstanding commitment to this rich and vibrant area of Asian Art. Demand is strong for the finest, rarest and most beautiful works in this category and Christie’s is proud to present a sophisticated sale tailored to the specific tastes of the world’s most discerning collectors. Long established connections with institutions and owners of private collections in Europe and America enable Christie’s to source exemplary works, many of which are offered at auction for the first time and are only available from the West. Spanning the Western Zhou period (c.1100-771BC) to the early 20th century, this auction features over 250 lots: from gilt bronzes, Buddhist art, Imperial ceramics, jade and carpets, to textiles and palace furnishings. Leading the sale is a magnificent imperial early Ming gilt-bronze figure of Amitayus, Xuande incised six-character mark and of the period (1403-1425) (estimate on request), which is one of the most important examples ever to be offered at auction. With estimates ranging from HK$30,000/US$4,000 to in excess of HK$30million/US$3.9 million, the sale is expected to realise in the region of HK$400 million/US$51.8 million.

The introduction of Buddhism into China constituted one of the greatest impacts on the country facilitated by the overland trade routes which spread extensively across the whole of Central Asia, known collectively as the Silk Road. Through the long, arduous and invariably dangerous journeys that could last for years, monks and devotees brought back religious manuscripts, scriptures and icons. When Buddhism first took root in China around the 3rd and 4th centuries of the Christian era, the form and content of its art bore the traces of this Central Asian iconic journey. However, by the 6th century, Chinese Buddhist sculpture began to disassociate itself from foreign models in favour of the Sino-form facial features and distinctive style of dress. As the faithful believed that making Buddhist images would earn one’s place in the Tusita heaven, a large number of sculptures were produced, carved in either stone or wood and cast in bronze. The iconography of these Buddhist images were largely transfigured by later Chinese emperors whose devotion manifested itself through the art form. Infact several emperors were thought to be the incarnations of the Bodhisattva.

The top lot of this sale, a magnificent and highly important Imperial early Ming gilt bronze figure of Amitayus, Xuande incised six-character mark and of the period (1403-1425) (estimate on request), is an exceptional example from a group of exceedingly fine gilt-bronze sculptures commissioned by the Imperial court during a brief period in the early 15th century, during the Yongle (1403-1435) and Xuande reigns. Emperor Yongle actively courted Tibetan hierarchs and persuaded them to visit China, resulting in the development of Chinese style gilt-bronze Buddhist images. This figure of Amitayus, the ‘Buddha of Infinite Life’, is one of the most significant large imperial Ming gilt-bronzes of its type. Beautifully festooned with an elaborate, bejeweled necklace, the Buddha is seated; legs crossed in the lotus position, on an integral double-lotus base which is inscribed with the characters Daming Xuande Nianshi, ‘Bestowed in the Great Ming Xuande period’ (1426-1435). Inspired by Tibetan bronzes, this gilt-bronze also illustrates distinct Chinese stylistic developments. Two further significant Buddhist works featured provide examples dating to dynasties predating, and subsequent to this star lot, providing valuable insight and understanding into the developments and also rich and varied depth of this devotional art form within China’s history.

Chinese iconographic elements were already a strong feature in Buddhist art in the Song dynasty (960-1279), 12th century. This is exemplified by the impressive, carved, polychrome wood figure of a seated Avalokitesvara, better known as the ‘Watermoon’ Guanyin, ‘Hearer of the Cries of the World’ (estimate: HK$5,800,000-6,500,000/US$750,000-840,000). Such larger-than-life constructions are particularly associated with Shanxi province in northern China where the two pre-eminent centers of Buddhist activity were located at the time, in Taiyuan and the Wutai Mountain. Providing a compelling vision of the Bodhisattva ideal, this figure’s facial features are naturalistic, with gentle eyes looking down, whilst the voluminous yet relaxed body is seated at ease with one arm gently resting on a raised knee.

Tibetan influences were particularly strong during the Qianlong period, both for religious and political reasons due to the Imperial court’s close ties with kingdom of Tibet. Emperor Qianlong (1736-1795) was a devout LamaistBuddhist who regarded himself as the re-incarnation of the Mansjuri, the Bodhisattva of Wisdom. A special feature of the period was the construction of miniature Buddhist shrines in the shape of a pavilion or pagoda. An exceedingly rare example of this is demonstrated by an imperial zitan shrine from the JM Hu collection (estimate on request), which was probably commissioned by the Emperor himself. The shrine is crafted in purple sandalwood, a highly prized and expensive hardwood that had to be imported into China from Southeast Asia. It is embellished with a pair of ascending gilt metal dragons coiled around two frontal posts. The interior panel bears and inscription, ‘By Imperial Command, in praise of the Dashixiang’. The Dashixiang is better known as Guanyin. The Imperial ceramics offered at Christie’s in spring 2010 celebrate the superb enameled works from three generations of Qing dynasty emperors: Kangxi (r. 1662-1722), Yongzheng (r. 1723-1735) and Qianlong (r. 1736-1795). Ceramics from the Kangxi period are renowned for their innovative style combined with the adoption of techniques developed during the Ming period. A good example is the elegantly shaped baluster green and yellow ‘dragon’ vase from the Kangxi period (estimate: HK$7,000,000-9,000,000/US$900,000-1,200,000). Its finely formed rounded body which tapers to a slender neck is distinctly Qing in origin, whilst the decorative technique of laying a green-enamelled dragon over a yellow enamel ground takes inspiration from earlier 15th century Ming ceramics.

Ceramics from the Yongzheng period are exceptionally well formed and enamelled, as demonstrated by a pair of exquisite famille rose eight peaches dishes that was once in the collection of the Woolworths department store heiress, Barbara Hutton, before being in the possession of the Hong Kong shipping magnate, T. Y. Chao (Estimate HK$8,000,000-10,000,000/US$1,000,000-1,300,000). It is characteristic of Yongzheng porcelains to start a design at the exterior foot of the dish and then continue over the rim and into the interior. This style of decoration would have been challenging for the artists, as obtaining a harmonious and balanced design would have been particularly difficult. Decorated with a total of eight peaches growing from flowering branches and accompanied by five bats, this design forms the auspicious wufu which provide rebuses both for good fortune and for the Five Blessings of longevity, health, wealth, love of virtue and a peaceful end to one's life. Enamelling techniques at the Imperial workshop reached a zenith during the Yongzheng reign as can be seen in an exceedingly rare pair of Beijing enamelled facetted vases (estimate: HK$5,000,000-7,000,000/US$650,000-900,000). Each of these miniature vases is exquisitely painted and stippled with delicate enamel colours, executed on a copper body to depict vignettes of geese amid flowers on a river bank. Unusually these vases are furnished with their original pierced white jade covers, enabling the floral stems to be held in place. Another form of enamelling technique that found much favour with Emperor Yongzheng was the doucai palette, where enamel colours were juxtaposed with each other. This resulted in interesting and subtle decoration as demonstrated by this extremely rare vase, decorated with stylised Indian lotus flowers (estimate HK$5,000,000-7,000,000/US$650,000-900,000). The doucai decorative technique was first developed in the Ming dynasty Xuande period (r. 1426-35) and later perfected in the Chenghua reign (r. 1465-87). The present vase appears to be unique in its shape and pattern. The shape is derived from Chenghua prototypes although the pronounced lip and spreading base are Qing variations. 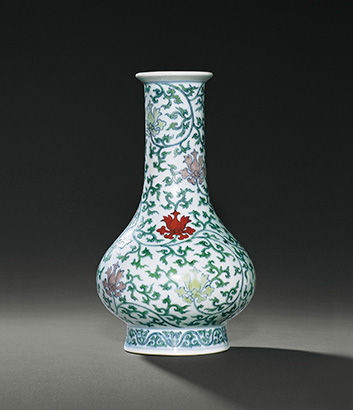 In the Qianlong period (r. 1736-1795) the famille rose palette, of soft shaded enamel colours, was applied extensively on ceramics. The Qianlong emperor was a prolific collector and connoisseur of art. Among the ceramics that were produced during his reign period, a number were made with archaism in mind. A famille rose ‘Chicken’ cup, dating to 1766, is a good example of this. It bears a mark on the underside base reading: Daqing Qianlong Fanggu, ‘Made in Imitation of Antiquity in the Qianlong Period of the Great Qing’ (estimate: HK$1,500,000-2,000,000/US$200,000-260,000). Rare cups of this type were produced at the imperial kilns in reverence to doucai examples of this chicken theme that were made in the Chenghua reign.

Exquisite blue and white porcelain is represented by two key examples. Classics from the Ming dynasty are exemplified by a very rare Chengua period stembowl formerly from the collection of Mr Robert Chang (estimate: HK$6,000,000-8,000,000/US$780,000-1,000,000). This is the period when Imperial ceramics are recognised to have reached the peak of perfection, epitomized by the fine clay material, well controlled potting and superb painting quality. Throughout history Chinese ceramics from the Chenghua reign have been, and continue to be, highly sought after by collectors. The design of scrolling lotus is well-known on 'palace bowls' of the Chenghua period, although as a decorative motif on a stembowl the present lot is unique. A further Ming work is a fine bowl, Lianzi Wan, of the Yongle period (estimate: $2,000,000 –3,000,000/US$260,000-390,000), which is decorated with lotus petals, fruiting loquat, camellias and chrysanthemums and closely relates to examples in the Palace Collections in Beijing. The Qing emperors were inspired by the porcelains of the Ming dynasty and looked to the past to perfect techniques pioneered by their predecessors, as demonstrated by a rare Qianlong underglaze blue and copper-red moonflask (estimate: HK$4,000,000-6,000,000/US$520,000-780,000), with its striking dragon design. This was, until recently, in a private European collection, having been acquired in the early 20th century. Throughout China’s long history jade has held an elevated importance in Chinese culture, and was once regarded as more valuable than gold. Jade is a dense stone which can be ground to produce smooth, soft surfaces and glows in varied subtle shades of creamy white, green, grey and brown. From as early as the Neolithic period (c.6500-1700BC), it was thought that this precious stone was imbued with magical powers which protected the human body. Throughout the Tang to Qing dynasties (AD 618-1911) jade carvings and ornaments were exclusively reserved for the elite and those in positions of power. Admiration for jade continues today with modern collectors now appreciating the stone for its density, translucency, tactile and aural qualities, and its subtle visual properties. Another highlight of the sale is a magnificent emerald green jadeite tripod censer and cover dating to the early 20th century (HK$10,000,000 -15,000,000/US$1,300,000-2,000,000). Jadeite is not found in China and was first imported in to China from Burma during the late Qianlong period. Jadeite has a more brilliant colour spectrum than nephrite with a glass-like translucency, the rarest and most precious is emerald green coloured jadeite exemplified in this work; it was the most prized at the Qing court and remains true for collectors today.