A Collector's Menagerie: Animal Sculpture from the Ancient World

A Collector's Menagerie: Animal Sculpture from the Ancient World Ever since he first drew on the walls of his cave, man has had the desire to depict the creatures around him. The Sladmore Gallery, 57 Jermyn Street, St James’s, London, is renowned for exhibiting animal sculpture from the last 200 years, and has now invited Rupert Wace Ancient Art to introduce collectors to a veritable menagerie from the ancient world, spanning a period of some 2,400 years. A Collector’s Menagerie: Animal Sculpture from the Ancient World will be on view from Wednesday 12 to Friday 28 May 2010. Around 70 important and appealing pieces will be offered for prices ranging from £1,000 to over £150,000.

The earliest piece in the exhibition – a stone head of a goat – dates from the 3rd millennium BC and comes from a larger figure from Bactria, the ancient name of an area between the Hindu Kush and the Oxus river in present-day north Afghanistan. (fig. 1) The most recent is a Byzantine bronze finial in the form of a dove dating from around the 5th century AD, possibly an early Christian piece representing Noah’s Dove, a symbol of resurrection. (below) Bronze finial in the form of a dove. Byzantine, circa 5th century AD. Height: 8 cm

Birds and animals played an important role in every aspect of ancient Egyptian culture. They believed that the world was inhabited by unseen powers and forces which could be made manifest by the behaviour and characteristics of living creatures. Thus, deities could take the form of animals though, even if a deity adopted a certain animal form, not all members of that particular species were sacred. Some animals were never associated with a deity but had a symbolic significance while others appear only as hieroglyphic signs in the written Egyptian language.

One of the best known Egyptian gods is Bastet represented by the cat and, indeed, the most prized piece in this exhibition is a handsome bronze mummy mask of a cat’s head, its large scale indicating that it would have belonged to a particularly important or venerated cat. Dating from the Late Dynastic Period, 25th-31st Dynasty, 715-332 BC, it was formerly in the Albright-Knox Art Gallery, Buffalo, New York, the bequest of Arthur B. Michael, 1941. (top blow) The female cat came to be associated uniquely with Bastet, an ancient goddess worshipped at Per-Bastet (Bubastis) in the Delta. The seated cat, an example of which is also included in this show, represents the goddess on earth and would have been the focus of ritual and worship in the temple. (below) Other Egyptian animals and birds represented in the exhibition include bulls, baboons and crocodiles, falcons, vultures, ibis and owls, and these, like the cat, either represent gods or goddesses or are important protectors of the king. The materials used to represent them vary from gold and bronze to wood and terracotta.

The bull was revered for its belligerence, savagery and virility and from the earliest Dynasties was associated with the king as slaughterer of Egypt’s enemies. It was an animal form which was also associated with three major Egyptian deities, the most important being the Apis bull at Memphis, the double on earth of the creator god Ptah. Only one was alive at any one time and was installed next to the temple of Ptah at Memphis where it was supplied with a harem of cows, fed choice morsels, visited by pious worshippers and delivered oracles. A fine bronze statuette of such a bull, dating from the Late Dynastic Period, 25th-31st Dynasty, 715-332 BC, is included in the exhibition. (below) 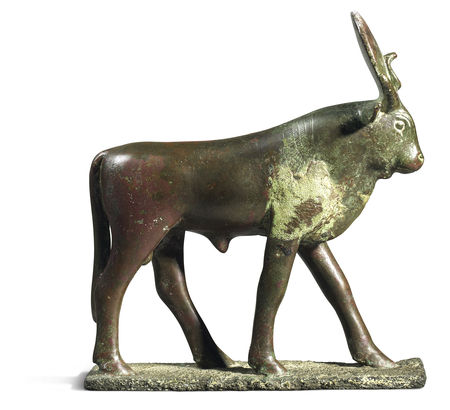 The crocodile represented the god Sobek and was feared as a destroyer of the corpse, denying the deceased an afterlife. Because of its speed in catching its prey, the reptile came to symbolise royal might and, as its natural environment was the waters in which creation began, it also had regenerative associations. A rare bronze statuette of a crocodile in the exhibition dates from the Ptolemaic Period, 332-30 BC.

The baboon was the form adopted by both Egyptian lunar gods, Khonsu of Thebes and Thoth of Hermopolis in Middle Egypt because of its curious behaviour at dawn when it sat on its hind legs, waved its front paws in the air and screeched thus making it a lunar creature as well as a creature of the sun with foreknowledge of the sun’s arrival. The exhibition includes a bronze baboon sitting on top of a column, dating from the Late Dynastic Period, 25th-31st Dynasty, 715-332 BC. (below) Thoth was the only god who adopted the animal manifestation of the ibis. The species, which is no longer extant in Egypt, was embalmed in huge numbers during the Late Period and images abounded. The exhibition includes an impressive example in bronze and wood, particularly notable for its size and superb finish, from the Late Dynastic Period, 25th-31st Dynasty, 715-332 BC. The head, legs and feet are chased bronze while the body is painted and gessoed wood. (below) The falcon was revered from earliest times and was also strongly associated with creation and regeneration and was therefore a form adopted by a number of Egyptian gods. The exhibition includes two fine examples of idealized falcons, both dating from the Dynastic Period. The largest, from the 25th-31st Dynasty, 715-332 BC, is made of wood while the other, from the 26th Dynasty, 664-525 BC, is of bronze. (below) Over the centuries and across the various ancient civilizations, animal forms have served as vessels, inspired decoration or even played a functional role. For example, a terracotta rhyton or drinking vessel from the Amlash region of the Gilan province, 1100-800 BC, takes the form of a Zebu or humped bull, while a bronze rhyton from Luristan (in present-day Iran), circa 6th century BC, is shaped as an elongated cow’s head.

The delightful painting of fish on a Greek terracotta red figure plate is attributed to the Hippocamp Painter, 320-300 BC. (below) Dating from the 5th-4th century BC, a bronze sleeve weight or amulet from Inner Mongolia is distinctly feline and, like the rare bronze hound head terminal which was probably a chariot fitting, dating from 1st-2nd century AD, has survived and is appreciated as a stunning sculpture in its own right. (below) Bronze sleeve weight or amulet in the form of a feline, Ordos. 5th-4th century BC. Diameter: 5.6 cm Animals also feature prominently in items intended for adornment, objects that were prized possessions and symbols of status such as the Egyptian gold amulet in the form of a vulture, dating from the Third Intermediate Period, Late Dynastic Period, circa 1000-300 BC, or the Roman amethyst pendant in the form of a cockerel, which would look as charming today on a gold chain as it would have in the 2nd century AD when it was made. (below) Some works seem to have been created for the enjoyment they would give, such as the charming Near Eastern bronze frog dating from the late 1st Millennium BC. 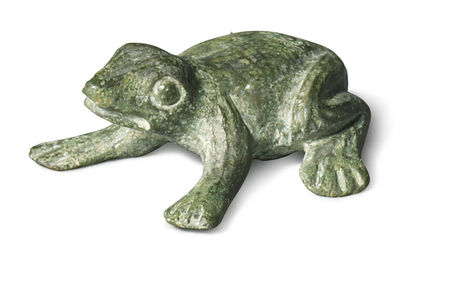 Even the humble fly or cicada is embodied on a 3rd century AD Roman silver fibula. (below)