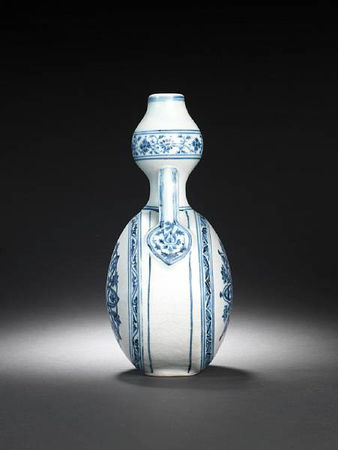 Modelled after a Middle Eastern prototype, each domed face well painted illustrating the characterstic 'heaping and piling' with an eight-pointed lappet starburst, one face with overlapping palmettes and radiating from a central petal medallion enclosing a yinyang motif, the other face interlaced with ruyi-shaped lappets encircling the medallion with inward-pointing petals, all encircled by a narrow foliate scroll band on one side and a classic scroll on the other, the upper bulb with a composite floral scroll of pinks and chrysanthemum blossoms, the applied ridged loop handles terminating with ruyi head terminals painted with a lotus spray.25.8cm (10⅛in) high. Estimate: £90,000 - 120,000, HK$1,100,000 - 1,400,000

Notes: Moonflasks of this type are known in important museum collections: one of a similar size, attributed to the Xuande period is illustrated in the The Complete Collection of Treasures of the Palace Museum: Blue and White Porcelain with Underglaze Red, Hong Kong, 2000, pl.95; another similarly attributed from the Shanghai Museum is illustrated by Wang Qing-zheng, ed., Underglaze Blue & Red, Hong Kong, 1987, pl.52; see another illustrated by J.A.Pope, Chinese Porcelains from the Ardebil Shrine, London, 1981, pl.55, no.29.458, now in the Tehran Museum; and also from the Percival David Foundation, British Museum, London, illustrated by D.Lion-Goldschmidt, Ming Porcelain, London, 1978, pl.35.

A larger (32.5cm) moonflask attributed to the Yongle period, and with a less bulbous upper bulb, was sold at Christie's Hong Kong on 28 November 2006, lot 1512.

Whilst many similar moonflasks are often attributed to the Xuande period, following the marked examples, a late Yongle dating should not be ruled out as the Xuande moonflasks were a continuation of similar earlier flasks, compare a Yongle moonflask excavated at Dongmentou, Zhushan, illustrated in Chang Foundation, Imperial Hongwu and Yongle Porcelain Excavated at Jingdezhen, Taipei, 1996, pl.65. The critical determining feature appears to be the shape of the very shallow footrim. It seems to be well-established, following considerable study, that a Yongle foot profile is oval; a Xuande one is rectangular. In the case of this vase, the oval foot suggests a Yongle date, while the decoration suggests a Xuande date in comparison with other published examples. It is therefore reasonable to suggest that this vase spans the change in Emperor, in the mid 1420s.

These moonflasks were made primarily for export or as gifts to Near Eastern rulers. For the origin of its shape and decoration see J.Pope, 'An Early Ming Porcelain in Muslim Style', Aus der Welt der Islamischen Kunst, Festschrift fur Ernst Kuhnel, 1959; B.Gray, 'The Influence of Near Eastern Metalwork on Chinese Ceramics, Transactions of the Oriental Ceramic Society, London, 1940-41, vol.18, p.57 and pl.7F; and M.Medley, 'Islam and Chinese Porcelain in the 14th and Early 15th Centuries', Bulletin of the Oriental Ceramic Society of Hong Kong, no.6, 1982-84, fig.11. 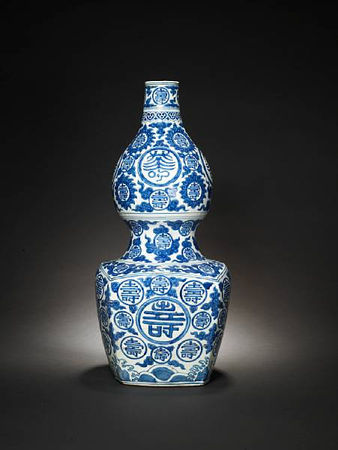 Notes: The Jiajing Emperor was a devout Daoist and his preoccupation with the attainment of long life is visible in the works of art produced under his reign. The double-gourd is a popular symbol of longevity and is associated with the Daoist Immortal Li Tiegui, who is depicted holding a double gourd containing the elixir of immortality. The 'Shou' medallions, meaning 'longevity', further emphasise this symbolic quest for immortality. Each of the four sides painted with a lobed panel enclosing a single writhing dragon, framed in each of the four corners by peony, chrysanthemum and lotus sprays within double borders, the base with recessed glazed panel with six-character reign mark. 18.1cm (7in) wide. Estimate: £14,000 - 16,000, HK$170,000 - 190,000 Notes: The dating of this lot is consistent with the result of a thermoluminescence test, Oxford Authentication Ltd, no P102u12.

This unique design is more commonly associated with ewers, and the existence of one in the Lee Kong Chian Art Museum, National University of Singapore with a Jiajing reign mark allows the group to be dated confidently to between 1522 and 1566. Another unmarked example can be found in the British Museum, London, illustrated by J.Harrison-Hall, Ming Ceramics in the British Museum, London, 2001, p.221, no.9:10. See also another example with Ottoman silver mounts, sold at Sotheby's London, 15 November 2000, lot 229.

Only one 'Magic Fountain' vase, in the Percival David Collection, now housed in the British Museum, appears to be in a published collection: see R.Scott and R.Kerr, Ceramic Evolution in the Middle Ming Period. Hongzhi to Wanli (1488-1620), London, 1994, Catalogue no.48. Another example was sold at Sotheby's London, 17 November 1999, lot 907.

The unusual motif of a beast (usually a qilin) as on the present example, elephant or horse, reclining before a large, ornate fountain has puzzled academics for decades. In 1952 the late Sir Percival David argued a link between these fountains and a large silver fountain designed by Guillaume Bouchier for Mangu Khan at Karakorum in 1254, see Bulletin of the Museum of Far Eastern Antiquities, no.24, Stockholm, pp.1-8. The presence of a similar ewer in a Dutch still life painting by Wilhelm Kalf (1613-1693) illustrates that such ewers had made their way over to Europe by the 17th century, and has led some academics to suggest that the design may have been a commission by the Jesuits in China. 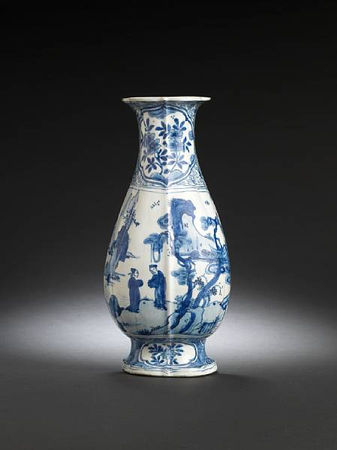 Painted on the body with two scholars engaged in conversation beneath a gnarled pine tree with a riverscape in the background, the splayed foot and flared neck painted with shaped panels enclosing blossoming blooms, on a diaper ground with ruyi heads at the foot and against a ground of scrolling lotus trellises at the neck, the reverse with Chenghua six-character mark. 32cm (12½in) high. Estimate: £6,000 - 10,000, HK$71,000 - 120,000 Each of the four sides painted with pairs of writhing five-clawed dragons ascending and descending amidst flame and cloud scrolls, above a band of petal lappets above the foot, and below a band of ruyi heads at the shoulder, the six-character mark within a double square on the base, the base and neck applied with European gilt-bronze European mounts. The porcelain 14.8cm (5¾in) high. Estimate: £3,000 - 5,000, HK$35,000 - 59,000 A blue and white 'phoenix' saucer-dish. Jiajing six-character mark and of the period. photo Bonhams

The shallow curving sides rising from the unglazed foot ring, the interior painted in rich vibrant tones of underglaze blue with a central medallion enclosing a pair of phoenix amidst scrolling lotus, the exterior sides painted with a similar pair of phoenix in mutual pursuit. 19.5cm (7¾in) diam. Estimate: £3,000 - 5,000, HK$35,000 - 59,000 A blue and white bowl. Wanli six-character mark and of the period. photo Bonhams

Painted around the steep sides with alternating plantain trees and bamboo, the interior centred with a medallion enclosing pomegranates issuing from leafy stems and encircled by blossoming chrysanthemums, peony and poppies, all below a lingzhi scroll at the rim. 23.9cm (9½in) diam. Estimate: £3,000 - 5,000, HK$35,000 - 59,000

Provenance: according to the family, purchased by Paul Lauder in Asia circa 1934, and thence by descent 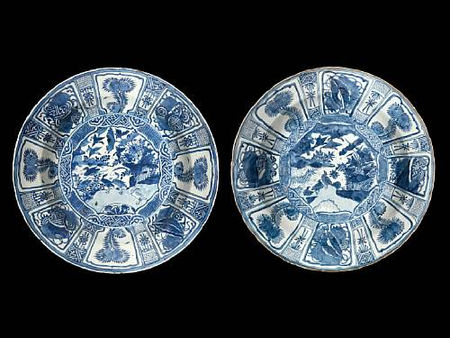 Each with steep flaring sides, painted with a central medallion depicting ducks in a lotus pond, enclosed by a petal-shaped border of alternating panels of key-fret and diaper grounds, the shaped rim painted with lotus-shaped panels alternately enclosing chrysanthemums, artemesia leaves and groups of scholar's objects. 49.2cm (19¼in) diam. (2). Estimate: £3,000 - 5,000, HK$35,000 - 59,000
:
Provenance: the first: Mrs W.S.Halsey
Acquired by the present owner's father between 1910 and 1920, and thence by descent Raised on a short, straight foot, finely painted around the exterior with two scholars and three kneeling figures within a landscape, all with arms raised and heads bowed in prayer, looking out over a misty riverscape, all below an incised band of floral scroll at the shoulder, wood stand and cover. 17.8cm (7in) high (3). Estimate: £3,000 - 4,000, HK$35,000 - 47,000

Provenance: according to the family, purchased by Paul Lauder in Asia circa 1934, and thence by descent With shallow rounded sides, supported on a tapering foot, the interior painted with a central medallion enclosing a qilin by a fenced garden looking at an insect, the cavetto with six cranes amidst cloud scrolls, the underside with six horse medallions, underglaze-blue fu gui jia qi mark (Beautiful vessel for the rich and honourable), box. 29.6cm (11⅝in) diam. (2). Estimate: £1,500 - 2,000, HK$18,000 - 24,000 The gently rounded sides rising from a recessed foot, the interior painted with a seated female figure before a table supporting a mirror, with a large ornamental screen behind, and set within an ornamental garden, the base with lingzhi fungus. 14.5cm (5¾in) diam. Estimate: £1,500 - 2,000, HK$18,000 - 24,000 A small blue and white saucer dish. Wanli six-character mark and of the period. photo Bonhams