To mark its 250th anniversary, Colnaghi is publishing Colnaghi – The History, an illustrated commemorative survey of the world’s oldest commercial art gallery and the only survivor of the grand Old Master galleries in London’s Old Bond Street. During the 250 years of the firm’s remarkable history, Colnaghi has been printseller to the Prince Regent, pioneer of photographic publishing and purveyor of some of the greatest Old Master paintings, drawings and prints to private collectors and museums around the world.

The fascinating story of survival and adaptation began in Paris in 1760 when Colnaghi was founded by an enterprising firework manufacturer, Giovanni Battista Torre, who was rumoured to have invented a type of inextinguishable gunpowder which, it was feared, might be used by the French against the British Navy. In 1783 the young Paul Colnaghi joined the business in Paris before moving to the London branch, based in Pall Mall, in 1786. As a result of the French Revolution the business transferred entirely to London where it became the premier London print dealer before branching out into photography and later concentrating increasingly on Old Master paintings and drawings.

As Jeremy Howard, Head of Research at Colnaghi, writes in his introduction to this publication, “Given such explosive origins, it is perhaps not surprising that the history of this venerable firm has been anything but staid. Despite the aura of respectability, it is a story full of colourful episodes from Paul Colnaghi infiltrating revolutionary France disguised as a sailor to Colnaghi’s being involved in the sale of some of the greatest masterpieces from the Hermitage, the year after the Wall Street crash.” The latter was probably the greatest single art transaction of the 20th century when paintings from Russia’s great museum were sold to Andrew Mellon and became the foundation collection for the National Gallery of Art in Washington.

In 2002, the distinguished German Old Master paintings dealer Konrad O. Bernheimer acquired Colnaghi and joined forces with the pre-eminent Old Master drawings dealer Katrin Bellinger. Together they have built on the reputation for scholarship and connoisseurship of which they are justifiably proud. There is a German saying, Tradition bedeutet nicht die Asche zu bewahren, sondern das Feuer weiter zu geben (Tradition is not about preserving the ashes but keeping the fire going). As co-owners of Colnaghi they are proud of its great reputation and united in their determination to keep the fire going.

Edited by Jeremy Howard, Colnaghi – The History tells the firm’s story in a series of chapters contributed by Timothy Clayton, author of The English Print, 1688-1802; Prof. Dr Berndt Lindemann, Director of the Gemäldegalerie in Berlin; Dr Alan Chong of the Isabella Stewart Gardner Museum, Boston; Cynthia Saltzman, the American art historian whose most recent book is Old Masters, New World; Professor David Ekserdjian, Professor of History of Art at the University of Leicester and trustee of the National Gallery; and the eminent art historian Sir Christopher White. It is illustrated with wonderful reproductions of some of the masterpieces Colnaghi has handled over the last 250 years as well as fascinating portraits of some of the characters who have been involved with the firm.

Timothy Clayton’s research into the early years of Colnaghi traces the history of the transformation of the firm from firework manufacturers and dealers in scientific instruments to printsellers. Founded in Paris in 1760 by Giovanni Battista Torre, an Italian pyrotechnist who oversaw the fireworks for the marriage of the future Louis XVI to Marie-Antoinette, the firm quickly acquired a reputation for scientific instruments, opening a shop in the prestigious rue St Honoré. Early clients included Benjamin Franklin, who bought a pair of spectacles. Under Paul Colnaghi, who joined the firm in the 1780s, the firm moved into printselling, opening a branch in London and eventually moving the whole business there following the outbreak of the French Revolution. From the 1790s Colnaghi became the most successful printseller in London, publishing a best-selling edition of Wheatley’s Cries of London. This success was crowned by Colnaghi’s appointment as printseller to the Prince Regent. In the early 19th century Colnaghi became one of the most fashionable shops in London, patronised not only by high society but also by artists such as Constable and Lawrence. In the late 19th century Colnaghi published William Simpson’s widely admired lithographs of the Crimean War and Gems of the Art Treasures Exhibition, the first photographically illustrated art catalogue. The article draws on unpublished material in the Colnaghi archive, shedding new light on the 18th and 19th century history of one of London’s leading printsellers and photographic pioneers. The transformation of Colnaghi from printseller to major player in the Old Master paintings market was largely the work of the brilliant but little known Otto Gutekunst, director from 1894 to 1939. From letters written by Gutekunst in the Colnaghi archive, Jeremy Howard paints a portrait of a dealer who was at the centre of the art market in the “Gilded Age”, selling masterpieces to American private collectors such as Isabella Stewart Gardner, Henry Clay Frick and Andrew Mellon, as well as to some of the great museums of the world such as the Metropolitan Museum, New York, the Kaiser-Friedrich Museum, Berlin (now the Gemäldegalerie) and the National Gallery in London. He, more than anyone, established Colnaghi’s reputation in this field, challenging the supremacy of rival dealers Agnew’s and Duveen. Assiduous in pursuit of what he called “the big-big big game”, in one year alone Gutekunst bought three Vermeers. His confidential letters to Bernard Berenson and his colleague and business partner, Charles Carstairs of Knoedler, are full of revelations about collectors and dealers during a period of more than forty years which witnessed some of the greatest deals in the history of the art market. Otto Gutekunst (1865-1939), The Berenson Archive, The Harvard University Center for Italian Renaissance Studies, Villa I Tatti, courtesy of the President and Fellows of Harvard College

Chapter 3: COLNAGHI, BODE AND THE BERLIN MUSEUM (NOT FORGETTING FRIEDLÄNDER)

Prof. Dr Berndt Lindemann, Director of the Gemäldegalerie in Berlin, casts new light on Colnaghi’s little known relationship with Wilhelm von Bode, Max Friedländer and the Kaiser-Friedrich Museum in Berlin around the turn of the 19th and early 20th century. Drawing upon material in the Berlin archives as well as Colnaghi’s letterbooks, Dr Lindemann examines the special relationship between the gallery and the Museum and the fascinating stories behind the acquisition of Berlin’s best known masterpieces, such as Vermeer’s The Glass of Wine and Rembrandt’s Preacher Aslo and his Wife. Isabella Stewart Gardner was Colnaghi’s first important American private client. In less than ten years, the gallery sold her some of the greatest masterpieces now in her museum in Boston, including Titian’s Europa, Botticelli’s The Tragedy of Lucretia (America’s first Botticelli) and Cellini’s Bust of Bindo Altoviti. Despite this fact, Mrs Gardner ‘seems to have been largely unaware, or chose to ignore, the close business connections between Colnaghi and her adviser, Bernard Berenson’, according to Alan Chong, Curator of the Isabella Stewart Gardner Museum, and did not know the name of the gallery’s director, Otto Gutekunst, who supplied so many of these masterpieces. Dr Chong explores this paradox, drawing upon published and unpublished letters and re-examining the evidence of the accounts lodged at Colnaghi and in the Museum’s archives. Ruthless in business and single-minded in his pursuit of art, Henry Clay Frick built one of the greatest private art collections of the early 20th century, now enshrined in the museum in New York which bears his name. Cynthia Saltzman re-examines the key role played in the formation of this collection by Colnaghi, who supplied such masterpieces as Titian’s Portrait of Aretino and the “Ilchester” Self-Portrait by Rembrandt. Drawing upon the correspondence between Otto Gutekunst and “Charlie” Carstairs of Knoedler as well as unpublished material in the Knoedler, Colnaghi and Frick archives, Saltzman paints a vivid picture of the international art market in the years leading up to the First World War. Chapter 6: COLNAGHI AND THE HERMITAGE DEAL

The years around 1930, in the aftermath of the Wall Street Crash, witnessed one of the most remarkable sales in art history when the cash-strapped Russian government secretly decided to sell off some of the greatest masterpieces in the Hermitage collection. These included such works as Van Eyck’s The Annunciation, Raphael’s St George and the Dragon and Botticelli’s Adoration of the Magi. Many of these paintings found their way to America, sold through Colnaghi and their partners Knoedler and Matthiesen to Andrew Mellon, where they laid the foundations for the National Gallery of Art in Washington. Drawing upon new evidence from the diaries of his father N.M. Ekserdjian, who worked for Calouste Gulbenkian from 1949 to 1955, Professor David Ekserdjian unravels some of the remaining conundrums surrounding one of the landmark sales in art history and Colnaghi’s hitherto underappreciated role in ‘one of those never again moments’.

Sir Christopher White’s warm and witty tribute to James Byam Shaw, the director of Colnaghi who did so much to establish the gallery’s pre-eminence in Old Master drawings, is a personal memoir based on the period, during the 1960s, when the future director of the Ashmolean Museum worked under Byam Shaw and was able to observe at first hand his remarkable connoisseurship. During the Byam Shaw era, Colnaghi came closest to being “…a museum where everything happened to be for sale” and “JBS” played a key role in improving relations between museums and the art trade, cataloguing the Christchurch Picture Gallery collection, selling major drawings to the British Museum and Ashmolean Museum and helping to build the great private collection of Count Antoine Seilern, now part of The Courtauld Gallery. This included Michelangelo’s astonishing Dream of Human Life, the subject of an exhibition at The Courtauld Gallery in 2010. Despite his academic approach, Byam Shaw loved the thrill of buying an undiscovered masterpiece at auction, such as the great Brueghel drawing The Calumny of Apelles now in the British Museum. Jeremy Howard, writing the later history of the firm, shares the memories of John Baskett, Luca Baroni, Michael Goedhuis, Nicholas Hall, Richard Kingzett, Richard Knight, Katharina Mayer-Horton, Patrick Matthiesen and many others. After a very difficult period during the Second World War, Colnaghi’s fortunes recovered in the 1950s and 1960s, decades particularly remarkable for the sales of prints and drawings including some very rare prints from the Liechtenstein Collection. Colnaghi also started to move into new areas, establishing a position as market leader in Italian Baroque painting. In 1970 the firm was bought by the Hon. Jacob (later Lord) Rothschild, who initiated a programme of modernization and expansion which was continued in the 1980s, when ownership passed to the Oetker Group. In 1983 Colnaghi opened a gallery in New York, establishing a bridgehead which led to important sales to American museums and private collectors. This was followed in 1992 by the opening of a gallery in Paris in the rue St Honoré near the site of Torre’s original shop where the business started in the 18th century. The downturn of the art market in the mid 1990s meant that Colnaghi had to close the Paris and New York galleries and in 2001 the business was sold to Konrad Bernheimer, the successful Munich-based art dealer, who was soon joined by Katrin Bellinger, now co-owner and director of the Drawings Department.

Chapter 9: A CONTINUING STORY: TRADITION AND INNOVATION, COLNAGHI SINCE 2002

Since 2002 Colnaghi has consolidated its position in London, expanded its European client base, and widened its participation in international art fairs through the partnership with Bernheimer Fine Old Master Paintings and Bellinger Kunsthandel in Munich. In this chapter Jeremy Howard surveys developments during the last eight years and talks to Konrad Bernheimer and Katrin Bellinger about the ways in which they have maintained Colnaghi’s traditions while adjusting to the current market and making plans for the future. 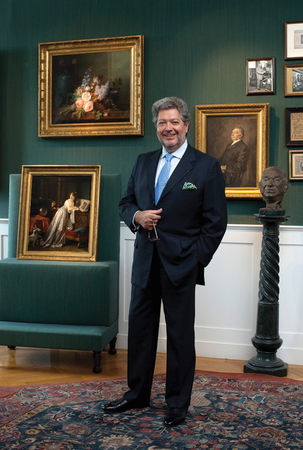 The Gallery Today. Installation view of the exhibition In the Company of Old Masters, October to November 2005 The Gallery Today. Installation view of the exhibition In Italian Light, June to July 2007 The Gallery Today. The Library