"Art That Was Once Alive" in New York Yimes

"Art That Was Once Alive" in New York Yimes 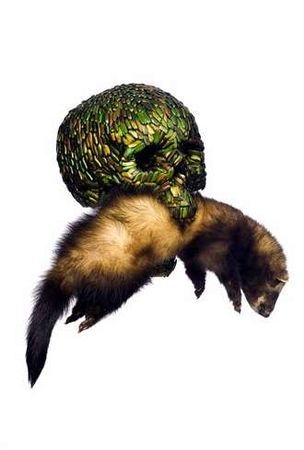 “My sculptures from 2001 represent human skulls that seem to have been invaded by scarabs. I was attracted to the beetle’s shimmering colors which bestow a distinctive beauty to the skulls making them reminiscent of Aztec skulls set with precious stones. The fact that scarabs are symbols of eternity in the Egyptian mythology adds another layer of meaning, transforming the skull into an object of veneration.” — Jan Fabre “My work is usually interactive and kinetic in nature. I strive to make pieces in which the viewer’s experience is important to the form and function of the piece. I want people to remember themselves, in much the same way that babies discover their fingers.” — Billie Grace Lynn “Blending traditional glassmaking with new media technology gives me the framework in which I fit my artistic narrative. Revelation — in some cases self-revelation — is the underlying theme of my electronic and static reliquaries.” — Tim Tate

“The bottles in my distilled life series encapsulate, preserve, and protect the ideas contained within.” — Marc Petrovic “Most of my recent pieces are made with insect parts in a process where I transform these repulsive creatures into other anatomies. I re-contextualize these organic elements into significant objects that address existential matters.” — Fabián Peña “Are chickens from the supermarket less important than a bird gone forever except in a museum? Although observed from actual bird prototypes, these sculptures embody absurdity, as they are a creation of human hands. Reflecting the preposterous notion that humans can put things back together, they imply that merely by good intentions, nature could be retrofitted for the better, placating our guilt.” — Christy Rupp “Funeral etiquette from the latter half of the Victorian era dictated that widows wear black veils for a mourning period of eighteen months. I have adapted this tradition for Cauda Equina, which translates as ‘horse tail’ but is also the name given to the lower part of he spinal column in most vertebrates.” — Keith W. Bentley 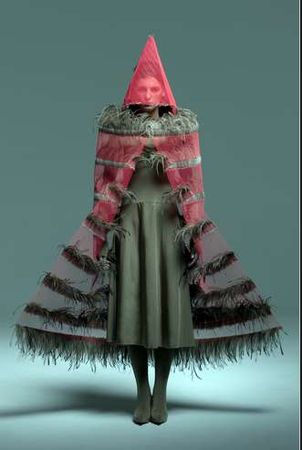 “It was my intention to re-create and to re-present the Australian landscape by using an indigenous material. The texture and color of emu feathers have evolved over millions of years to look and move exactly like the scrub in the Australian bush. When worn, the cloak’s feathers bounce and move like grasses in the wind.” — Maria Fernanda Cardoso “The images that I make often consist of unlogical combinations of materials, patterns, colors, and forms, with my head as the only constant factor. Each element is conspicuously chosen to affect a predetermined transformation. By playing with the value of each material and by using them for a purpose that was not originally intended for them, I construct within the image, in a very small way, a different perspective on the world.” — Levi van Veluw “I like to synthesize materials that resist being synthesized. By drawing attention to the duality of the materials, I intend to transform them into something altogether different and new. I think of it as a kind of alchemy.” — Marc Swanson “People are fabricating an artificial world according to personal interests. The biological world is no exception; the most mysterious place of the future world will be the “biological factory.” In this place, people will use their adept skills and methods to produce DNA and nurture new biological species, and these creatures would either be manufactured or implanted.” — Shen Shaomin

Commentaires sur "Art That Was Once Alive" in New York Yimes