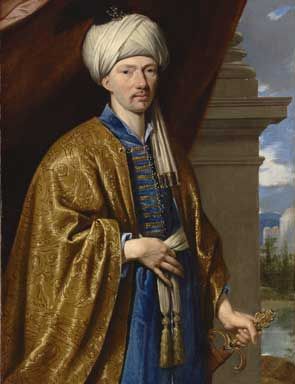 SAN MARINO, CA.- The Huntington Library, Art Collections, and Botanical Gardens has added to its holdings a newly identified painting by prominent 17th-century French painter Philippe de Champaigne (1602–1674). Selected for acquisition by The Huntington’s Art Collectors’ Council at its spring meeting, Portrait of Jean de Thévenot (1633–1667), painted between 1660 and 1663, had been misattributed to Dutch artist Gerbrand van den Eeckhout (1621–1674), but with the discovery in 1990 of a related painting in a private collection, it was established as a remarkable addition to Champaigne’s body of work. This year, with a comparison to an engraved portrait in a journal written by Orientalist and traveler Thévenot, the identity of the sitter was determined. The sitter was previously identified as French linguist and archeologist Antoine Galland (1646 –1715), to whom the picture, however, bears little resemblance.

Portrait of Jean de Thévenot goes on view today in the Huntington Art Gallery, providing an art historical bridge between works of 16th- and 18th-century European art. It will be a centerpiece in the gallery of 17th-century art to be reinstalled sometime next year. In the meantime, it will be on display in the upstairs gallery of Renaissance paintings and bronzes. It is a superb and visually captivating example of the work of one of France’s most important Baroque painters. Moreover, the identity of the sitter, a man of letters and science, resonates with other aspects of The Huntington and its mission.

“This painting is not only a superb example of an important artist’s distinctive style, it is a discovery, and as such is important for reasons of artistic and historical scholarship,” said John Murdoch, Hannah and Russel Kully Director of the Huntington Art Collections. “Furthermore, the representation of a man who was a botanist and scientist as well as a traveler and linguist is particularly apt for The Huntington, with its renowned botanical gardens and rich holdings of material on the history of science.”

The painting’s attribution to Champaigne resulted from the discovery of a painting in a French private collection of the same subject and composition. It was not unusual for the artist to make two copies of the same painting, with variations in size or composition. The subject was identified while it was in London by the striking resemblance of the sitter to the engraved portrait that serves as frontispiece to de Thévenot’s journal, which was written during his travels to the Middle East and published in 1664 as Relation d’un voyage fait au Levant. The Huntington Library owns an early English translation of this volume.

Measuring 23 ½ by 17 inches, Portrait of Jean de Thévenot depicts the subject in sumptuous Turkish costume, wearing a tasseled silk turban and sash and a cloak of gold threaded brocade. Thévenot wrote extensively about his journeys to Turkey and elsewhere and was a gifted linguist, natural scientist, and botanist. He stands before a large swath of drapery that partially conceals a pillar surmounted by a column with his left hand resting on the finely ornamented and jeweled hilt of a sword. This theatrical presentation creates a dramatic shift between the subject and the dreamy pink- and blue-hued structure in the distance. Composed of domes, the structure brings to mind Turkish architectural monuments of the 16th century such as the Sultanáhmet Mosque in Istanbul. Champaigne took obvious pleasure in rendering the lavish fabrics and almost translucent complexion of the striking and exotic figure.

“The intense observation of material detail—such as the veined and pinkish coloration of flesh and the textures of fabrics—recall Champaigne’s Flemish training, and the majestic solemnity brings to mind the classicism of Nicolas Poussin, with whom he collaborated,” said Catherine Hess, chief curator of European art at The Huntington. “However, in this case, Champaigne uses his own gravity and penetrating naturalism to depict a remarkably vivid, striking, and unusual subject.”

Philippe de Champaigne was a successful painter of religious subjects and the greatest portraitist of his time in France. After training in his native Flanders, Champaigne traveled to Paris in 1621 where he met the young Poussin (1594–1665), whose rational classicism was to have great impact on his style. Champaigne collaborated with Poussin on decoration for Marie de Medici’s Luxembourg Palace in Paris, and by 1627 he became the Queen Mother’s official painter. He gained the favor of King Louis XIII and of the king’s chief minister, Cardinal Richelieu, for whom he painted numerous portraits. In his last years he reserved his efforts for portraits of his family and friends as well as for religious subjects. Portrait of Jean de Thévenot is one of these late works.