Once in a Lifetime Jade Collection Sells for £2.3M at Bonhams Fine Chinese Art Sale Which Totalled £6.6M in London

Once in a Lifetime Jade Collection Sells for £2.3M at Bonhams Fine Chinese Art Sale Which Totalled £6.6M in London

A breathtaking collection of jades sold as part of Bonhams Fine Chinese Art Sale on May 13 in New Bond Street achieved astronomic prices in a frenzy of bidding. The 35 jades made £2.3m in a sale total of £6.6m with 94% by value.

Colin Sheaf, International Head of Asian Art at Bonhams, and the sale's auctioneer, said after the sale: "It is very unusual to have such a large jade collection of the highest quality all at one time for sale. These are pieces which are comparable or identical to pieces that are housed in the Palace museum Beijing. They represent a once in a lifetime opportunity for jade enthusiasts to buy the very best of their kind, hence the excitement and enthusiasm we saw in the auction room today." 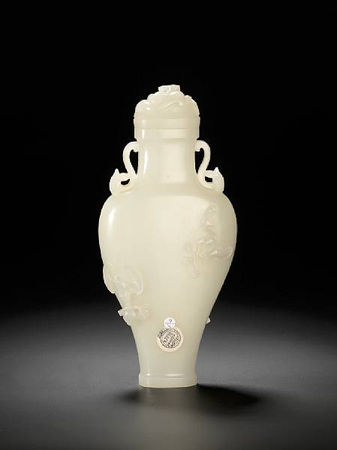 The even almost flawless stone superbly hollowed in the form of a flattened baluster vase rising from a recessed foot to broad shoulders, carved around the body in high relief with five bats in flight, the three on the principal side each suspending ribboned auspicious emblems from their mouths, the endless knot, a pair of fish, and a ruyi sceptre, the two on the reverse similarly clasping fruiting sprigs, the tall neck set to either side with lingzhi handles, the domed cover surmounted by a chilong finial. 21.3cm (8¼in) high (2).

Compare a white jade baluster vase, dated to the Qianlong period, carved in low relief with a single bat grasping a chime stone and twin fish from its mouth, illustrated by Yang Boda ed. Romance with Jade from the De An Tang Collection, Hong Kong, 2004, fig.57. The magpie superbly carved seated on its legs, looking forward and holding in its beak a gnarled lingzhi fungus sprig embellished with jadeite, garnet and rose quartz stones, the tail held high and the wing feathers well detailed, the stone of white tone with a small russet inclusion at the back, wood stand. 14.5cm wide (3).

Footnote: Compare a similar pair of white and russet jade magpie-shaped boxes and covers inlaid with stones, from the Qing Court Collection, illustrated in The Complete Collection of Treasures of the Palace Museum: Jadeware (III), Hong Kong, 1995, pl.183. The reclining doe superbly carved with its head held high and turned slightly to the right, its ears pricked and legs tightly tucked beneath its body, clasping a leafy sprig of lingzhi fungus in its mouth, the body finely incised to naturalistically depict the fur and radial markings, the stone of a white tone with minor white inclusions and russet streaks, wood stand. 10.9cm (4¼in) wide. (2).

Provenance: purchased from John Sparks Ltd., London on 6 October 1952 for £70
The Property of a Lady and thence by descent The group well carved in the form of a recumbent hound supporting an archaistic flattened vase and cover with recessed finial on its back, flanked at its side by a further small hound reclining on its back and supporting a bird on its back, the stone of a pale yellowish-green tone with russet-brown splashes and an attractive high polish, inlaid wood stand. 13.7cm (5¼in) wide (3).

This rare mythical beast bears relation to a small (5cm long) white jade carving of a ram-like animal holding a spray of lingzhi fungus in its mouth, illustrated in Chinese Jade Animals, Hong Kong, 1996, Catalogue no.168. The form of the current beast, with its rotund haunches and short pricked ears is also comparable to an 18th century white and russet jade carving of a doe formerly in the Gerald Godfrey Collection, sold at Christie's Hong Kong, 30 October 1995, lot 892, where it is attributed to the Suzhou workshops.

Footnote: Yellow jade was highly prized throughout the Qing Dynasty and was greatly treasured by the Qianlong Emperor in particular.

Whilst no other vase group of this exact design appears to be published, yellow jade was clearly a popular choice for archaistic vase groups of related forms. Compare a related yellow jade twin vase with three rams and other mythical animals, Qianlong seal mark and period, from the Qing Court Collection, illustrated in The Complete Collection of Treasures of the Palace Museum: Jadeware (II), Beijing, 2008, pl.20. See also a jade phoenix and vase group dated to the Qianlong period, sold at Sotheby's Hong Kong, 11 April 2008, lot 3094. Another dragon and phoenix vase group dated to the 18th century was sold at Christie's Hong Kong, 27 October 2003, lot 828.

For a similar subject matter, see a jade dog and bird group from the Qing Court Collection, illustrated in The Complete Collection of Treasures of the Palace Museum: Jadeware (II), Beijing, 2008, pl.143.

The skillful use of the russet-brown patches against the yellow jade is comparable to the splendid Qianlong mark and period double carp vase from the Palmer collection, exhibited in the Victoria and Albert Museum, London in 1975 and sold at Bonhams London, from the Palmer Collection, 11 June 2003, lot 29. 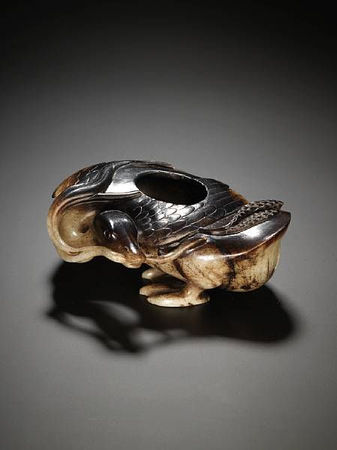 The unusual waterpot carved as a duck standing on its webbed feet, with its head turned towards the left holding a millet sprig in its beak, with the wings spread over the body around the oval opening, the stone of grey-green tone with brown inclusions with the upper section and wings turning into dark brown. 16.6cm (6½in) wide.

Footnote: The superb craftsmanship of the carver is demonstrated in the overall design, use of the stone's colours and careful balancing of the large receptacle on the two webbed feet. Compare a related pale green jade duck vessel, similarly balanced on its feet, from the Qing Court Collection, illustrated in The Complete Collection of Treasures of the Palace Museum: Jadeware (II), Beijing, 2008, pl.204.

Commentaires sur Once in a Lifetime Jade Collection Sells for £2.3M at Bonhams Fine Chinese Art Sale Which Totalled £6.6M in London