With little if any nitrogen, Type IIa diamonds represent less than 2 of all gem diamonds. Their exceptional transparency and near perfect crystalline structure is often compared to the one of running water. With the best colour and clarity, a carat weight of 40.21 carats, an excellent polish and symmetry and a type IIa structure, the present ring has the ideal combination that makes it a truly magnificent and rare jewel. 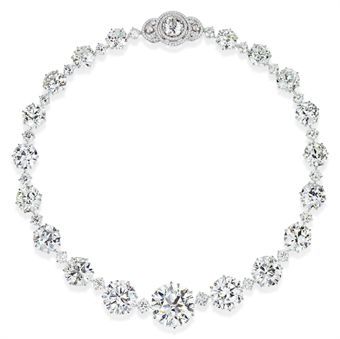 Notes: Amongst the jewellery classics, the diamond rivière is certainly the most sought after. Cherished by Royal and Noble families of the world, a beautiful diamond rivière is an absolute necessity for any respectable jewellery casket. Whether it is composed of collet-set old-cut diamonds or almost invisible claw-set brilliant-cut diamonds, it is the purest example of what a jewel of style can be. Already in fashion at the turn of the 19th century, the rivière has evolved along with the skills of the diamond cutters, inspiring the best jewellers to gradually reduce the amount of metal in the setting in order to enhance the innate sparkle of the diamonds.
The careful choice of matching diamonds, the subtlety of the graduation and the lightness of the setting are all of equal importance in the beauty and success of the piece. Needless to say that the total diamond weight adds to the brightness of the necklace, and that any diamond rivière above 150 carats is extremely rare.
Some of the important rivières offered at auction by Christie's include: An Exquisite Belle Epoque Diamond Rivière Necklace set with 30 diamonds weighing approximately 80 carats, that fetched HK$15'780'000 (US$2'035'620) in December 2008 in Hong Kong; Her Majesty Queen Mary's Diamond Rivière, weighing approximately 80 carats, sold for 993'600 (US$1'828'224) in June 2006 in London, Property from the Collection of H.R.H the Princess Margaret, Countess of Snowdon and lastly A Magnificent Diamond Necklace, the largest diamond weighing 24.04 carats, composed of 17 circular-cut diamonds totaling 133.46 carats, signed Cartier, sold in Geneva for Sfr 2'530'000 (US$1'796'300) in November 1992.
Christie's is honoured to offer one of the most important diamond rivière ever to appear at auction; the 20 brilliant-cut diamonds weighing a total of 155.17 carats. The spectacular combination of sparkle and style carries the promise of an unrivalled adornment, mixing tradition and modernity, as well as elegance and boldness. Accompanied by report no. 1112722081 dated 19 February 2010 from the GIA Gemological Institute of America stating that the diamond is D colour and Internally Flawless clarity, with Excellent polish and Excellent symmetry Accompanied by report no. 2115520139 dated 1 February 2010 from the GIA Gemological Institute of America stating that the diamond is G color and VVS1 clarity Accompanied by report no. 5111226404 dated 5 October 2009 from the GIA Gemological Institute of America stating that the diamond is D colour and Internally Flawless clarity, with Excellent polish and Excellent symmetry In February 2009, Forevermark debuted its Precious Collection, inviting acclaimed jewellery designers to create the finest pieces. The choice of Shaun Leane was no surprise. Awarded UK Jewellery Designer of the Year in 2004, 2005 and 2009, UK Luxury Designer of the Year in 2006, Shaun Leane is internationally celebrated for pushing the boundaries of jewellery design. Alongside his collections and bespoke pieces, Leane is responsible for creating some of the most iconic catwalk pieces we have seen today, including collaborations with Alexander Mc Queen, Marc Jacobs and Givenchy.

Invited by Forevermark to be inspired by 'Precious', Shaun Leane drew on the magical quote "The sun and moon shed one white light" from Loves First Ever to Her Plague by the legendary Welsh poet Dylan Thomas, and created the 'White Light'. As Leane says, 'White Light' encapsulates "The first snow of winter (which) falls reducing everything to zero, man eclipsed by a quiet cover of pure white. Snow crystals settled on leaves, an ethereal light so pure and still that it cuts to the essence of what is natural, pure and precious. Only the brilliant purity of the most precious natural diamonds can equal that luminous wonder."

Shaun Leane worked in collaboration with Steinmetz Diamonds to craft 'White Light' and has selected the purest beautifully cut pear-shaped D colour, Internally Flawless diamonds. Known for their leadership in rare and exceptional diamonds as well as for the creation of unique high-end jewellery, Steinmetz has crafted some of the world's finest diamonds, including the 203 carats Millenium Star, the 59 carats Steinmetz Pink as well as the Ponahalo diamonds, the two largest Forevermark diamonds in the world, weighing 102.11 and 70.87 carats, sold at Christies New York, in October 2008.

Forevermark is all about the art of selection. Selected for their exceptional qualities; less than one percent of the worlds diamonds are eligible to bear the Forevermark inscription, a unique identification number and symbol invisible to the naked eye. The inscription provides a promise from the worlds leading diamond company, the De Beers Group, that each diamond has been set apart and specially-cared for by experts at every step of its journey. Each diamond is individually inspected to ensure it meets the marks criteria and each stone is cut and polished by master craftsman before its inscription.

Designed by Shaun Leane, crafted by Steinmetz Diamonds, part of the Forevermark Precious Collection, the 'White Light' is a unique piece in the history of diamond jewellery.