Francesco Albotto (Venice 1721-1757) Venice, A View of the Molo from the Bacino di San Marco, with the Piazzetta and the Palazzo Ducale. photo Sotheby's

PROVENANCE: Lord Clifden;
With Koetser Galleries, London, until 1951;
By whom sold to the present owners and thence by descent in the family.

LITERATURE AND REFERENCES: A. Graves, Art sales from early in the eighteenth century to early in the twentieth century : (mostly old master and early English pictures), London 1918-21, vol. II, p. 201 (as by Michele Marieschi).

NOTE: This wonderfully preserved work is by Michele Marieschi's only known pupil, and the greatest imitator of his style, Francesco Albotto. When Marieschi died in 1743 at the age of thirty-two, Albotto literally stepped into his master's shoes: he inherited his workshop in the San Luca district and even married Marieschi's widow Angela Fontana in October of the following year. The extremely close stylistic relationship between the artists has inevitably led to recent debate as to the correct authorship of the present picture. Ralph Toledano, in private correspondence dated 27 April 2010, fully attributes the work to Micehele Marieschi based on photographs, and in fact this picture was sold by David Koetser in 1951 as by Marieschi. Only recently, have others suggested that it may in fact be a work from the hand of Albotto.

Based on stylistic evidence, this painting appears to date to a relatively early phase in Albotto's artistic career, at a time when his stye was close to that of Marieschi, not only in his choice of composition but also in his painting technique. The view is taken from the Bacino di San Marco and follows a similar viewpoint adopted by Marieschi for a number of his own paintings. Albotto's own painted replicas, in which the staffage differs every time, all demonstrate the artist's ability to emulate Marieschi's painting technique, particularly in the depiction of water and of the wall surface of the Palazza Ducale.2 When talking about Marieschi in his Abecedario, Pierre-Jean Mariette (1694-1774) remarked that Albotto liked to be called 'the second Marieschi', suggesting that he actively sought to promote his position as Marieschi's successor.3 Indeed Albotto must have enjoyed his temporary position as the principal vedutista in Venice during the later 1740s and '50s, helped in great part by Marieschi's untimely death and Canaletto's departure for England in 1746. It is quite possible that if Albotto himself had not died prematurely at the age of thirty-five, his reputation might have been more long-lasting. By the sixth decade of the 18th century, Albotto was certainly operating as an independent artist, for between 1750 and 1756 an artist called Francesco Alboro - almost certainly to be identified with Francesco Albotto - is recorded in the Fraglia (the list of Venetian painters registered at the Accademia).4 NOTE: Throughout history, Venice has been plagued by high waters. The present painting depicts such an event. Here, the water has risen to a level so high that gondolas can easily float through the Piazza. Rather than finding these events annoying they were, in fact, a source of amusement for local Venetians. Boats and gondolas were even decorated with sollazzieri or types of decorative festoons as they were punted around the Piazza.

There were several acque alte during the early 19th century and clues in the present composition help the dating of this representation. The presence of the Byzantine horses that stand sentinel atop San Marco (removed by Napoleon in 1797, installed in the Carousel, Paris and finally returned to Venice by royal decree from Emperor Francis I of Austria) provide us with a terminus post quem of 1815. The Austrian flags that fly above the Piazza indicate that Venice was still under Austrian rule and provide a terminus ante quem of 1849 (the year the Austrians were expelled from Venice). However, other clues allow us a more precise dating of the event. The buildings at the left of the basilica are most telling. These were pulled down in January 1836 to erect the Palazzo Patriarcale. Therefore, there are enough elements to suggest that this event was the acqua alta of December 9, 1825. This flood was recorded in the Gazzetta Privilegiata di Venezia as having exceptionally high waters and was engraved by A. Lazzari.

When last sold in 2003, Charles Beddington first suggested the attribution to Chilone. Dr. Lina Urban confirmed this attribution and furthermore, identified the composition as the flood of December 9, 1825. 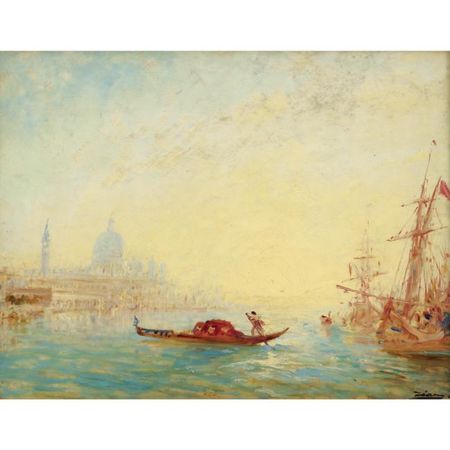 The present work will be included in the third volume of Anne Burdin-Hellebranth's Félix Ziem catalogue raisonné currently being prepared by Mathias Ary Jan.

PROVENANCE: Acquired by the grandmother of the present owner, 1920s
Then by descent in the family