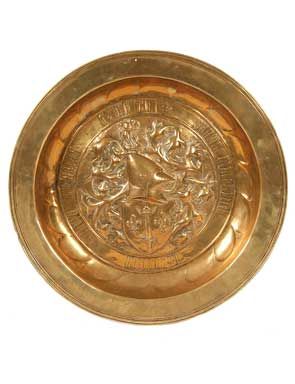 A brass alms dish decorated with the arms of Joan of Arc. Photo: Bonhams.

The dish commemorates Joan of Arc’s victory at Orleans in the Hundred Years’ War in 1429, which resulted in the coronation of Charles VII. It is inscribed with 18th century French text: ‘In 1429, after the relief of Orleans, King Charles VII, who was staying at Chinon, bestowed on Joan of Arc the coat of arms, which the model shows opposite, to decorate her standard and herself.’

Joan of Arc has remained an important figure in Western culture and the story of her life has inspired works by composers and writers including Verdi, Tchaikovsky, Shakespeare and George Bernard Shaw. The great American writer Mark Twain described Joan as ‘perhaps the only entirely unselfish person whose name has a place in profane history,’ while Sir Winston Churchill wrote that ‘Joan was a being so uplifted from the ordinary run of mankind that she finds no equal in a thousand years.’ 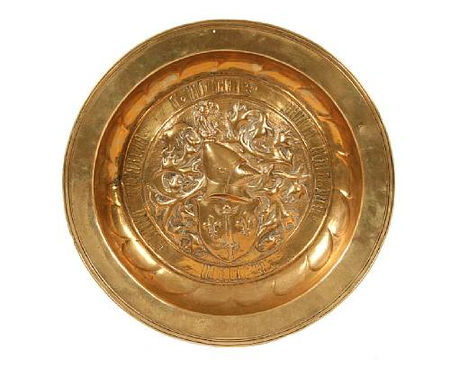 A brass alms dish decorated with the arms of Joan of Arc and inscribed 1429, probably early 15th century. photo Bonhams

Footnote: This interesting alms dish commemorates Joan of Arc's victory in the Hundred Years War. In 1429 she was instrumental in rousing the flagging troops to victory to break the siege of Orléans, resulting in the coronation of Charles VII at Reims that year.

A brass alms dish decorated with the arms of Joan of Arc and inscribed 1429, probably early 15th century (detail of the reverse). photo Bonhams