The lower section on lobed hexagonal bulbous foot, rising towards a globular body moulded with animal-mask handles and six spouts, painted all-over with shaped panels including flowers on a blue ground, the shoulder reserved with a band of ruyi, surmounted by a tall tapering cover surrounded by another six spouts, painted with fish and further shaped panels of flowers, chips and frits, restoration to tip; 47.5 cm. high - Estimate €10,000 - €15,000

Provenance: From a private collection.

Notes: A pair of tulipières of similar shape but applied with dragon-handles and different decoration is illustrated in Dave and Robert Aronson, Dutch Delftware- The Dr. Günther Grethe Collection, Amsterdam, 2004, pp. 76-77. Of oblong cartouche shape, painted in blue and green enamels with a view of a pavillion and the garden, within a Chinoiserie band at the shaped rim, modelled with ornament for hanging, frits, infills; 23 x 25 cm.- Estimate €1,000 - €1,500 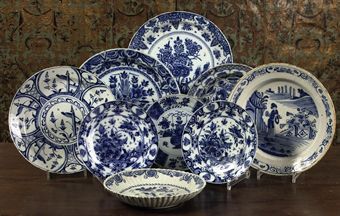 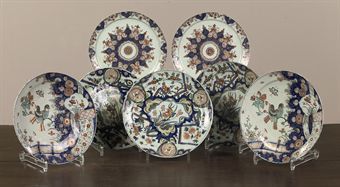