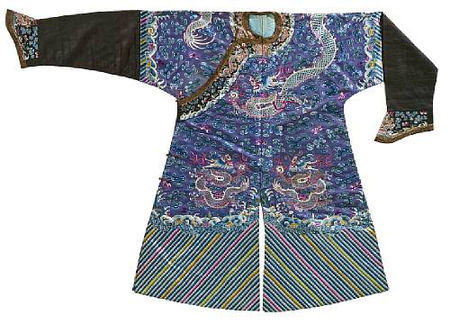 A fine and rare blue ground embroidered dragon robe for a civil official on the Board of State Music. Guangxu, Late 19th Century. photo Bonhams

The brilliant blue satin gound embroidered with a single four-clawed dragon that envelopes the front, back and shoulders above four other four-clawed dragons surrounded by cloud scrolls and bats above a lishui border, the details including gilt-wrapped couched threads and brilliant purple threads combined with shades of blue, white and yellow; the inside right satin flap as well as the lining to the flap stamped with the ten-character seal of the Board of State Music reading Yue du he sheng shu yue qi ku chuo ji (Department of State Music, seal of the Musical Instruments Warehouse). 52 1/4in (132.5cm) long - Sold for $51,850

Footnote: For a practically identical robe with the same seal in the collection of Linda Wrigglesworth, identified for use by a seventh to ninth rank civil official, see G. Dickinson and L. Wrigglesworth, Imperial Wardrobe (Berkeley and Hong Kong, 2000), pp. 165 and 167. The Wrigglesworth robe was also offered and discussed in Christie's New York sale, The Imperial Wardrobe, 19 March 2008, lot 35. The fine, gilt-wrapped threads forming a rich contrast to the brightly colored threads used for the dragons, clouds, auspicious symbols and wide lishui border with some details added in colored wash and ink outline. 57in (145cm) long. Sold for $19,520 The dragons woven in fine gilt-wrapped threads while white, purple and subtly colored thread, combined with some painted details, define the cloud scrolls, auspicious symbols and wide border. 56in (142cm) long - Sold for $10,980 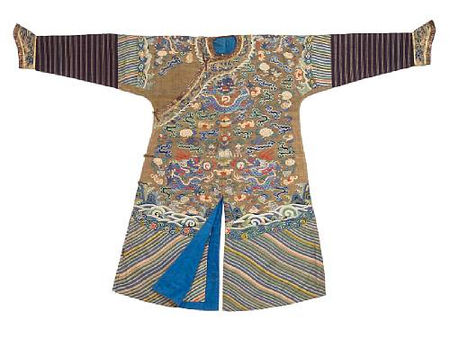 The altered garment displaying seven complete dragons and the bodies of two dragons to the front and back of the collar amid clouds and auspicious symbols woven in white, shades of blue and brighter color highlights against the rich purple ground with some outlines in gilt-wrapped threads. 53in (134.5cm) long - Sold for $3,050 The faded brown ground intricately woven with the traditional motifs in a combination of fine gilt-wrapped threads, black, rust and brown silk threads with the collar band woven en suite on a black ground, the replacement lower sleeves and embroidered cuffs of dark blue-black silk. 51in (129.5cm) long - Sold for $2,745 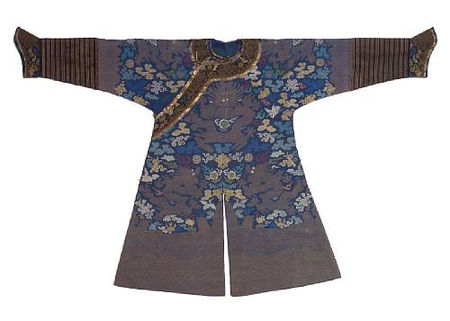 The dragons and lishui border woven with gilt wrapped threads, the other decoration worked in white and subtly colored silk threads, the neck bands and cuffs woven en suite on a black ground. 52in (132cm) long - Sold for $1,220 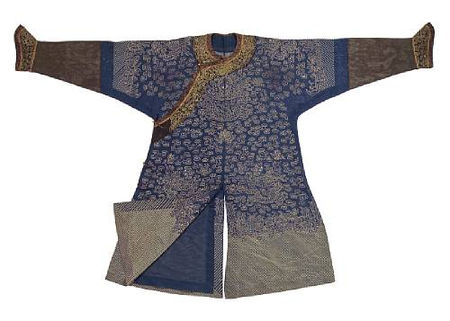 The decoration achieved in white counted stitch except for the eyes of the dragons worked in blue and black threads, the neck bands and cuffs embroidered en suite in pale yellow threads on a black gauze ground. 54 1/2in (138.5cm) long - Estimate: $1,500 - 2,000 Unsold

The principal motifs of dragons, clouds and auspicious emblems woven in bright threads and highlighted with colored pigments against a ground of buff colored threads that show remains of gold and silver leaf wrapping. 53in (134.5cm) long - Sold for $10,370 The black ground woven to both sides with birds, dragons and lishui borders, the dragons woven in metallic wrapped threads and many of the details throughout painted in polychrome or ink washes. 37in (94cm) long - Sold for $3,965