LONDON.- Sales of important private collections have always been the lifeblood of the art market, returning long-hidden material into circulation and also serving as a fascinating permanent record of the taste and eye of an individual collector. In the Old Master field at least, such sales are rather less frequent now than in previous generations, so they are ever more eagerly awaited by private and institutional buyers alike. Formerly owned, in many cases, by leading collectors of the 18th and 19th centuries, several drawings in this exceptional and very personal collection also featured in great sales of the past – including the famous Chatsworth and Holkham Hall auctions.

Assembled with great care and discrimination over a quarter of a century, this excellent collection consists primarily of Italian drawings from the 16th-18th centuries. One of the early highlights is the superb study of a standing female figure by Parmigianino (est. £120,000-180,000), made in 1531-9 in connection with the artist’s most famous scheme of painted decorations, the vault of the Parma church of Santa Maria della Steccata. A definitive example of Parmigianino’s powerful and elegant figure drawings, the sheet was for some two centuries in the illustrious collection of the Earls of Leicester at Holkham Hall. In the annals of celebrated Old Master Drawings sales, the 1992 Holkham sale – when this Parmigianino was last on the market – is second only to the legendary Chatsworth sales of the 1980s, which featured another drawing in the collection: the splendid The Hosts of Pharaoh Destroyed in the Red Sea (est: £40,000-60,000) by the outstanding, and very rare, German master, Hans Rottenhammer, executed in around 1600, when the artist was working in Venice. Of the earlier Italian drawings, another that stands out in terms of quality and visual originality is a major figure study by Paolo Veronese (est. £30,000-40,000), in which the artist uses the blank surface of his fine, blue paper in an astonishingly modern way to help construct his figure. Perhaps the greatest strength of the collection lies, however, in the baroque period. There are magnificent sheets by artists such as Guercino and Salvator Rosa, and an unparalleled group of works by Baldassare Franceschini, called Volterrano (notably his intense Self-portrait, est. £40,000-60,000, illustrated left, and his shimmering Rest on The Flight into Egypt, est. £30,000-40,000), which together show that this relatively little known artist was actually one of the leading draughtsmen of his day. Arguably the two finest drawings of this period in the collection are, however, Pier Francesco Mola’s Venus Rescuing Aeneas (est. £60,000-80,000), and the Study of the Head of a Youth by Pietro da Cortona (est. £35,000-45,000). Combining pen and ink and red chalk in a bravura demonstration of the draughtsman’s art, Mola’s drawing must have been made as a study for a painting dating from the late 1650s, but no connected painting is known today. The immensely sensitive red chalk study by Cortona has all the appearance of a very personal portrait, but in fact served as a preparatory study for the head of the allegorical figure of Genius, who is shown leading Science forward in one of the artist’s highly important frescoed ceilings, painted between 1632 & 1637 in the Palazzo Barberini, Rome. One of the greatest of all the drawings in the collection is, however, a rather later work: Gaetano Gandolfi’s stunning 1786 portrait of his six-year-old son Emidio, attired in a fanciful exotic costume (est. £80,000-120,000). Executed with total bravura in a brilliantly handled combinatin of red and black chalks, this remarkable drawing is both a dashing, romantic image and a deeply intimate portrait of a much-loved child. Gandolfi made a number of similar drawings of his children, but almost all of the most important examples are in museum collections, and this is by far the most beautiful drawing from the series to come on the market in recent times. 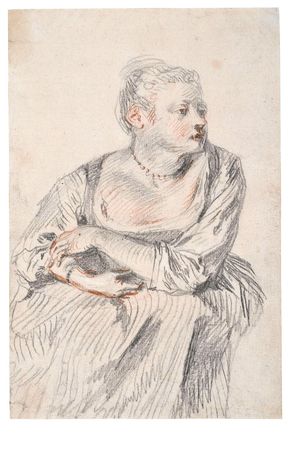 In addition to the superb selection of Italian drawings, the collection also includes smaller but meticulously chosen groups of French, Dutch and German drawings dating from the 16th to the early 20th centuries. The outstanding French drawing is an exquisite study of a seated woman by Jean-Antoine Watteau (est. £120,000-180,000), made in preparation for the artist’s 1717-19 painting known as Les Bergers, now in the collection at Schloss Charlottenburg, Berlin. The drawing is executed in a combination of media that Watteau used only occasionally, but to striking effect: the majority of the figure is built up with a network of silvery strokes of graphite (a very rare medium in Old Master Drawings), while the accents in the face and hands are in a more typical red chalk, an extremely effective juxtaposition that creates a lively yet utterly elegant figure. Of the Dutch drawings, the most striking is a fine red and black chalk study of the head of an old man, by Adriaen van Ostade (est. £20,000-25,000), which displays an elegance and refinement that might come as a surprise to those who only know Ostade as a painter of ribald and rather crude peasant scenes. This drawing was previously in the collection of the great connoisseur and Harvard University benefactor, Philip Hofer. In his very personal forward to the sale catalogue, the collector who assembled this remarkable group of drawings wrote that he embarked on collecting “with the bold aim of looking over the artist’s shoulder”. There can be no question that he succeeded in this aim. The light that these extremely varied studies shed on the artistic creative process is both intense and wide ranging: we see every moment in the artist’s thought process revealed and illuminated. The richness, variety and sheer quality of the 80 drawings in the collection make this one of the most important drawings sales of recent decades.