The KedsWhitney Collection by Jenny Holzer

The KedsWhitney Collection by Jenny Holzer 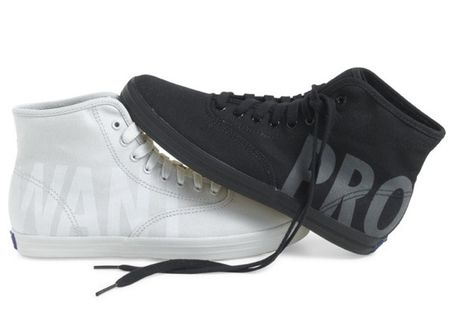 Along with the Whitney Live festivities this summer, the Whitney Museum of American Art and Keds have collaborated to present a new limited-edition product series – the KedsWhitney Collection. The first release in the series features artist Jenny Holzer, whose bold statements of text have been etched and projected across tall buildings and other outdoor objects all over the world. Holzer’s LED signs remain among her most recognizable and influential pieces.

As the first artist to showcase her KedsWhitney Collection sneaker design, Holzer is in favor of making art more accessible. Printed on the canvas reads, “Protect Me From What I Want,” a line from her 1980s “Survival” series. The shoes will be sold exclusively at select Bloomingdale’s as well as bloomingdales.com and keds.com starting July 8, 2010. You’re going to have a hard time choosing among the black, white or gray, high-top ($75) or low-top ($70) versions of these iconic Champion styles. Once you take your pick, all Keds’ profits from Jenny Holzer’s line will benefit the Whitney Museum of American Art, so not only will you be wearing shoes that will undoubtedly turn the heads of passersby, but you will also be supporting the Whitney!