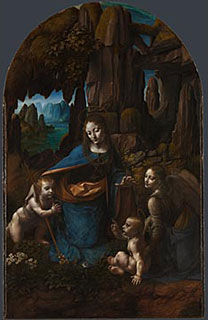 The newly cleaned painting is back on display in Room 2. Photo: Courtesy National Gallery London

LONDON.- Leonardo da Vinci’s Virgin of the Rocks is to go back on display in the National Gallery (afternoon of 14th July) after an 18-month restoration project which started in November 2008.

The decision to restore the painting came after several years of intensive study of Leonardo’s work and that of his Milanese associates and assistants – the so-called leonardeschi – from within the Gallery’s collection. The experience gained from examining these pictures reinforced the view that 'The Virgin of the Rocks' could not be appreciated as originally intended. The cleaning process began because some varnish that was applied in 1948–9 was particularly unstable and prone to yellowing. Fine cracking in that varnish, and atmospheric dirt which had become absorbed in its waxy surface, meant that the ability of the varnish to fully saturate the picture had become seriously compromised. As a result the subtlety of shading and the sense of space were markedly reduced, and the impact of this great work significantly lessened.

The conservation involved removing much of the badly degraded varnish from the painting, though leaving a very thin layer over most of the picture surface. While the cleaning did not effect a dramatic shift of colour, it produced a significant improvement in saturation which has allowed a much greater appreciation of the painting’s full tonal range, especially in the darker areas. This has in turn given a much clearer sense of the unified lighting, three-dimensional modelling and the intended spatial recession through the rocky landscape.

The restoration was undertaken by Larry Keith, the new Director of Conservation, working in collaboration with the picture’s curator, Luke Syson, and the Scientific Department, under the direction of Ashok Roy. There were also discussions and exchanges with colleagues from several other institutions in Europe and America, including the Louvre, which has an extensive Leonardo collection that includes the earlier version of 'The Virgin of the Rocks'.

The conservation and associated technical research has reaffirmed the sense that the picture is not finished in the traditional sense, and instead shows a range of completion from the level of the barely sketched hand of the angel to the fully realised heads of the principal figures. The associated study of materials and techniques has also been an important element of a more comprehensive reappraisal of the picture’s genesis and authorship. In the past, Gallery curators, like many scholars of Renaissance painting elsewhere, have explained the different levels of finish and resolution in the picture by arguing that Leonardo was helped by assistants in realising this second version of the composition; it now seems possible that Leonardo painted all the picture himself, leaving some parts just sketched or yet to be completely resolved, and others (such as the angel’s head) fully worked up.

'The Virgin of the Rocks' will be displayed in a new frame made by Peter Schade, Head of Framing at the Gallery. This incorporates parts – the pilasters and cornice – of a north Italian frame of about 1500, purchased specially in Italy in 2009. Schade has added the missing elements, referring to carved frames executed by Giacomo Del Maino who carved the altarpiece into which 'The Virgin of the Rocks' was originally set. This new frame will therefore evoke the gilded setting of Leonardo’s masterpiece, accentuating its muted colour scheme, the artist’s revolutionary system of shadowing and the elements of his pictorial ‘relief’, already made so much more evident by the restoration. Newly cleaned and framed in this way, the Virgin’s left hand, for example, now seems to project into the viewer’s space.

The restoration process has provided the opportunity for a comprehensive study of 'The Virgin of the Rocks' by the National Gallery’s Scientific, Conservation and Curatorial departments, with the findings being published online in the National Gallery’s Technical Bulletin in September 2011. The Gallery will expand its initial research on Leonardo himself to include the systematic investigation of Leonardo’s Milanese pupils, collaborators and followers. 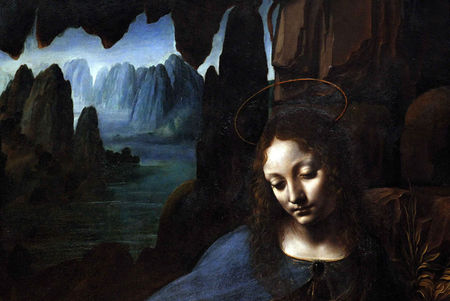 The Virgin Mary is seen from the artwork "The Virgin on the Rocks" by Leonardo da Vinci (1491-1508), at the National Gallery in London July 14, 2010. An 18-month project to restore Leonardo da Vinci's "Virgin of the Rocks" revealed the Renaissance artist likely painted the entire work himself rather than, as previously thought, with the help of his assistants. REUTERS/Suzanne Plunkett. Visitors look at the "The Virgin on the Rocks" by Leonardo da Vinci (1491-1508) at the National Gallery in London July 14, 2010. An 18-month project to restore Leonardo da Vinci's "Virgin of the Rocks" revealed the Renaissance artist likely painted the entire work himself rather than, as previously thought, with the help of his assistants. REUTERS/Suzanne Plunkett.