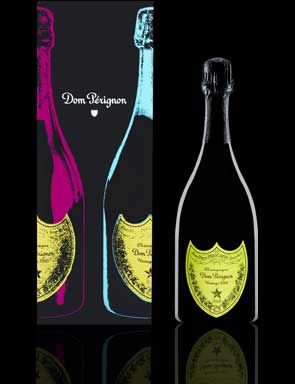 NEW YORK, NY.- With the creation of an exclusive collection of three bottles by the Design Laboratory at Central Saint Martin’s School of Art & Design, Dom Pérignon pays tribute to Andy Warhol, creative genius and one of the most illustrious artists of the 20th century.

Andy Warhol and Dom Pérignon
"Went to the gallery where they were having a little exhibition of the glittery Shoes, and had to do interviews and pics for the German newspaper and then we had to go back to the hotel and be picked up by the “ 2,000” people - it's a club of twenty guys who got together and they’re going to buy 2,000 bottles of Dom Pérignon which they will put in a sealed room until the year 2,000 and then open it up and drink it and so the running joke is who will be around and who won't..."

This is an entry from Andy Warhol’s diary on March 8th, 1981. The pope of Pop Art and a leading figure of the New York underground art scene had just returned from Munich where he had had a show, and was recounting what he had seen. He really loved this story. Not surprising. He once said that he had been to thousands of parties in his life, and in the late 1970s he liked to go to New York’s Studio 54, the wildest and most theatrical club of the period (along with Le Palace in Paris), with his friends and drink Dom Pérignon.

A Tribute to Andy Warhol by Dom Pérignon
Inspired by Warhol’s unconventional representation of icons, and the playful use of codes and colour in his work, Dom Pérignon commissioned the Design Laboratory at Central Saint Martin ’s School of Art & Design to reinterpret its timeless bottle. The result is a unique collection of three bottles, each with its distinct label in red, blue or yellow, paying homage to Warhol’s iconic colour games.

Andy Warhol
Andy Warhol was born Andrew Warhola August 6, 1928. From an early age, Warhol showed an interest in photography and drawing. After attending Carnegie Mellon University , Warhol moved to New York and worked as an illustrator for several magazines including Vogue, Harper's Bazaar and The New Yorker. In 1952 the artist had his first solo exhibition and four years later participated in his first group show exhibited at the Museum of Modern Art .

Appropriating images from popular culture, Warhol created many paintings that remain icons of 20th-century art including the Campbell's Soup Can, Marilyn and Elvis series. Warhol worked in a variety of mediums from painting to photography and in the eighties hosted his own talk-show on MTV.

Andy Warhol died February 22, 1987, firmly established as one of the most important artists of the 20th century.