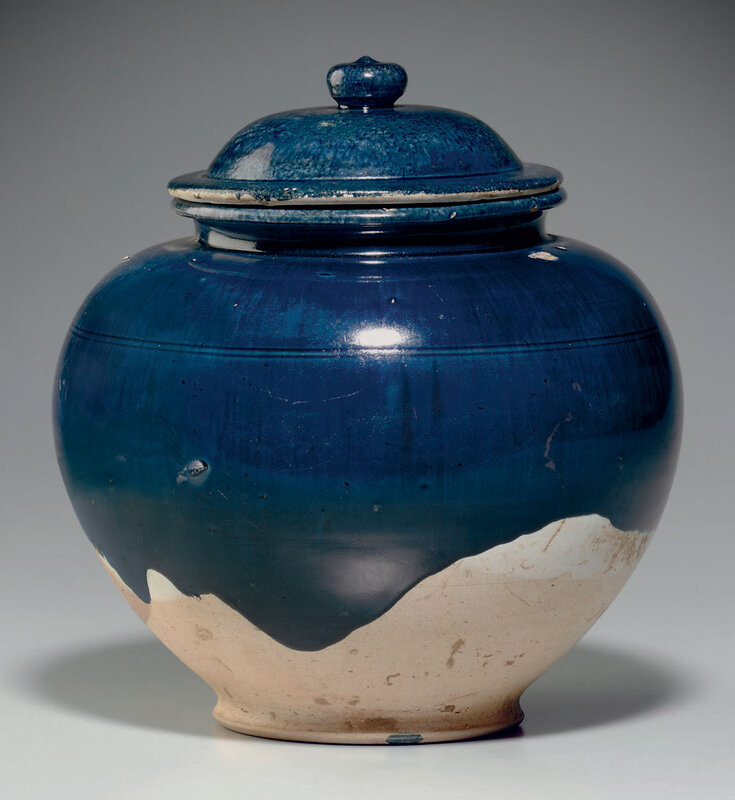 Covered with a rich dark blue glaze that continues over the lipped rim and falls in an irregular line on the lower body to expose some of the white slip underlayer, the interior covered with a clear glaze wash, raised on a ring foot, the body of buff color, the domed cover similarly glazed

Note: The result of Oxford Authentication thermoluminescence test no. C208c16 is consistent with the dating of this lot. Modeled standing foursquare on a rectangular base with head turned slightly to the left and ears pricked, the long segmented mane swept over onto one side of the neck, richly arrayed in trappings hung with foliate medallions and with a long fur blanket draped over the saddle, with orange, pink and black pigments.

Property from The Fribourg Family Trust. 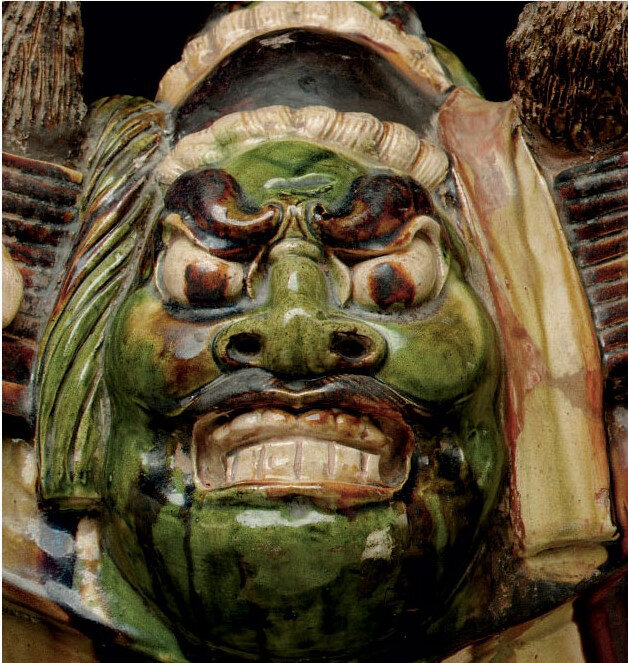 Realistically modeled, with head arched back in a trumpeting bray, replete with elaborate saddlebags modeled as large grimacing monster masks glazed in green, the camel covered predominantly in cream and amber glaze with the carved details of the fur glazed in brown.

Note: This massive and exceptionally handsome camel is a particularly fine example of the type of figure that was made to go into the tombs of the Tang elite. Such models, which would have been very expensive to purchase, provided an obvious indication of the wealth of a family who could afford to inter such costly goods with their deceased relative. Not surprisingly, camels have been found among the burial items in a number of the Tang imperial tombs, as well as some of those belonging to other members of the Tang nobility.

The two-humped Bactrian camel was known in China as early as the Han dynasty, having been brought from Central Asia and Eastern Turkestan as tribute. Its amazing ability to survive the hardships of travel across the Asian deserts was soon recognized, and imperial camel herds were established under the administration of a special Bureau. These herds, numbering several thousand, were used for a range of state duties, including the provision of a military courier service for the Northern Frontier. Camels were not only prized as resilient beasts of burden, their hair was also used to produce a cloth, which, then as now, was admired for its lightness and warmth. Even camel meat was regarded as a delicacy, with the hump being noted as particularly flavorsome. 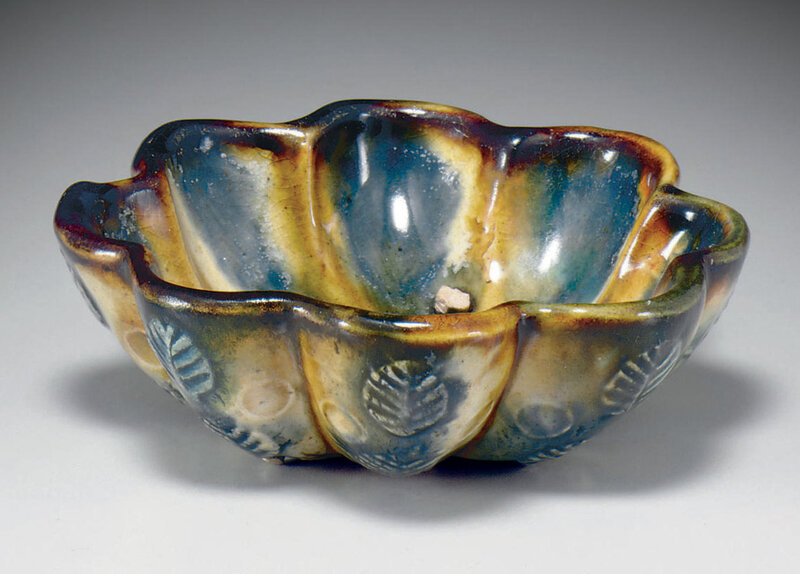 Each lobe relief-decorated on the exterior with two vertically positioned leaves flanked by circles, the applied base formed by eight further leaves radiating from a small circular center, the lobes outlined in amber and striped in blue glaze on the exterior and interior, with three spur marks on the interior and on the base The shallow dish formed as four trefoil-shaped arms, the interior resist-decorated in green and cream glaze in contrast to the pale amber glaze on the exterior, which also covers the tops of the four leaf-shaped loop supports.