Modelled as a seated lion supporting a large double-gourd bottle balanced on a tasseled saddle, the lion's mane, eye pupils, beard and tail accented by lines and dabs of underglaze blue as well as blue decorative florets and cord of the neck bell, the base of the double-gourd flask moulded with a band of lappets picked out in underglaze blue; the vessel also applied with a glossy, clear glaze; flat base unglazed; 6½ x 6¼ x 5 1/8in. (16.4 x 15.8 x 13cm.) -  Estimate $300,000 - $350,000

Notes: The long history of Korean ceramics includes a tradition of whimsical, humorous animal sculptures. In the Koryo dynasty, celadon waterdroppers were modeled in the shape of ducks, monkeys, fish-dragons and dragon-headed tortoises. A Chinese scholar who visited Korea in the twelfth century went out of his way to comment on a celadon incense burner with a charming lion perched on its cover. 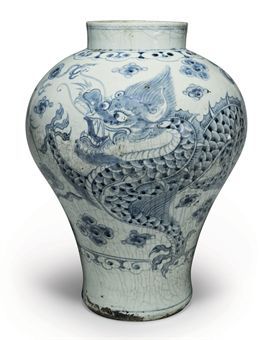 Of high-shouldered ovoid form with tall, upright neck, decorated in cobalt underglaze with two four-clawed dragons chasing the flaming pearl in the midst of scallop-shaped clouds, the wide frieze between cloud and line borders, the foot and rim encircled by narrow single or double-lines of underglaze blue and the whole jar applied with a crackled clear glaze; 16¾in. (42.3cm.) high - Estimate $100,000 - $120,000 With bulbous lower body rising from a short, inset foot to the tall, cylindrical neck ending in a rolled lip, painted in crisp strokes of underglaze blue with elements of the Ten Signs of Long Life (Shipjaengsaeng), here pairs of mythical tortoises, cranes and deer and immortal fungus shown amongst billowing clouds below the distant sun setting beneath craggy cliffs, the vessel also decorated with a narrow blue line around the foot and with a blue-tinged clear glaze of even lustre; 11¾in. (29.8cm.) high - Estimate $60,000 - $80,000 Of compressed peach form balanced on a high ring foot and moulded with a curved, cylindrical side spout, decorated with a powdery transparent glaze; air hole drilled next to the point at the center top; foot rim unglazed; 2¾in. (7cm.) high; 4¼in. (10.4cm.) diameter - Estimate $45,000 - $50,000 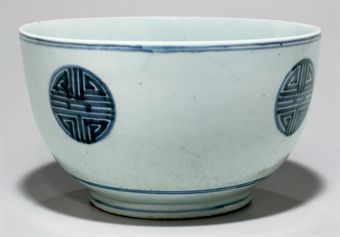 The deep circular bowl balanced on a raised ring foot decorated with four stylized longevity medallions of cobalt blue evenly spaced around the perimeter, the well additionally painted with a longevity medallion of the same size, the exterior of the rim and lower body above the foot painted with underglaze-blue double lines and around the foot with a single blue line, all beneath a clear glaze of blue cast; 10 1/8in. (25.7cm.) diameter; 5 7/8in. (14.8cm.) high - Estimate $45,000 - $50,000 The shallow dish resting on a raised circular foot painted in light and dark washes of underglaze blue with fishermen in a bay before a backdrop of pine-studded cliffs, the closer shoreline crags dotted with pines and flowering trees, the masts of four anchored boats shown near the rim, the landscape all below a double-line border, a single line of underglaze blue encircling the foot, the dish also covered by a transparent glaze; foot rim unglazed; 7 3/8in. (18.7cm.) diameter; 2in. (5cm.) high - Estimate $30,000 - $35,000 Of bulbous form rising from a high, flared foot to a cup-form mouth, decorated around the midsection with incised leaves and below the neck with a collar of incised lappets, the body also brushed with thin white slip and applied with a transparent glaze of high sheen and distinct green cast; 5¼in. (13.2cm.) high; 5¾in. (14.6cm.) diameter - Estimate $30,000 - $35,000 The slender ovoid body with high, swelling shoulders and cup-form mouth, incised with delicate lines that form lotus blossoms on long, curling stems and cranes and willows, the vessel also applied overall save the flat foot rim with a thick celadon glaze running in several thick drops and patches and with high gloss; 11 1/8in. (28.2cm.) high - Estimate $15,000 - $20,000 Of high-shouldered ovoid form with tall, upright neck, painted on the body with a single three-clawed dragon writhing through clouds below a cloud collar, the neck painted with two scalloped lines and the neck and base encircled by parallel rings, all executed in underglaze blue beneath a glossy transparent glaze; 14½in. (36.8cm.) high - Estimate $15,000 - $20,000 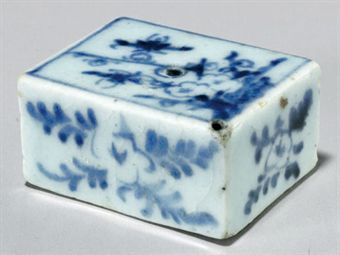 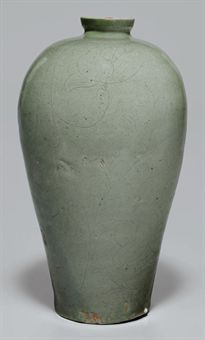 Of ovoid form with inset neck and extended, rolled lip, incised and inlaid in white slip with a collar of auspicious fungus heads at the neck and with a band of stiff leaves at the foot, both framing a frieze of cranes flying above paired willows and lotuses executed in white and iron-slip inlay, the vessel also decorated with a glossy greyish celadon glaze; 11 13/16in. (30cm.) high - Estimate $8,000 - $10,000 The bowl of conical form with petiolate rim and impressed in the well in slight relief with a lotus blossom and applied overall with a celadon glaze; three spur marks within the circular foot rim; the shallow, round saucer also moulded in the well with a flower and decorated with a celadon glaze with emerald flushes and dense craquelure; three spur marks on the wide, flat base
Bowl 7 3/8in. (18.6cm.) diameter; saucer 5¼in. (13.2cm.) diameter (2) - Estimate $2,500 - $3,000

Property from the Dr. and Mrs. William L. Corbin Collection