"The Nepalese Legacy in Tibetan Painting" @ the Rubin Museum of Art

"The Nepalese Legacy in Tibetan Painting" @ the Rubin Museum of Art 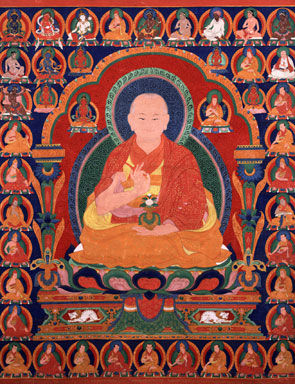 NEW YORK, NY.- For centuries Tibetans looked to their Buddhist heartland, India, for spiritual inspiration. During the second spread of Buddhism to Tibet, they also faithfully reproduced the sacred art of the Pala kingdom in northeastern India. But when Turkic raiders destroyed India's key monasteries in 1203, Indian Buddhism was wiped out, leaving Tibetan artists to turn to Nepal for artistic inspiration. Not only was Nepal the only nearby surviving center of traditional Buddhist art, it was also home to the Newar artists of the Kathmandu Valley, who were well known and sought out for their extraordinary skill in painting, sculpture, and wood working.

Basing their works originally on Indian models, the Newars gradually developed their own distinctive style. Within a generation after the disappearance of Indian Buddhism, Tibetans had learned and begun to widely employ the Newar style, or Beri as it is now known. The style first took root in Tibet’s Tsang Province, which lay nearest Nepal, and it was practiced for over four centuries, reaching its height from 1360-1460 when it was adopted as Tibet’s universal painting style.

The Nepalese Legacy in Tibetan Painting marks the second in a series of exhibitions curated by Dr. David Jackson that explore important Tibetan painting styles. In this presentation, Dr. Jackson traces the chronological development of the Beri style, highlighting key artistic and structural features. To the untrained eye, distinguishing Beri from other styles can prove challenging. To give basic stylistic orientation, he introduces five key stylistic features that can be found repeatedly throughout the exhibition. To make the comparison easier, he pairs two Beri paintings with paintings of the Pala style that share a common subject.

Comparing paintings side-by-side in this way, one begins to notice the Beri style’s dark indigo blue backgrounds, predominant red tones, simpler head nimbuses, decorative scrollwork, and thin yellow edges that act as outer borders and inner dividing strips between figures. Some subtler yet telling trademarks of the Beri style include distinctive architectural details of throne backs, teardrop-shaped jewels that replaced those of sharper triangular or conical shapes common in Pala depictions of crowns, and even the lower robes of peaceful deities which are longer and cover their knees, unlike the bare knees and thighs characteristic of the Pala style.

The Nepalese Legacy includes examples from each of the three main periods of Beri history: Early Beri (1180-1360), Beri as a Universal Tibetan Style (1360-1460), and Later Beri (1460-1620). Among the most notable works in The Nepalese Legacy is a masterful painting containing four minutely-detailed mandalas created by a group of Newari painters who, in the mid-15th century, decided to visit and work in Tibet at Ngor Monastery; the last two known major commissions in the Beri style; and important loans from the Walters Art Museum, the Los Angeles County Museum of Art, The Metropolitan Museum of Art, and a number of private collections.

The exhibition concludes with a look at paintings commissioned by abbots of the legendary monastery of Ngor Ewam Choden, one of the most famous sites of later Beri patronage in Tibet. The monastery was founded in 1429 by a great monastic reformer of the Sakya School named Ngorchen who, along with later abbots, commissioned many important works of religious art, particularly exceptional sets of Beri-style thangka paintings. Largely for this reason, many Beri thangkas have been erroneously referred to as “Ngor paintings,” but evidence shows that similar works were commissioned elsewhere. Late Beri paintings are more likely to be correctly attributed to Ngor, as Ngor abbots remained dedicated to the style as late as the second half of the 16th century, decades after most Tibetan artists had joined the Chinese-inspired “landscape revolution.” By the early 17th century, the Beri style had virtually died out.

Earlier scholars tended to overestimate the extent and duration of the Newar influence in Tibetan art while oversimplifying the geographical range and sectarian scope of the Beri style. These scholars tended to assume that the majority of Beri paintings were commissioned in Tsang by the Sakya School of Tibetan Buddhism, and several important Beri works have hitherto been misidentified as Sakya art. In recent years scholars have begun to reexamine paintings’ inscriptions and lineage details, rectifying a number of misidentifications. In part, The Nepalese Legacy seeks to correct the erroneous limitation of the Beri style to the Sakya School of Tibetan Buddhism, and to demonstrate the full extent of its chronological development, religious patronage, and geographic scope. 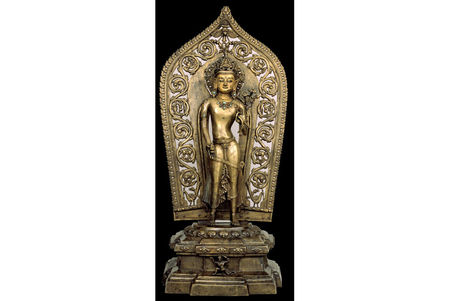