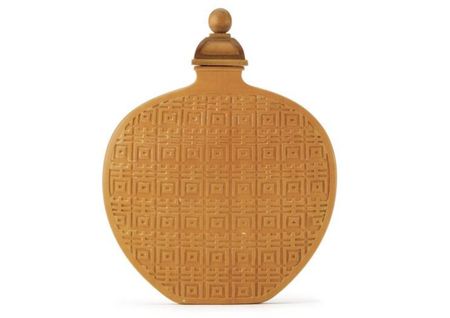 NOTE: Bamboo veneer, or zhuhuang, was a technique developed in Jiangxi, province in the mid-Qianlong period and taken up by the Palace Workshops thereafter remaining popular in the Court into the 19th century. It required tremendous skill, using the inner layer from the cortex of the bamboo, which contained a hard enamel and was resistant to insects. It was this inner layer that was used to create the veneer, which was decoratively applied to a base form, usually of bamboo, and subsequently carved.

The subject of the present bottle, the 100 shou or longevity characters, is appropriately matched with the bamboo medium as the grass is known for its long life. A bamboo veneer bottle such as this would have been appropriate for a scholar-official in the court as bamboo is also representative of the attributes of a gentleman, being strong, yet flexible, and evergreen (symbolizing constancy).