The twelve Zodiac Heads/Circle of Animals by Ai Weiwei

SAO PAULO.- Ai Weiwei’s Zodiac Heads/Circle of Animals installation opened at the 29th Sao Paulo Biennale in Brazil. The Biennale opened on September 25th and drew large crowd of art aficionados from all across the globe. The Zodiac Heads/Circle of Animals is the centerpiece of a global, multi-year touring exhibition that will be presented in the United States, Europe, and Asia.

The title of the this years Biennale, "Há sempre um copo de mar para um homem navegar (There is always a cup of sea to sail in)" was inspired by a line by the poet Jorge de Lima (1895 - 1953) in his work Invenção de Orfeu (1952). The concept of this year's São Paulo Biennial is based on the notion that it is impossible to separate art from politics. Art, through ways of its own, is "capable of blocking the sensorial coordinates through which we understand and inhabit the world by bringing into it themes and attitudes that did not previously fit in, thus making it different and wider."

In this sense the title "There is Always a Cup of Sea to Sail in" epitomizes the curators' intentions, asserting the utopian dimension of art. According to them: "It is in the 'cup of sea' – or in this near infinite in which artists insist on producing their works – where in fact lies the power to move forward, despite everything else." As the author of the poem Jorge de Lima continues, "the power to sail on even without ships / even without waves and sand."

Chinese conceptual artist Ai Weiwei is considered one of the most important contemporary artists and social thought leaders both in China and on the world stage. As his first major public sculpture project Ai Weiwei has re-created the twelve bronze animal heads, representing the traditional Chinese zodiac, that once adorned the fountain of the Yuanming Yuan (Old Summer Palace) in Beijing.

Designed in the 18th century by two European Jesuits at the behest of the Manchu emperor Qianlong, the twelve animal heads originally functioned as a water clock fountain in the garden of the Old Summer Palace. In 1860, the palace was ransacked by French and British troops and the heads were pillaged.

In re-creating these objects on an oversized scale, Ai Weiwei focuses attention on questions of looting and repatriation, while extending his ongoing exploration of the “fake” and the copy in relation to the original. In his art, Ai Weiwei has continuously engaged Chinese history as a shifting site rather than a static body of knowledge. His adaptations of objects from the Chinese material canon, such as furniture and ceramics, are known for the subversive wit with which they twist these traditional forms toward new purposes. The re-envisioned zodiac heads address the precarious position of such objects, caught up in a set of cultural power dynamics that are radically in flux and evoke a still-resonant moment in the history of China’s relationship with the West. 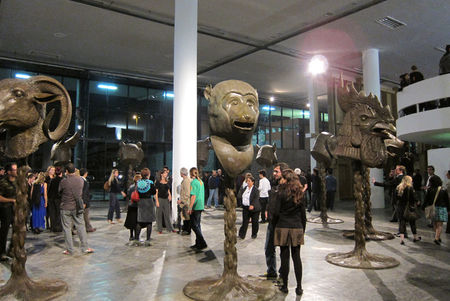 The twelve Zodiac Heads/Circle of Animals by Ai Weiwei are cast in bronze and positioned on circular bronze bases.