A rare blue, white and green lotus jar. Mark and period of Wanli

A rare blue, white and green lotus jar. Mark and period of Wanli 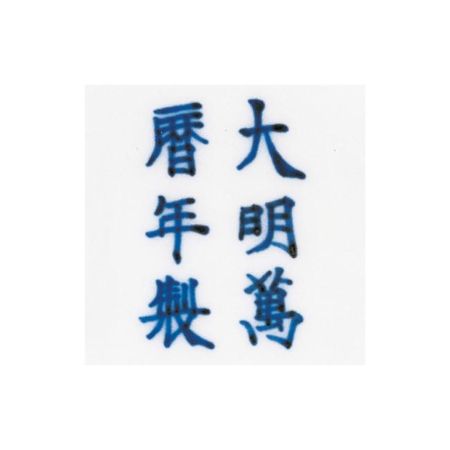 based on Chenghua period pieces, the ovoid body boldly painted with six vivid cobalt-blue lotus flower heads borne on blue-outlined foliate scrolls, the scrolls further enamelled in green, all between upright and pendant blue lappets collaring the short yellow-enamelled neck and skirting the foot, the base inscribed with a six-character reign mark in cobalt blue; 11.5 cm., 4 1/2 in. - Estimate 1,000,000—1,500,000 HKD. Lot Sold 1,220,000 HKD

NOTE: Two closely related examples of slightly smaller proportions, in the Shanghai Museum, Shanghai, are published in Mingdai guanyao ciqi, Shanghai, 2007, pls 1-100 and 1-101. Another jar of very similar form and design appears to be in the collection of the Museé Guimet, Paris, by repute.

This jar is a close imitation of Chenghua originals which were often inscribed with a tian mark on the base; see one illustrated in The Complete Works of Chinese Ceramics, vol. 13, pt. II, Shanghai, 2000, pl. 74 ; and two further jars, in the National Palace Museum, Taipei, included in the Special Exhibition of Ch'eng-Hua Porcelain, National Palace Museum, Taipei, 1976, cat. nos 159 and 160. Yeh Pei-Lan in Gems of the Doucai, Taipei, 1993, p. 150, notes that Wanli doucai wares were mainly in the Chenghua style in terms of the shape and design as Chenghua porcelain was considered to be of the highest quality and thus of great significance.

A related jar decorated in bright polychrome enamels with a scrolling lotus between lappet borders, with a Wanli reign mark and of the period, from the collection of Sir David Harrel, was sold in our London rooms, 19th June 2002, lot 43; and another, from the Saint Louis Art Museum, was sold at Christie's New York, 30th March 2005, lot 340.