LONDON.- Tate and Unilever today presented Chinese artist Ai Weiwei´s commission in The Unilever Series for the Turbine Hall at Tate Modern (12 October 2010 – 25 April 2011). He is the first artist living and working in the Asia-Pacific region to be commissioned for the series.

Born in Beijing in 1957, Ai Weiwei is one of the most prominent and influential figures in Chinese art today. In his many roles as conceptual artist, curator, critic, designer and architect, his work encompasses a wide range of challenging and often provocative activity. Ai has played a key role in the development of contemporary Chinese art over the last two decades, from his role in the radical avant-garde ‘Stars Group’ in 1979, to his collaboration with Herzog & de Meuron in designing the national ‘Bird's Nest’ stadium for the 2008 Beijing Olympics.

After living in the United States from 1981 to 1993, Ai returned to his native Beijing and created the seminal work Dropping a Han Dynasty Urn 1995. This photo-triptych depicted the artist dropping an ancient ceramic vase, which smashed on the floor at his feet. This work not only began the artist’s continuing reuse of antique readymade objects, it also demonstrated his questioning attitude towards cultural values and social history. For Fairytale 2007 Ai invited 1001 Chinese citizens to ‘colonise' Kassel in Germany for the Documenta 12 exhibition and distributed 1001 Qing and Ming Dynasty chairs in venues across the city. For Template 2007 he used more ancient readymades, in the form of 1001 wooden doors and windows from destroyed Chinese buildings. These were installed as a huge sculpture that collapsed in a storm soon after completion, creating a twisted, crumpled structure that the artist chose to preserve.

The past year has seen some of Ai Weiwei’s most profound works, while continuing to develop his concern for the social and political. To commemorate the 2008 Sichuan earthquake he produced Remembering 2009, a wall of Chinese text that covered the façade of the Haus der Kunst in Munich, made up of thousands of children’s backpacks. The text reads ‘She lived happily for seven years in this world’, a quote from a mother who lost her child in the disaster. Also for the Haus der Kunst, Ai manufactured a carpet to cover 380 square metres of floor space. Entitled Soft Ground 2009, it was painstakingly designed to mimic each of the 969 individual tiles on the floor below, becoming a map of the traces left by 70 years of exhibitions and visitors. The artist has said that “Liberty is about the right to question everything”, and whether visually subtle or spectacular, Ai Weiwei’s large-scale installations are always the result of a constantly enquiring mind and constitute a powerfully thought-provoking body of work.

Ai Weiwei has exhibited internationally, including recent solo shows at Mori Art Museum, Tokyo and Haus der Kunst, Munich, and has contributed to many group exhibitions around the world, including at Documenta 12, Kassel, Germany and Tate Liverpool, UK. Ai also founded the design company Fake Design and co-founded the China Art Archives and Warehouse in Beijing. The Unilever Series: Ai Weiwei is curated by Juliet Bingham, Curator, Tate Modern.

Vicente Todolí, Director, Tate Modern said: “As Tate continues to widen its representation of art from all parts of the globe, we are delighted to be commissioning one of China’s greatest living artists for The Unilever Series. Frequently conceived on a grand scale, Ai Weiwei’s compelling installations are among the most socially-engaged works of art being made today, so it will be thrilling to see how he responds to the vast, public environment of the Turbine Hall at Tate Modern this October.”

Gavin Neath, Senior Vice President, Global Communications, Unilever said: “Unilever is proud to support a commission that enables an artist of Ai Weiwei’s calibre and reputation to take on such a challenge as the Turbine Hall. Over the last ten years, The Unilever Series has captured the imagination of over 22 million people who have experienced exceptional and original installations. We await the unveiling of the 11th commission with excitement and anticipation.” 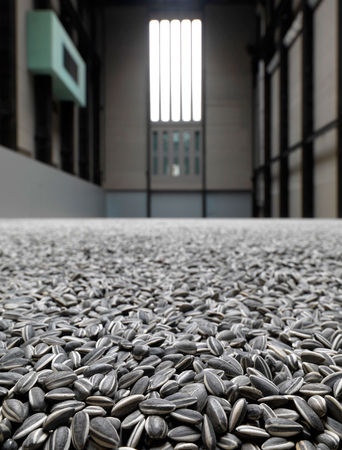