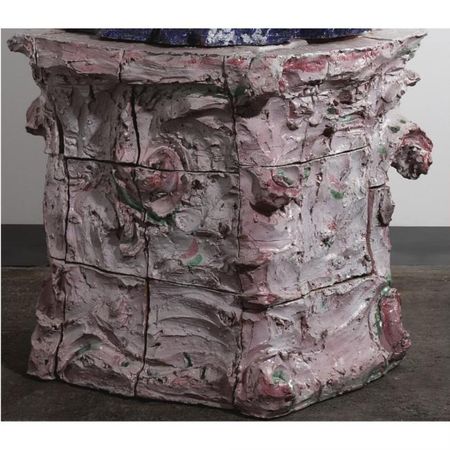 PROVENANCE: Gi. Vi. Emme, Milan
Private Collection, Milan
Acquired directly from the above by the present owner in 1990

NOTE: Lucio Fontana's extraordinary sculpture Woman with flowers is one of the greatest ceramic works by the artist striking for its visual intensity and technical virtuosity. As indicated in Lucio Fontana's Catalogue Raisonnée (Enrico Crispolti, Lucio Fontana Catalogo Ragionato, Vol. I, Milan 2006, p.213), Woman with flowers was probably executed in connection with the Miss Italia contest in 1948 and it is referred to as Portrait of Teresita Rasini in the literature. Met in 1930 and married in 1952, four years after the present sculpture was created, Teresita embodies Fontana's ideal of Beauty. Resumed in 1946 following the end of the Second-World War, the beauty contest Miss Italia, organized by Gi. Vi. Emme, the first owner of the work, was a manifestation of the vibrant post-war optimism in Italy. Woman with flowers marks a significant moment in Lucio Fontana's life and artistic career. Returned to Milan a year earlier from Buenos Aires, Fontana signed his first Manifesto dello Spazialismo and participated to the XXIV Venice Biennale, exhibiting two ceramic sculptures alongside his first 'spatial sculpture'. As the artist affirmed: 'It may be foolish, but I don't care!!! My desire to return and to free myself from this environment for a time is too strong. The choice was between suicide and returning, and I chose the latter because I hope to produce more ceramics and sculptures that will make me feel that I'm still alive' (the artist cited in: Enrico Crispolti, Lucio Fontana Catalogo Ragionato, Vol. II, Milan 2006, p. 1013)

Depicting a classical scene, such as a woman carrying flowers, Woman with flowers is incredibly revolutionary due to Fontana's radical and dynamic approach to space and sculpture. While the movement of the dress, flowers and hair are treated in a free-floating manner, the monumentality of the scale is incredibly rare for such works by Fontana. The vivid blue of Teresita's dress in deep contrast with the virginal white of her skin suggests a reference to the colours used by the Renaissance master Andrea della Robbia in his polychrome ceramics. In contrast with the placid surface of della Robbia's works, Fontana's Woman with flowers is a triumph of movement and fluidity of forms, undermining the principles of sculpture in such way it only happened before during the Baroque. The classical references to figurative sculpture are the deliberate use of contrapposto and the movement of the vest recalling the harmonious beauty of the infamous Nike of Samothrace (c. 220-190 BC).

Trained as a neo-classical sculptor, studying marble-carving under Adolfo Wildt at the prestigious Accademia di Brera in Milan, Fontana's roots as a sculptor with a particular sense for space are highly visible throughout his career. Soon after leaving Brera, Fontana rejected its academic prescriptions, as he recalled in an interview some years later "I took a great lump of plaster, gave it the rough shape of a seated man and then threw tar over it. Just like that, as a violent reaction. Naturally, Wildt took a dim view of it ". (Interview in La Nación, Buenos Aires, 6 June 1943. Cited in Jole De Sanna, Lucio Fontana: Materia Spazio Concetto, Milan, 1993, p.10). This impelling revolutionary approach characterized all the ceramic works he produced throughout his life. Instead of carving marble according to neo-classical tradition, Fontana sculpted forms with his hands exploiting the advantage of the malleable clay medium. Fontana's loose and swirling treatment of the clay imbues the figure with an extraordinary energy, or as he himself paradoxically described his ceramic works: "A motionless earthquake" ("terremotata ma ferma") (the artist cited in: 'La mia ceramica', September 1939, in Exhibition Catalogue, London, Hayward Gallery, Lucio Fontana, 2000).

The strong presence of Fontana's hands and his formal interventions in Woman with flowers are strikingly remarkable. In the same way Fontana subsequently used his fingers to tug and expand the Buchi (holes), and his hands to caress open the slits in his radical Tagli , the artist moulded the ceramic with vigorous boldness and extreme delicacy. Through the visible traces of Fontana's artistic creation, he achieves a sense of dramatic expression and gentle intimacy.

One of the largest ceramic works by Fontana, Woman with flowers is a masterpiece at the peak of an artistic vein that he continued to mine throughout his life. It is a reminder of Fontana's primary vocation as a sculptor. The date of its creation coincides with the most creative transitional period and the innovative emergence of his 'spatial sculptures', just a year before the piercing of his Buchi in 1949. Woman with flowers beautifully testimonies Fontana's unique sensitivity towards form, material and colour.