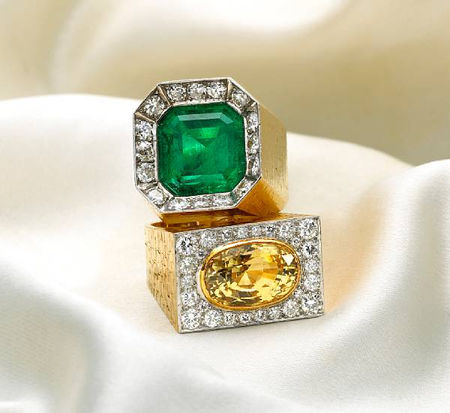 The first auction to focus on the work of legendary jewelry Andrew Grima, since his death in 2007, will be presented by Bonhams New York on October 19th.

British Royal jewelry, designer and artisan, Grima was the foremost modern jewelry designer in the West End of London in the 1960s and 1970s with clients including Queen Elizabeth, Princess Margaret, Princess Anne, The Duke of Edinburgh, Barbara Hepworth and Jacqueline Onassis. Grima gained recognition following the 1961 Exhibition of International Jewelry where his distinctive pieces featuring highly textured materials and abstract shapes led to his appointment as a Crown Jeweler in 1970 commissioned to make items of jewelry for the British and Scandinavian Royal Family.

Consisting of 35 Grima designs, the collection comes from the New York estates of Marvin and Laura Speiser and was amassed over the course of two decades of close friendship between the Speisers and Andrew Grima and his wife Jojo. The Speisers' and Grimas' were introduced in London in the early 70s and their friendship evolved through the course of yearly meetings and weekly phone calls. The couples shared a mutual admiration for each others' aesthetics and artistic gifts, with Grima actually owning works by Mrs. Speiser who was a respected ceramic artist in her own right.

The Speisers' personal affection for Grima, coupled with their respect for his design genius, is evidenced in the remarkable collection of special, limited edition pieces being presented.

Highlighting the sale is a circa 1988 emerald and diamond ring. Centering a cut-cornered, square-cut 11.35 carat emerald 'pool' within a raised surround of round brilliant-cut diamonds, the ring is completed by a textured gold mount. Exemplary of Grima's work, this striking ring is estimated at $20,000-30,000.

Highlighting the sale is a circa 1988 emerald and diamond ring. Centering a cut-cornered, square-cut 11.35 carat emerald 'pool' within a raised surround of round brilliant-cut diamonds, the ring is completed by a textured gold mount. Exemplary of Grima's work, this striking ring is estimated at $20,000-30,000. This emerald was a gift from Marvin to Laura in 1985, which he gave to her on an airplane en route to Los Angeles. Originally, the emerald was set simply, with triangular-shaped diamond shoulders. Years later, the Speisers were having dinner with Andrew Grima and he expressed concern for a fragile stone to be in a mounting so exposed. Therefore, he designed the current setting for it, to protect the emerald. The triangular-shaped diamonds were incorporated into the ring. Of great interest is a cultured pearl, gold and diamond necklace with cultured pearl drop. Designed as textured gold abstract shaped gold beads mirrored by fresh water pearls and diamonds, the lot carries an estimate of $12,000-15,000. Also included in the auction will be a 'sunburst' brooch which is similar to the one designed exclusively for Queen Elizabeth who presented the piece as a gift to Madame Pompidou in 1972 on her State Visit to France. One of only four created, this example is designed as rays of textured gold centering a forest green tourmaline and can be worn as a pendant as well as a brooch. The impressive piece is estimated of $8,000-10,000. The Fine Jewelry sale, also to be presented that day, will feature excellent collecting opportunities including a cut-cornered rectangular-cut sapphire, weighing 44.00 carats within a surround of marquise and round brilliant-cut diamonds pendant from Rio, Brazil (est. $100,000-150,000); a South Sea cultured pearl and diamond necklace by Van Cleef & Arpels (est. $70,000-90,000); an Art Deco diamond and sapphire bracelet by Ostertag (est. $30,000-50,000); and a notable collection of antique jewelry. comprising three rows of forty-one, forty-five and forty-nine round cultured pearls, measuring approximately 15.0 to 9.9mm, completed by a diamond and cultured pearl scrolling clasp; detaches to be worn as one, two or three strands; signed VCA for Van Cleef & Arpels, nos. NY46123 and NY43998; estimated total diamond weight: 4.50 carats; mounted in platinum; lengths: 20 1/4, 21 1/4, and 23 3/4in.

The property from the Estate of one of the great Hollywood legends, Jennifer Jones Simon. Born Phylis Lee Isley in Tulsa, Oklahoma on March 2, 1919, Jennifer Jones was literally delivered into an acting family. Her parents owned and starred in the Isley Stock Company, a theatrical troupe that toured the Midwest. As a child she spent her summers acting, selling candy and taking tickets for the company.

After several months at Northwestern University, Jones transferred to the American Academy of Dramatic Arts in New York. It was there she was cast as Elizabeth Barrett opposite Robert Walker's Robert Browning in the popular stage drama, The Barretts of Wimpole Street. The couple married and went to Hollywood on their honeymoon in 1939, where they found small roles in the film industry but chose to settle in New York and dedicate their lives to the theater.

Jones met legendary Hollywood producer David O. Selznick in New York when she read for the lead in the hit stage play Claudia that Selznick was planning to make into a movie. Although she did not win the role, Selznick was taken by Jones and saw a future for her in film. Selznick, probably best known for producing the 1939 epic, Gone with the Wind and Alfred Hitchcock's 1940 Hollywood directorial debut, Rebecca, got Jones the role of Bernadette Soubirous, the young French peasant girl in the film version of Franz Werfel's best-selling novel The Song of Bernadette (1943). Jones and the film were a hit. The Song of Bernadette brought the little-known actress instant fame and an Academy Award® in 1944 for Best Actress in a Leading Role.

Jones and Selznick were married in 1949. He managed his wife's career until his death in 1965. In 1971, Jones married Norton Simon, the multimillionaire industrialist who had turned an orange juice bottling plant into a conglomerate that included the brands of Hunt Foods and Canada Dry. Simon retired two years earlier to focus on collecting works of art, which remain today a the core of the Norton Simon Museum in Pasadena, California, one of the state's most recognized cultural institutions.

In addition to her film career and family life, Jennifer Jones Simon was also dedicated to serving others. As early as the 1950s, Jones won accolades for her support of wounded soldiers in the Korean War. She was also an ardent supporter and fundraiser for numerous mental health organizations, the Hereditary Disease Foundation and was President and Chair of the Norton Simon Museum.

The Van Cleef and Arpels triple strand pearl necklace offered here was a gift from Norton and it is obvious how much Jennifer cherished it. The pearls were worn during nearly every public appearance and, as George Christy noted in his 'The Great Life' column of October 14, 1999, "Superstar glamorous in a vermillion Galanos gown accessorized with her three-strand necklace of perfect pearls, Jennifer greeted guests as they toured the museum before dinner." Truly this necklace was a part of Jennifer and not just a beautiful piece of jewelry, but a part of Hollywood history, a part of philanthropic history and even part of art history. 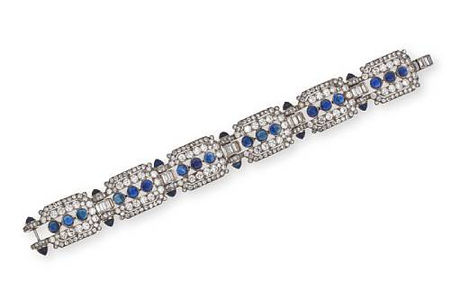