A stunning piece of China's Imperial history – a seal personally commissioned by the Qianlong Emperor (1711-1799) - will be the highlight of Bonhams Sale of Fine Chinese Art on November 11th in London.

The perfect four centimeter square jade seal bearing the inscription 'Zi Qiang Bu Xi', ('Self-Strengthening Never Ceases') is closely linked to the Emperor's 80th birthday celebration which coincided with the 55th year of his reign and is an iconic reminder of China's golden age. The history and provenance of this artefact speaks both of a simple and elegant personal aesthetic as well as the stamp of Imperial power. In his article on the seal, Guo Fuxiang, a curator at the world famous Palace Museum in the Forbidden City in Beijing, a world authority on Imperial history, writes: "The reason this inscription was chosen for the seal is revealed in the Emperor's personal comments which indicates a determination not to become indolent, but to remain mindful and diligent, doing his best to govern his subjects before relinquishing power. The term Ziqiang Buxi – Self Strengthening Never Ceases – served as a constant reminder to him."

One of the glories of his long reign was his legacy of stunning artefacts and literature. And at the heart of this cornucopia of Chinese art is this object, the Emperor's personal seal with wording that personifies his state of mind. The seal would have originally been one in a set of three jade seals, used to make impressions at the right or left corner of calligraphy artworks. The imprints of all three seals are in the Qianlong Baosou collection in the Beijing Palace Museum. 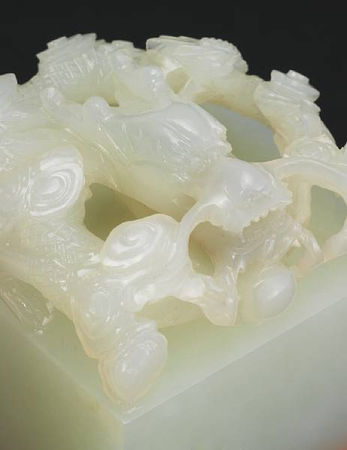 Asaph Hyman, a Senior Specialist in Bonhams Chinese Art Department, comments: "The discovery of this long lost symbol of Imperial China at its zenith is extremely important for all those passionate about the history of Imperial China. There is no other work of art with which the Emperor would have been as personally associated as with his personal seal. Bonhams is greatly honoured to be selling an Imperial seal of such importance. "

Thanks to impeccable record keeping it is possible to date the commissioning and final delivery of this Imperial seal.

According to the records of the Neiwufu Zaobanchu Huajidang (Archives Concerning the Administration of Arts and Crafts of the Imperial Household Workshops): on the 25th day of the 12th month in the 57th year of the Qianlong Emperor's reign (1793), the eunuch Mei Jinbao reported that the Chief-Administrator Zhang Jixi has happily presente a set of three pieces of white jade along with three sheets of paper each containing a yinshou type seal impression facsimile, with inscriptions of yanchunge on the primary seal, another with the inscription Bazheng Maonian, and the last one with the inscription Ziqiang Buxi... . It is decreed: send them to Suzhou to be carved according to the attached inscriptions. This is the Imperial Edict on the 2nd day of the 7th month of the 58th year of the Qianlong Emperor reign (1793), the Suzhou workshops returned with honour the white jade Yanchunge set ... they were presented to the Emperor and each was placed in its original setting.' 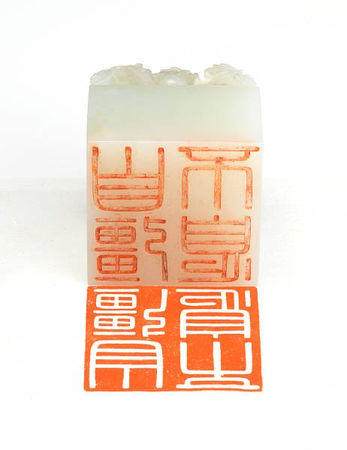 This extract provides us with three crucial pieces of information regarding the Ziqiang Buxi seal: Firstly, it gives us a definite date of when the present Imperial jade seal was crafted. The Imperial Edict for the jade carving was granted on the 25th day of the 12th month of the 57th year of the Qianlong Emperor's reign (1793). By taking into consideration the logistics and travelling distance between Beijing and Suzhou, it has been possible to determine that the date of production for the seal is approximately in the first half of the 58th reign year (1793).

Secondly, the Ziqiang Buxi seal is part of a set of three. This specific style of seal grouping is particularly evident towards the Qianlong Emperor's 80th birthday and the later part of his reign. The records also indicate that the quality of the jade piece is described as 'White jade'.

Thirdly, it provides us with the seal's earliest storage location. The Yanchunge yinshouzhang (label) which came with the seal set authenticates that this particular seal was created specifically for Yanchunge and sent directly to the Imperial Court in Beijing from the jade workshops in Suzhou. The Yanchunge is one of the buildings within the Jianfugong gardens, on the West of the Forbidden City. 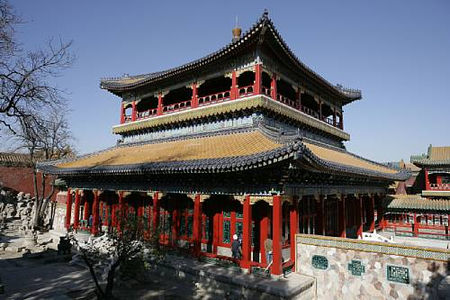 The Yanchunge was constructed in the 7th year of the Qianlong Emperor's reign (1742). This square pagoda has two levels on the exterior; three levels in the interior. The interior is elaborately decorated with fine furnishings and boasts intricate styles of architecture, hence known as Milou (Seductive Pagoda). The present Ziqiang Buxi seal was stored there amongst many other treasures from the Emperor's precious collection. When the Jiaqing Emperor came to power (1799), the Qianlong Emperor's precious treasures were re-organised and his scattered seal collection was compiled and stored together. This set of seals was probably removed from Yanchunge during this period and kept in the Emperor's treasure box. However, it is unknown as to when the seal actually left the palace. Provenance: a European private collection, purchased by the father of the present owner in the 1960s.

The father of the present owner, a high-ranking government official, was passionate from a very young age about art and archaeology in general and Chinese and other Asian Art in particular. This passion was sparked by a trip to Paris, home to the Musée Guimet, which increased his interest in Chinese art and led to his first visit to China in 1934. Later travels also included Tibet, India and Nepal and of course, Europe and America.

The present Imperial seal remained with the family and was given to his son.