The interior deeply carved through the layers of thick black lacquer with a central flower head, surrounded by three registers of concentric ruyi-heads, the exterior with a further band of ruyi, the base lacquered black, Japanese wood box

The term tixi can be literally translated as 'carved rhinoceros', and is recorded in use as early as the 9th century to refer a type of lacquer. The earliest recorded descrption of it (printed in 1366) explains that the term arose because of the similarities with a rider's leather saddle, which over time changes from black to red to brown and finally becomes a combination of all three colours, see H.Garner, Chinese Lacquer, London, 1979, p.70. While the technique is known to have been used as early as the Tang Dynasty, it rose to popularity during the Song and Yuan periods. Tixi lacquers from this period are known for the U-shaped profiles of their designs, as seen on the current dish.

This type of lacquer is also referred to by the Japanese term guri, which refers to pommel scrolls, which these designs are thought to resemble.

Compare another very similar but smaller dish with three registers of ruyi-heads in the Nezu Institute of Fine Arts, dated to the Northern Song period, illustrated in The Colours and Forms of Song and Yuan China: featuring lacquerwares, ceramics and metalwares, Tokyo, 2004, fig.63. 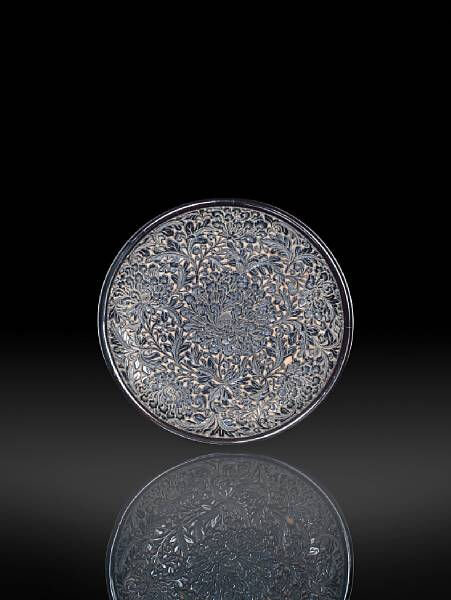 With shallow rounded sides, the interior deeply carved to the interior with a dense design of a large blossoming peony surrounded by further peony sprays, all borne on meandering leafy tendrils, the underside similarly carved with scrolling blossoms, the base lacquered brown, Japanese wood box

Bold, deeply carved floral designs, such the peony blossom seen on the present dish, are typical of the best examples of 15th century lacquer production. The dense composition and use of a large, central bloom can also be seen on another black-lacquered peony dish, dated to the 14th century, in the Tokugawa Museum, illustrated by K.Mono, Imported lacquerwork - Chinese, Korean and Ryukyuan (Okinawa). Selections from the Tokugawa Art Museum, Nagoya, 1997, Catalogue no.39

Another related dish in the collection of the National Museum of Denmark, Copenhagen, carved with large blossoming hibiscus blooms, is illustrated by H.Garner, Chinese Lacquer, London, 1979, fig.34. 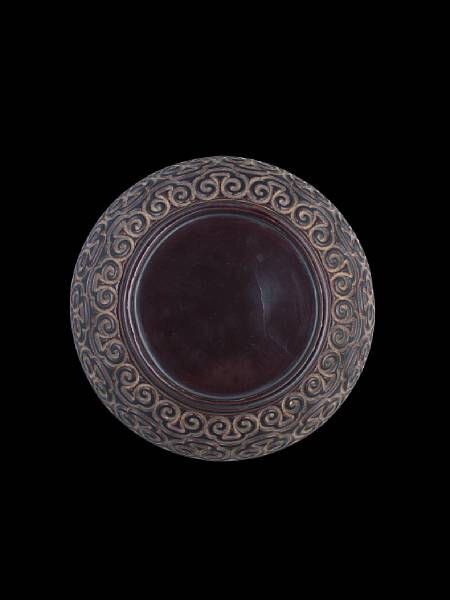 The domed cover and base both carved through the layers of black and red lacquer with registers of concentric ruyi-heads, the interiors and recessed base lacquered black, Japanese wood box.

Tixi lacquer continued to be produced in relatively large numbers during the Yuan through to the end of the Ming Dynasty. Tixi lacquer in the form of boxes and covers are, however, relatively rare. Compare a related black-lacquered bowl and cover, surmounted by a central finial and dated to the early 15th century, formerly in the Lee family collection, illustrated in Dragon and Phoenix. Chinese Lacquerware. The Lee Family Collection, Cologne, 1990, Catalogue no.10.

Another later example in the Victoria and Albert Museum, London, dated to the 16th century, unusually has the characters Tian xia tai ping within a central medallion on the cover: see H.Garner, Chinese Lacquer, London, 1979, fig.55. 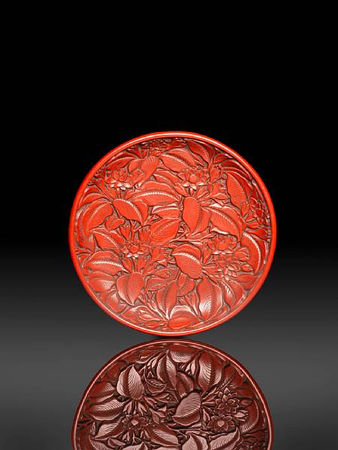 The largest group of fifteenth-century carved lacquers consists of those with floral decoration, such as the present example. In his 1979 publication, Sir Harry Garner argues the case that their bold and dense designs bear close affinity to silk brocade decoration of the period, which may have proved to be the inspiration for the design of foliate lacquer wares such as the present example, see H.Garner, Chinese Lacquer, London, 1979, p.86.

Oleanders are rarely depicted in Chinese art, and no comparable lacquer carved with this floral design appears to be published. However, for related dishes of the same period, carved with various foliate designs in similar dense compositions, see a slightly larger circular dish carved with peonies, formerly in the Lee Family collection, sold at Christie's Hong Kong, 1 December 2009, lot 1813. Similar stylistic comparisons, such as the dense floral composition and broad incised leaves can also be seen on a cinnabar lacquer box carved with camellias in the Victoria and Albert Museum, London, illustrated by H.Garner, ibid, pl.32. The square tray with canted corners, freely carved to the centre with a pictorial landscape scene, depicting an equestrian dignitary flanked by attendants crossing a bridge, with further figures standing and seated within open pavilions and gates, with two inscriptions reading Tangsha Fu and Jiangcheng, all set on the shore of a lake with islands and mountainous peaks in the background, the underside alternately carved with lychees and blossoming camellias, above a classic-scroll border at the foot, the base lacquered black, wood box; 18.5cm (7¼in) wide (2). Estimate: £80,000 - 120,000, HKD 980,000 - 1,500,000, USD 130,000 - 190,000

Square and rectangular dishes and trays with canted corners are typical of lacquer production during the middle of the Ming Dynasty. Compare a related square dish, similarly carved with equestrian figures crossing a bridge, illustrated in 2000 Years of Chinese Lacquer, Hong Kong, 1993, Catalogue no.73. Another of similar form and carved to the interior with another lakeside scene framed by scrolling peonies at the rim, attributed to Wang Song and dated to the middle of the Ming Dynasty, is in the Imperial Court Collection, illustrated in Carved Lacquer in the Collection of the Palace Museum, Beijing, 1985, fig.134.

A circular box and cover in the British Museum, dated to the 15th-16th century, is carved with a similar scene, with a procession of equestrian figures following a path to the left of the composition to an open gate and tiered pavilion full of seated figures, illustrated by H.Garner, Chinese Lacquer, London, 1979, pl.63.

A rectangular tray with canted corners carved to depict various dancers and musicians within a fenced garden terrace from the Lee Family collection was sold at Christie's Hong Kong, 1 December 2009, lot 1831, where it was noted in the catalogue footnote that the production of it and the related dish exhibited in Hong Kong in 1993 (referred to above) have both been attributed to the Yunnan or Dali regions. 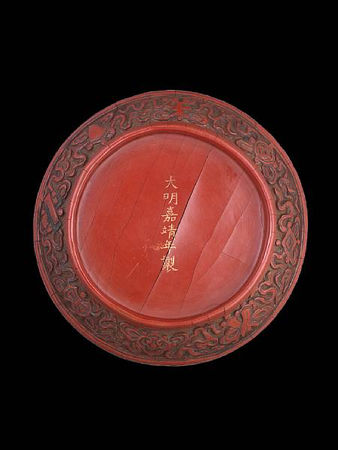 Deeply carved through the layers of cinnabar-red, dark green and brown lacquered-ground to depict a sinuous writhing dragon rising above turbulent crested waves, flanked by a peony and a lingzhi sprig growing from rocky outcrops, and below a circular 'shou' medallion, all against ruyi-shaped clouds and flame scrolls, enclosed by a border of ribboned 'precious objects', including the flaming pearl, wanzi and lingzhi fungus to the sides, the straight rims with a diaper pattern, the foot encircled by key-fret border, the interiors and the base all lacquered black, the reign mark incised in a vertical line to the centre of the base, wood box; 19.5cm (7¾in) diam. x 9.5cm (3¾in) high (3). Estimate: £55,000 - 65,000, HKD 670,000 - 800,000, USD 87,000 - 100,000

Only a small number of Jiajing mark and period polychrome lacquer 'dragon' boxes of this type are known. See one slightly larger example in the National Palace Museum, Taipei, the interior inscribed with a Qianlong inscription dated to bingshen, corresponding to 1776, illustrated in Carving the Subtle Radiance of Colors. Treasured lacquerware in the National Palace Museum, Taipei, 2008, fig.101. Another in the Palace Museum, Beijing is illustrated in Carved lacquer in the collection of the Palace Museum, Beijing, 1985, fig.196. Other examples of exactly the same size as the present lot include one sold at Christie's Hong Kong, 28 October 2002, lot 596, and another formerly in the Lee family collection, sold in the same rooms, 1 December 2009, lot 1833.

This group bears relation to other Imperial Jiajing period carved lacquers and ceramics in the use of auspicious motifs, including the writhing dragon, 'shou' medallion and lingzhi sprigs. 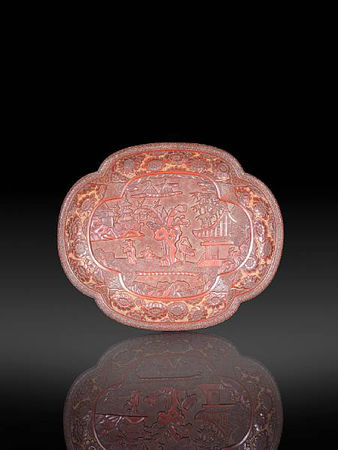 Of quatrefoil form, deeply carved to the interior with a riverscape scene depicting a scholar and his attendant, carrying a qin, crossing a bridge by ornamental rockwork and a crane, with islands and pavilions in the background, all enclosed by a wide border of four shaped cartouches, each enclosing various florets, reserved on a diaper ground, enclosed by a diaper pattern at the rim, the underside carved with meandering tendrils, the base lacquered black, Japanese wood box; 20.5cm (8in) wide (2). Estimate: £30,000 - 50,000, HK$ 370,000 - 610,000, USD 47,000 - 79,000

Lacquer trays of this four-lobed oval form are particularly rare, and bear relation to earlier Yuan and early Ming Dynasty examples. See the same border of eight-pointed rosettes on a Yuan Dynasty foliated oval tray from the Lee Family Collection, sold at Christie's Hong Kong, 1 December 2009, lot 1811 and another, with the base inscribed 'Zhang Cheng zao' and dated to the 14th/early 15th century sold in the same rooms, 30 May 2005, lot 1336. Another six-lobed dish, similarly carved with the same rosettes at the rim, with a foliate border framing a scene of scholars within landscapes, bearing an incised six-character mark, is illustrated in 2000 Years of Chinese Lacquer, Hong Kong, 1993, Catalogue no.41. See also a seven-lobed tray carved to the interior with a scholar playing his qin, and his attendant, bordered with wide prunus band and with a similar diaper pattern to the rim, illustrated by K.Mono, Imported lacquerwork - Chinese, Korean and Ryukyuan (Okinawa). Selections from the Tokugawa Art Museum, Nagoya, 1997, Catalogue no.99.