"Yi Zhou: The Earbridge and The Greatness" @ Contrasts Gallery, Shanghai

"Yi Zhou: The Earbridge and The Greatness" @ Contrasts Gallery, Shanghai The Earbridge and The Greatness, an exhibition of 3-D video animations, ink brush drawings and sculpture by Yi Zhou will be on view at Contrasts Gallery, No 181 Middle Jiangxi Road, G/F, Shanghai November 14 -December 9, 2010.

Yi Zhou, an artist recognized for her large-scale multimedia installations that combine film, digital animation, photography, sculpture, painting, drawing and contemporary music, made the short films The Ear in 2009 and The Greatness, a sequel to The Ear in 2010.

The Ear
Starring Pharrell Williams, the recording artist and producer, this short film was inspired by Nikolai Gogol’s short story The Nose. The film’s first sequence begins with a man cutting vegetables, and ends with his severed ear on the counter. The film shifts to a transcendental journey through a series of complex, computer-generated spaces. This inner world of organic architectures leads to a climax when the Ear is transformed, becoming part of the structure of The Earbridge. Like Gogol’s The Nose, this film has both Freudian implications and suggests the ego detached from its customary status, here achieving a place in an effort larger than itself.

The Ear features music by Ennio Morricone, an Academy Award winning composer. The costumes were designed by Rick Owens and BBC Ice cream. The Greatness
The Greatness is a reinterpretation of Dante’s Divine Comedy. Like The Ear, The Greatness deals with transformation as it explores the boundaries between reality and dreams, imagination and madness, and life and death.

In the video, Yi Zhou experiments with 3-D technology, using innovative camera movements. She reimagines elements from her previous videos, as well adding new ones. The soundtrack, based on the emotional vibrations one experiences during moments of exaltation, fear, mystery and pleasure, is a collaboration between Yi Zhou, Ennio Morricone and MK2. Morricone has employed his "object and subject fusion" technique that layers voices onto existing songs. 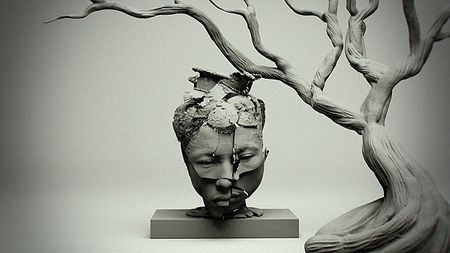 Yi Zhou is a young Chinese artist, whose work is mainly based on films and 3D animation. She was raised in Rome and graduated between London and Paris with a degree in political science and economics, Yi Zhou’s always been proud of her Chinese cultural heritage. Upon completion of her studies, from the age of 22, Yi Zhou has been gaining international recognition for her works. Yi Zhou’s films have been consecutively nominated in competition at Venice Film Festival and Sundance Film Festival. A key part of her work is also based on experimental collaboration with worldwide famous musicians such as the French band "Air", and the Oscar Lifetime Achievement Award winner Ennio Morricone. The latter has just won the Polar Music Prize, which is described as the Nobel Prize of music.

Since its inception in 1992, Contrasts Gallery, based in Shanghai, has showcased leading contemporary Chinese artists, and has brought the work of international artist to China. The gallery’s exhibitions have stressed the rich history of China’s art and artists who have reinvented its legacy in order to express their feelings about change in China today. The gallery has evolved from a philosophy rooted in the tradition of Chinese Literati art, which promotes art for the sake self-cultivation and embraces creativity without hierarchies. Contrast’s exhibition program is designed to create new cultural exchanges between artist from the East and the West, working in divergent traditions and across disciplines. The gallery’s 2010 schedule includes exhibitions by many of today’s most prominent Chinese artists: Shao Fan, Zhang Hao, Wei Ligang, Li Tianbing, Lan Zhenghui and Yi Zhou. www.contrastsgallery.com