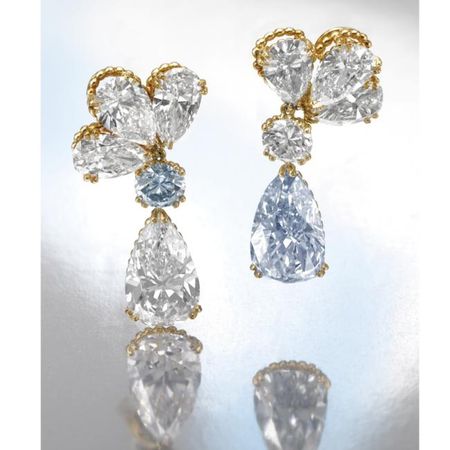 Accompanied by Gübelin report no. 1009259 stating that the sapphire is of Burmese origin, with no indications of heating.

NOTE: Alexandre Reza, the celebrated Paris-based jeweller, was born in Moscow in 1922. During his career, that began after the Second World War and which spans four decades, he assembled one of the largest, most diverse and precious collections of gems in the world.
He travelled widely to select each stone individually, and then transformed them with his vision, and the skill of his virtuoso craftsmen, into miniature works of art that are the exquisite suites of necklaces, bracelets, earrings and rings for which Alexandre Reza is justly renowned. The creative process was unhurried and uncompromising.
He first supplied gems to, and manufactured for some of the greatest jewellers of the 60s and 70s such as Cartier, Chaumet, Gerard, Harry Winston, Van Cleef & Arpels, Bvlgari and Boucheron. He then decided to found his own brand and established his own retail operations 30 years ago on the Place Vendôme in Paris, in Geneva and in the South of France, offering some of the greatest Haute Joaillerie of the day.
The jeweller's art begins with an understanding that jewels are the most personal of decoration and are meant to be worn to reflect and enhance a woman's beauty. Reza was inspired in his designs both by historical jewels of royal provenance that he recreated to appeal to a contemporary audience, as well as by a modern classicism of his own creation. He framed sumptuous colours in three dimensional diamond-set mountings that defy the hardness of metal and are like fabric, soft and supple, nestling on the ear and settling around the neck or wrist in the most flattering way. Movement, lightness, composition and harmony are the key words of his designs.
Each of Alexandre Reza's creations is imbued with his special understanding of and appreciation for both the physical beauty and the metaphysical properties of the precious gems with which it is set. His is a unique interpretation – respectful of the past, celebratory of the present and enduring in the future.