HONG KONG.- Bonhams Hong Kong today (23 November 2010) celebrated its second “Golden Gavel Auction”, when Part II of the world’s finest collection of important Chinese snuff bottles, the Mary and George Bloch Collection, sold 100% and achieved world record prices. Against presale estimates of HK$24,000,000, the sale total was HK$54,832,000 (£4, 437,930) with every one of the 155 rare bottles successfully sold. A good number of the lots sold for twice to four times its estimate.

A new world record for a porcelain snuff bottle was reached when Lot 121 sold for a staggering HK$8,384,000 (£678,815), four times its pre-sale estimate of HK$2,000,000. Commissioned by the Qianlong emperor and enamelled in the palace workshops of the Imperial Palace between 1736 and 1760, this extraordinary snuff bottle, decorated with ‘double-gourds’, symbolic of long life, is identical to another rare example still preserved in the Forbidden City Palace Museum. Famille rose enamels on colourless glaze on porcelain; with a flat lip and slightly concave foot; moulded in the form of a double gourd with two loop handles, the surface with a moulded and painted design of a fruiting, leafy, gourd-vine on a pale orange-beige ground with a dense formalized scrolling floral design in gold; the lip and interior of the neck also gold; the interior covered with colourless glaze; the foot painted in black seal script Qianlong nian zhi ('Made during the Qianlong period')
Imperial kilns, Jingdezhen, 1736–1760
Height: 5.12 cm
Mouth/lip: 0.61/1.08 cm
Stopper: gilt bronze chased with a formalized floral design

Condition: very minor natural pitting of some enamels used as part of the design on the gourds, where the pits have been edged in some places with dabs of red enamel to look like variations in the rind of the fruit; not at all obtrusive, even where not used; otherwise, in extraordinary, kiln condition and apparently barely, if ever, used.

This bottle is moulded in two parts that are joined vertically, the joint visible on the inside but not on the outside. It shares with the Tang Ying bottles the thinness and delicacy of the porcelain body; it has a similar seal mark in black enamel and a very similar tiny floral scroll in gold on a coloured ground. The quality is also exceptional, both in the painting of the design and the firing of the enamels. We are probably safe in assuming that it was made during the earlier part of the reign, perhaps as early as the 1740s. It is not at all out of place among the high-quality wares made under the supervision of Tang Ying, and now that we have proof of high-quality early-Qianlong porcelain snuff-bottle production at Jingdezhen, there is no reason to believe that this was not part of it.

All of the early-Qianlong bottles made at Jingdezhen under the supervision of Tang Ying or benefiting from the high level of artistic and technical quality he brought to the kilns are masterly; this is no exception. Apart from the thinness of the body and the delicate formal balance between the upper and lower bulbs of the form, the composition is extremely well thought out. The painting is exquisite, just as it was on the J & J bottle, where we noted the elegance of the brushwork, particularly in the painting of the leaves with their well-controlled, beautifully modulated black lines on green enamel.

It may be fruitful to link this small series of early-Qianlong masterpieces to a certain order from the emperor in 1758 (twelfth month) for 'nine gourd-shaped snuff bottles' to be made at Jingdezhen based upon one of three samples sent down from the court. The samples in the imperial order are described as yangci ('foreign porcelain'); despite the ambiguity as to the precise meaning of this term in the mid-eighteenth century, it seems likely that the three samples sent down to Jingdezhen were porcelain rather than enamelled metal. From this order, we can therefore posit the existence of two series of such bottles, the later series known to have been limited to nine pieces; if the two series constituted the total production, half a dozen is a plausible number to have survived. Linking the surviving bottles to the 1758 order also explains why the relief gourds appear to be in different positions on some bottles: each series was made with its own mould, resulting in minor changes to the positioning of the relief elements.

The highest price of the sale, and a new world record for a glass snuff bottle was achieved by Lot 152, a 'famille-rose' enamelled gold-ground glass 'lotus' snuff bottle, which sold for HK$9,056,000 (£732,921), almost four times its presale estimate of HK$2,500,000. This exquisite snuff bottle was commissioned by the Qianlong emperor (1736-95), and decorated with lotus flowers against a rich golden ground, and incised on the base with the Imperial mark. 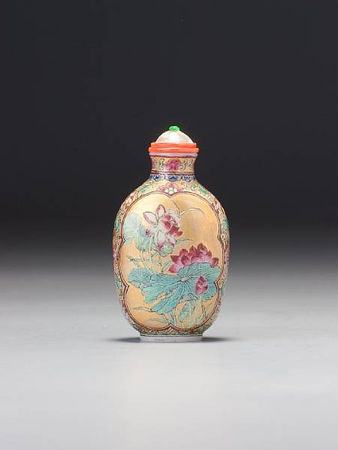 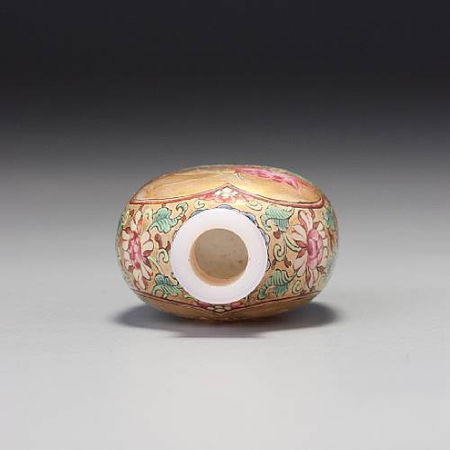 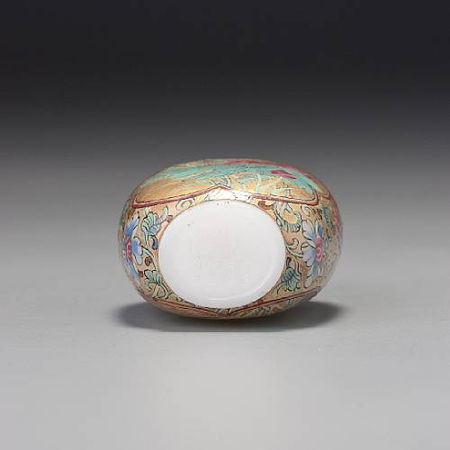 Famille rose enamels on translucent white glass; with a flat lip and recessed slightly convex foot surrounded by a protruding convex footrim; painted on each main side with a foliate panel of lotus and aquatic grass, the panels surrounded by a formalized floral design, the shoulders with a band of formalized lingzhi beneath a neck band of formalized flowers, all on a gold ground; the foot inscribed in engraved seal script Qianlong nian zhi ('Made during the Qianlong period')
Imperial, palace workshops, Beijing, 1736–1765
Height: 5.21 cm
Mouth/lip: 0.80/1.32 cm
Stopper: pearl; jadeite finial; coral collar

Condition: some original pitting to enamels, particularly the ruby red; tiniest of insignificant chips to inner lip (or possibly part of the process of manufacture); very slight wear to the gold enamel, with one tiny flake from the gold enamel beneath the large lotus leaf on the right; otherwise, in kiln condition

Commentary: The painting on the present bottle is not only purely Chinese in conception and style, it is magnificently well painted, with all the subtlety of the finest enamels from the early-Qianlong palace workshops. In an unusual reversal of the usual technical shortcomings on early enamels on glass, the green here has fired exceptionally well, while the ruby-pink, where it is thicker, bubbled in the firing and is pitted where the bubbles burst. The excellent state of the gold ground on so many bottles of this group suggests they have barely been used. Enamelled glass was not distributed with the same largesse as more easily produced wares, so far more remained in the imperial collection until after 1860 and were less exposed to wear.

The stopper for this bottle was made by Moss with a pearl provided by Bloch. Among the many bottles in the National Palace Museum, Taipei, the vast majority have what appears to be an enamelled metal stopper imitating a lapis cabochon with a pearl finial and a gilt metal collar, while others have the standard gilt-bronze stopper for palace enamels, with a formalized floral design.

Bonhams’ Head of Chinese Ceramic and Works of Art in Hong Kong Julian King who prepared the auction, said: “We are delighted that these extraordinary snuff bottles are returning to Beijing, where they were originally commissioned by the Qianlong emperor. The same real-estate tycoon who broke the world record when he paid HK$9,280,000 for a snuff bottle on his first day of collecting them at the Part I of the sale held on 29 May made a triumphant return to Bonhams auctions today.”