The exquisitely carved pendant of rectangular section, intricately carved on both sides, the pictorial side carved through the chocolate-brown layer to the translucent pale ground with a lively scene of two monkeys picking lingzhi, the inscribed side with a ten-character stanza in kaishu script concluding with a two-character seal, both framed under gently incised ruyi-shaped clouds. 4.8cm x 3.8cm. Sold for HK$396,000

The stanza reads: "The lingzhi in the garden is delicate; the cypresses along the paving tile are luxuriant"
.
元圃靈芝秀。仙階柏葉榮。 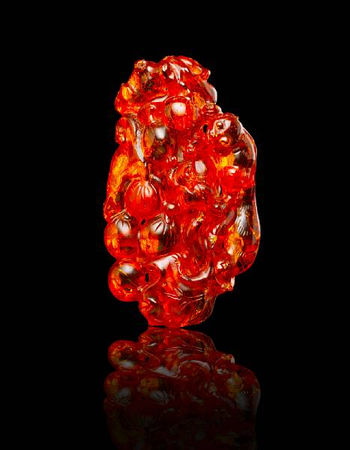 The rich orange-brown material naturalistically carved in the form of a squirrel clambering amidst vines teeming with ripe grapes; 6cm long. Sold for HK$36,000 Finely carved through the chocolate-brown layer to the transulcent pale ground, portraying two monkeys amidst a profusion of luxuriant lingzhi; 5cm long. Sold for HK$24,000 The white and russet stone worked in relief with a leaf on which a squirrel is depicted clambering in pursuit of grapes, the underside with intricate detailing of the leaf's veins; 5.8cm long. Sold for HK$13,200