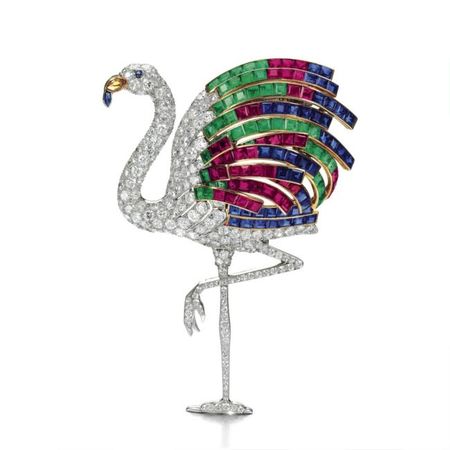 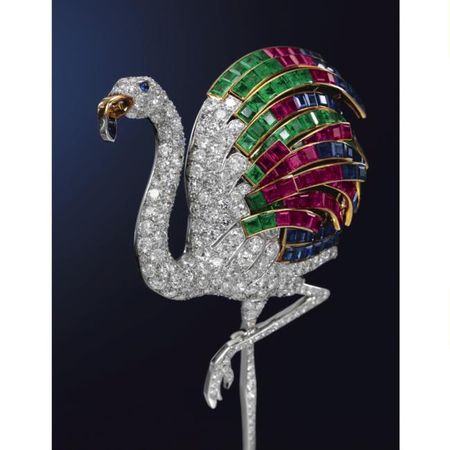 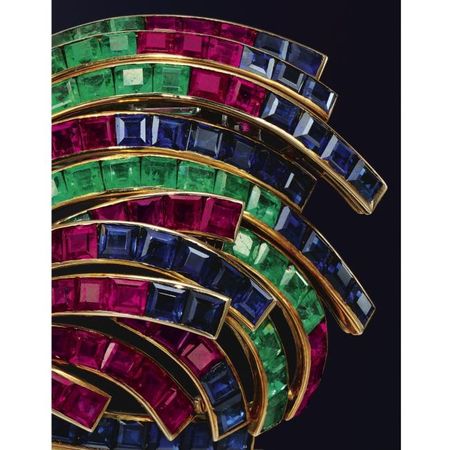 Cf: Suzy Menkes, The Windsor Style, London, 1987, chapter entitled Objects of Desire with details of several items in the jewellery collection of the Duchess of Windsor including the Flamingo.

NOTE: Together with the panther bracelet Jeanne Toussaint was also involved in the creations of this magnificent large flamingo clip, the designer being Peter Lemarchand. The Duchess of Windsor is known to have worn this brooch soon after acquiring it, when she is recorded in a photograph with the Duke wearing it as they arrived at the Ritz Hotel, Madrid, on his forty-sixth birthday on 23rd June 1940. [Michael Bloch, Operation Willi, 2nd p. of photographs after p.82].

From Cartier's archives it is apparent that in order to make this jewel, the Duchess had several of her own pieces unmounted so that the stones could be re-used in this clip; jewels used included a necklace and four bracelets to supply the 42 calibré-cut rubies, the same number of sapphires and emeralds and 102 diamonds that make up this piece.

Peter Lemarchand was a true designer in every sense of the word, taking directly from nature their salient elements, he had a true awareness of natural surroundings and wild animals. He spent much of his time painting in his Montparnasse studio. In 1948 Toussaint paid tribute to him commenting on, "our common love for animals and birds"; the creation of Cartier's 'Great Cats' and amazing jewelled birds came out of this shared vision. Naturalistic jewels became gradually more stylised in the mid 1940's. This flamingo is depicted at rest with one leg up and the feathers created from calibré-cut emeralds, rubies and sapphires are curved and raised, more three-dimensional rather than flat.

"Lemarchand's animal figures have vigour, plasticity and an inimitable sense of movement – thanks it must be said, to the virtuoso technique of the Cartier craftsmen who executed the designs and who could capture the articulate litheness of a great cat or emphasise the tail of a bird of paradise with a flexible platinum setting...." [Hans Nadelhoffer page 233]. He even took inspiration from the Egyptian collections at the Louvre including bronzes of the feline Egyptian goddess Bastet.

Sotheby's. Exceptional Jewels and Precious Objects Formerly in the Collection of The Duchess of Windsor, 30 Nov 10, London www.sothebys.com