the pear-shaped body rising from a short spreading foot to a tall cylindrical neck with broad everted rim, carved around the exterior with a leafy undulating composite floral scroll above a lotus lappet band, the neck with two sets of raised ribs divided by a pair of dragon-head handles suspending large fixed rings, covered overall with a bluish-green glaze thinning to white at the edges and around the carved decoration; 26cm., 10 1/4 in.    Est. 20,000—30,000 GBP. Lot Sold 121,250 GBP 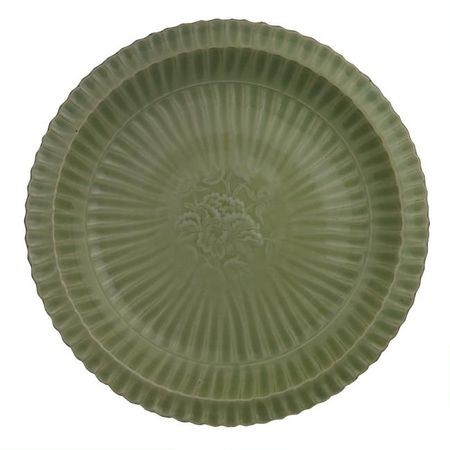 NOTE: Although a number of dishes of this type are known, the present example is unusual for the fluted cavetto extending to the rim which is usually left plain. However, a similar chrysanthemum form 'Longquan' dish of slightly smaller dimension was sold at Christie's Amsterdam, 15th October 1990, lot 105.

For related examples with a plain rim see a dish illustrated in Celadons from Longquan Kilns, Taipei, 1998, pl. 206; another published in Regina Krahl, Chinese Ceramics in the Topkapi Saray Museum, Istanbul, vol. 1, London, 1986, pl. 76, with a peony spray incised in the centre; and a third dish from the H.M. Knight collection sold in these rooms, 11th December 1979, lot 217.