Modelled as five scalloped peaks on a waisted rectangular base, each side painted with sprays of lingzhi fungus surrounding a diamond panel enclosing a square inscribed in Arabic, with a double-line border tracing the edges of the peaks, the shaped platform base with scrolled strapwork linked by ruyi-heads at the corners and at the centre of each side, the flat underside with a transparent glaze bearing the reign mark in underglaze-blue within double-squares, wood stand.

Notes: A small group of these blue and white brushrests in mountain peak form are known in collections. Each of these brushrests are inscribed in cursive Arabic script within a lozenge on each of the facing sides. Each lozenge has been deciphered to contain a single-word in the Persian language with diacritical points and symbols of short vowels: one side reading khamah, meaning 'pen', and the other side, dan, literally meaning 'that which holds anything'. When the two words are read together they form khamadan or 'pen holder'. For a further reading see J. Harrison Hall, Ming Ceramics, The British Museum Press, 2001, p. 192-199; where the British Museum example, which was originally bought in Beijing before its publication by Sir A. W. Franks in 1876, is illustrated, ibid., no. 8:3.

It appears that there are subtle differences in these brushrests in that one group, such as with the current example, is designed with four additional solid dots on the cardinal points of the lozenge surrounding the Arabic text. For two other examples with the additional dots: the first in the Metropolitan Museum of Art, included in the 1949 exhibition, An Exhibition of Blue-Decorated Porcelain of the Ming Dynasty at the Philadelphia Museum of Art, 1986, p. 79, no. 99; and the other from the Frederick M. Meyer Collection, sold at Christie's London, 24 June 1974, lot 102, and sold again at Sotheby's Hong Kong, 23 May 1978, lot 38, and now in the Hong Kong Musuem of Art. Brushrests without the circles within the lozenge include the example in the British Museum mentioned above; in the Percival David Foundation, now at the British Museum, illustrated by R. Scott and R. Kerr, Ceramic Evolution in the Middle Ming Period, 1994, p. 29, no. 47, and in the Museum of Fine Arts, Boston, illustrated, op. cit., 1986, p. 70, no. 98. 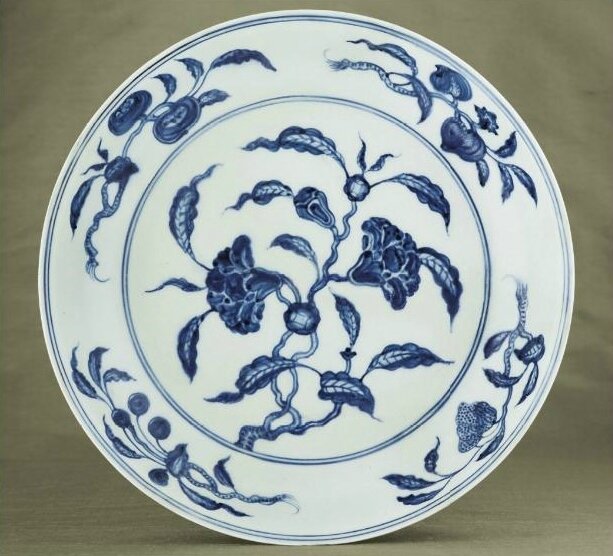 Sturdily potted with shallow sides, the interior centre painted to depict a single branch of flowering pomegranate growing two large blooms in profile, detailed with leaves and buds, the cavetto with four fruiting branches including peach, lychee, persimmon and cherry blossom between double-cirle borders, the exterior with four evenly spaced lotus sprays, the reign mark written in a horizontal line under the everted mouth rim, underside base fired in the biscuit, box.

Notes: Compare with two Chenghua-marked dishes of similar size and designed with this 'pomegranate' pattern: the first in the Shanghai Museum illustrated by Wang Qingzheng, Underglaze Blue & Red, Shanghai Museum, 1987, p. 90, col. pl. 80; and the other in the Matsuoka Museum of Art, illustrated in Selected Masterpieces of Oriental Ceramics, Japan, 1975, no. 58.

Two Chenghua examples both decorated with this exact pattern against a yellow enamel ground are illustrated in Catalogue of the Special Exhibition of Ch'eng-Hua Porcelain Ware, National Palace Museum, 2003, p. 104-105, nos. 86-87. See also a Chenghua-marked yellow-ground dish painted with flowering gardenia in underglaze-blue, ibid., p. 106, no. 88. These floral spray patterns were first pioneered during the Xuande period. Compare earlier examples included in the exhibition, Xuande Imperial Porcelain Excavated at Jingdezhen, Chang Foundation, Taipei, 1998, p. 85, no. 84 (pomegranate spray); and p. 86-87, nos. 85-1-3 (three dishes, each with a flowering peony spray). This style was popularly revived in the Chenghua, Hongzhi, Zhengde and Jiajing reigns. A similar Zhengde-marked dish of this flowering pomegranate pattern from the same collection is offered in the current sale, lot 2805. Of unusually small size, the dish is finely painted to the centre with a bouquet comprising lotus flowers, seed pods and leaves, and other aquatic plants tied together with a fluttering ribbon, encircled by three concentric rings and a composite floral scroll around the cavetto below a wave band, the exterior with a further floral scroll between classic scrolls at the rim and a key-fret band above the foot, the cobalt with extensive 'heaping and piling', the base unglazed, box.

Notes: The design on this dish is typically described as 'lotus bouquet' as the majority of the flowers, pods and leaves belong to the auspicious lotus plant. However, the bouquet also includes additional auspicious plants, such as the arrow-shaped sagittaria sagittifolia, a symbol both of generosity and of food in a time of shortage, and a stalk of millet, symbolising an abundance of grain.

Lotus bouquet dishes of this small size are relatively rare. J. A. Pope records two examples in Chinese Porcelains from the Ardebil Shrine, Washington, 1956, pl. 30, nos. 29.16-17, and another dish of this size is illustrated by R. Krahl in Chinese Ceramics from the Meiyintang Collection, vol. II, London, 1994, pl. 665. A number of dishes of this size have also been sold at auction, including one from the collection of His Excellency Henri Beduwe, Belgian Ambassador to the Lebanon, sold at Sotheby's London, 15 April 1980, lot 235; and another sold at Christie's Hong Kong, 29 September 1992, lot 470. Painted with cranes in flight amidst scattered flowering branches, ruyi-heads and flowers growing from rocks amongst breaking waves, the shoulders of each bulb with calligraphy written within evenly spaced roundels, supported on clouds, the base and waist with peach and peony branch meanders, the tapering neck with crisp overlapping plantain, wood stand. The rounded sides of the bowl rising to a slightly everted mouth rim, well painted on the interior and exterior with two vigorous dragons striding amidst scrolling lotus tendrils, those on the interior surrounding a central dragon medallion, the whole raised on a slightly flared columnar support decroated with a continuous band of lotus scroll, all within double-line borders, the reign mark evenly spaced on the interior of the stem foot, wood stand.

Notes: Although this pattern is known on Zhengde-marked dishes and zhadou, it is rare to find it on a stembowl. The only other example of this exact same pattern and size is the stembowl in the National Palace Museum, illustrated in Blue-and-White Ware of the Ming Dynasty, Book IV, CAFA, Hong Kong, 1963, p. 55, pl. 6 (see fig. 1).

Vessels of this type decorated with striding dragons on the exterior first appeared in the Yuan period. During the early Ming period, the style was first revived in the Xuande period. For a prototype from which the present example was inspired, see Ciqi Shangde Longwen, Catalogue of a Special Exhibition of Dragon-motif Porcelain in the National Palace Museum, Taipei, 1983, col. pl. 18. The National Palace Museum stembowl bears a reign mark of four characters as with the present vessel. The Zhengde example follows very closely to its Xuande predecessor on the exterior but the interior of the former is densely decorated with further striding dragons whilst the latter has Sanskrit design.