Photography from the New China @ the J. Paul Getty Museum, at the Getty Center

Photography from the New China @ the J. Paul Getty Museum, at the Getty Center LOS ANGELEs, CA.- On view at the J. Paul Getty Museum, at the Getty Center, December 7, 2010 —April 24, 2011, Photography from the New China displays a selection of Chinese photographs produced since the 1990s, when People's Republic leader Deng Xiaoping introduced the current period of Opening and Reform. Photography from the New China is shown concurrently with Felice Beato: A Photographer on the Eastern Road, an exhibition featuring nineteenth-century views of China and other parts of East Asia, creating a powerful contrast with the contemporary works.

“This exhibition highlights the Getty Museum’s recently acquired photographs by some of the young artists emerging from the reinvented society that is present-day China,” says Judith Keller, senior curator of photographs and curator of the exhibition. “The photographs on display provide a contemporary view of Chinese art and culture.”

This exhibition looks closely at recent acquisitions of photographs by Hai Bo, Liu Zheng, Song Yongping, Rong Rong, and Wang Qingsong, which feature dominant styles in recent Chinese photography, including performance for the camera, the incorporation of family photographs, and an emphasis on the body. Supplemented by private collection loans of work by Huang Yan, Qiu Zhijie, and Zhang Huan, the exhibition also explores such themes as pre-revolutionary Chinese literati art, vestiges of the Cultural Revolution, and the newly rampant consumerism.

In the past 20 years, China's economy has made huge strides. The rapid transition, an amazingly compressed transformation in the lives of millions, has meant great progress in the way art is taught, made, and talked about in China's flourishing urban centers. This exhibition presents the work of eight Chinese artists using photography to respond to their changing world.* Wang Qingsong creates large-scale photographs that explore the rapid changes occurring in China, inspired by material grounded in classical Chinese art as well as in Western art history. His photographs comment on such topics as rampant consumerism, migration, globalization, and the influence of the West on Chinese culture. Capturing the contradictions of contemporary Chinese life, Wang Qingsong's staged compositions offer a critical consideration of the gulf between the traditional and the modern in China. About his photographs, he writes: "I wanted to create scenes in which old hopes are replaced with contemporary desires for money and power. To compare the past and present, I have reimagined old and new masterpieces in ways that reflect current social realities." His perspective reveals the paradoxes and confusions generated by what he ironically calls a "glorious life which is sweeter than honey."

Born in Heilongjiang Province in 1966, Wang Qingsong initially studied painting at the Sichuan Academy of Fine Arts. Influenced by traditional scroll painting, as well as documentary and staged photography, he began making photographs in 1996. Internationally recognized for his mural-size pictures, Wang Qingsong has exhibited extensively. He lives and works in Beijing. 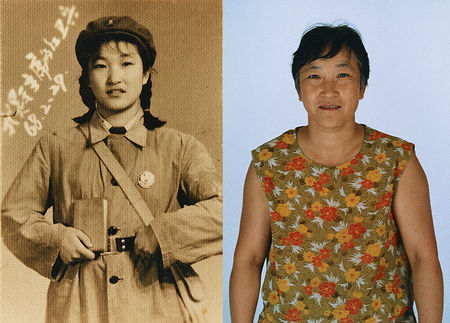 For the series They, Hai Bo creates diptychs dealing with the passage of time. Devoted to the reconstruction of the past, the artist makes photographs that are dominated by the themes of memory and change. Finding a photograph with the inscription "For the Future 1973.5.20" was the catalyst for this series, with the artist searching out each subject included in the photograph to restage the original. The diptychs juxtapose the past with the present, allowing the viewer to consider how the transformations that have occurred in China over the past decades have affected those who lived through them. Differences are captured in the pairings; youth is replaced by age, some of the sitters are absent, having died, and details such as clothing and hairstyles have shifted. Time does not stand still, as the single image might lead one to believe, and life outside the frame continues.

Born in 1962 in Jilin Province in northeastern China, Hai Bo initially studied printmaking, graduating in 1984 from the Fine Art Institute of Jilin. In the early 1990s he began exploring the artistic possibilities of photography. Hai Bo lives and works in Beijing. Rong Rong first documented the artists and the experimental performances they created while living in a neighborhood of Beijing known as the Beijing East Village. He later developed his own performances for the camera, producing a three-part body of work called Wedding Gown. Photographed in an abandoned village 40 miles from Beijing, the series uses the wedding dress as a metaphor for innocence and femininity. The hand-colored photographs evoke nostalgia for the past, while the figures enact a dreamlike narrative of death, cleansing, and potential rebirth. Rong Rong, the lone nude figure, moves through the site as if searching for something that cannot be found. 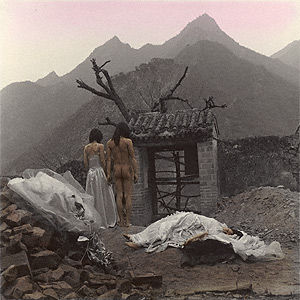 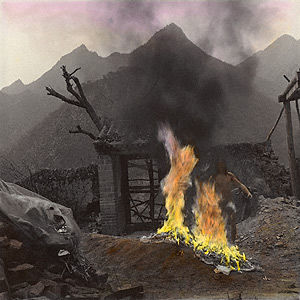 Rong Rong was born in 1968 in Zhangzhou, in Fujian Province. He studied painting at the Fujian Industrial Art Institute in 1986 and worked in a studio taking passport photos and wedding pictures. In 1993, he moved to the Beijing East Village. In 2007 Rong Rong and his Japanese wife and fellow artist, Inri, opened Three Shadows Photography Art Centre, a Beijing complex with exhibition space, a workshop with darkrooms, and an educational center with a library. Employing nudity in his photographs, Liu Zheng opposes the Chinese state's repressive sexual mores. Historically, the nude is not depicted in Chinese art to the extent that it is in Western art, and during the Cultural Revolution it was forbidden. Contemporary artists and others have defied this taboo by including nudity in their practices to challenge authority and what is deemed acceptable. Liu Zheng's photographs reference turn-of-the-last-century late 19th-century prints through their sepia toning and scratches to the negative around the edge of the image. By overturning imagery from earlier stage and film productions, he creates an alternative way of looking at the past.

As a child Liu Zheng (born 1969) would copy the work of China's old master painters; however, after high school, at his parents' urging, he enrolled in the Beijing Institute of Technology. He learned to make photographs while a student in the Engineering and Optics Department and began his career as a photojournalist working for the Beijing newspaper Workers' Daily. With Rong Rong (also in this exhibition), he started a private journal titled New Photography, exploring contemporary photographic issues. Liu Zheng lives and works in Beijing. Song Yongping, a first-born son, sought to balance his artistic career with care of his invalid mother and father as part of his expected duty. In 1998 he began photographing them in a series called My Parents. Using a confrontational approach to portraiture, these images combine performance with elements of everyday familial life. Karen Smith, a writer and art critic based in Beijing, described the photographs as "...a testimony to family bonds, and a sad glimpse into the lives of the masses caught up in the tidal wave of change in China today." The strength of this work is in its collaborative nature. Song Yongping, while tending to his parents' needs, was given the opportunity to honor them by sharing his art making with them. In recording the eventual loss of his parents in 2001, he created a lasting testament to their lives. 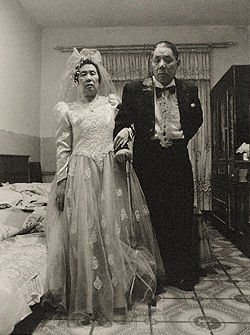 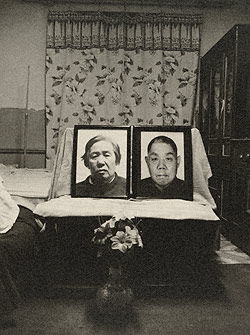 Song Yongping was born in 1961 in Taiyuan, in Shanxi Province. Trained as a painter at the Tianjin Academy of Fine Arts, he graduated in 1983. In the 1990s he emerged as an avant-garde painter and was a member of a group creating New Pictures of the Floating World—images critical of China's newly materialistic urban culture. Song Yongping now devotes himself to his art making and teaching in Beijing. One of Zhang Huan's most powerful works, Family Tree was created two years after he left China to live and work abroad, leaving behind potential persecution as well as family and friends. Dealing with issues of cultural identity, familial relationships, and self-expression, this installation creates a moving image of the isolation felt with the loss of one's past. The artist had three Chinese calligraphers cover his face with poems, tales, and family names from his homeland, animating the traditionally silent portrait through language and performance.

As the series progresses, the calligraphy saturates his face; the linguistic mask takes on a suffocating presence. Staged solely for the camera, the event was documented over the course of a day, the passage of time captured with the increasing layers of ink and the changing light. 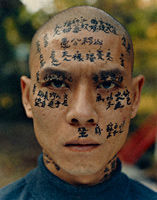 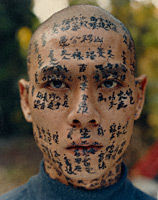 Born in 1965, Zhang Huan studied painting as a graduate student at Beijing's Central Fine Arts Academy. After graduation in 1993, he helped found the artist's enclave Beijing East Village. Zhang Huan subsequently became one of the most recognized Chinese artists engaged in a variety of media: performance, photography, sculpture, painting, and stage production. In 1998 Zhang Huan moved to the United States. His international reputation established, he returned to China in 2006 and opened Zhang Huan Studio in Shanghai. He now divides his time between New York and Shanghai. In the series Standard Pose, Qiu Zhijie explores the historical significance of the posturing found in the poster art and operas of the Cultural Revolution era, which helped maintain Communist Party control over the Chinese population. Using such slogans as "Learn from the workers" or "Long live the dictatorship of the proletariat," the posters celebrated Communist ideology through liangxiangliangxiang (operatic-style frozen poses) and props such as flags, Mao Zedong's Little Red Book, guns, hammers, and lanterns. Jiang Qing, Mao's wife, promoted the program of revolutionary operas that set patriotic plays to music. The figures in Qui Zhijie's photographs dress in contemporary Western clothing, and reenact these poses. The narrative is vague, yet it directly references the idea of the Cultural Revolution. Without the party attributes and rhetoric, the heroic poses represent the unfulfilled promises of the past. Commentaires sur Photography from the New China @ the J. Paul Getty Museum, at the Getty Center