"Gustave Moreau and the Eternal Feminine" @ the National Gallery of Victoria

"Gustave Moreau and the Eternal Feminine" @ the National Gallery of Victoria MELBOURNE.- Be seduced by femmes fatales, goddesses and temptresses of history and legend at the NGV this summer in Gustave Moreau and the Eternal Feminine, the first significant exhibition of Gustave Moreau (1826–1898) to be seen in Australia.

From 10 December, the superb craftsmanship of Gustave Moreau will be celebrated with over 100 paintings, watercolours and drawings from the unique and acclaimed Musée Gustave Moreau in Paris. 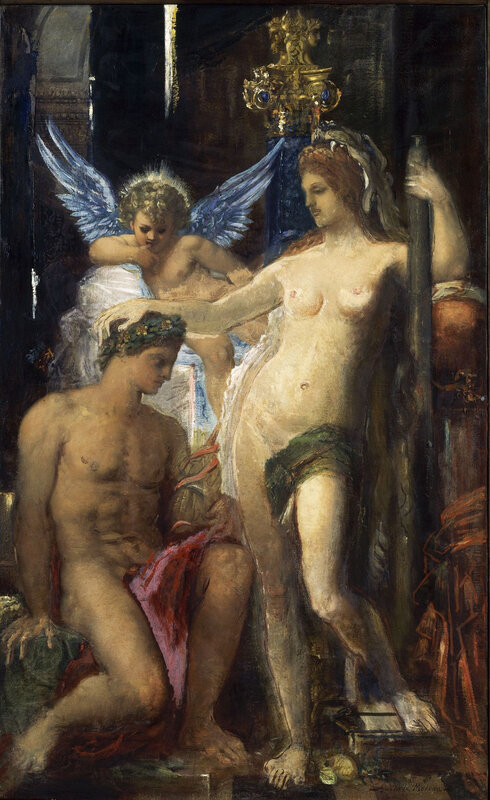 Gerard Vaughan, Director, NGV said this is a once-in-a-lifetime opportunity for Australians to see these captivating works by Moreau.

“Visitors will embrace Moreau’s portrayals of familiar historical and mythical characters. From famed femmes fatales including Salomé, Helen of Troy and Lady Macbeth to the rugged depictions of Hercules and Cyclops, this spectacular exhibition will reveal the many faces of Gustave Moreau.

“Moreau’s pictures are amongst the most haunting and mysterious of the entire 19th century, and ironically are incredibly modern. This is a must see exhibition!” said Dr Vaughan. Gustave Moreau and the Eternal Feminine will explore the artist’s obsession with the female form, taking visitors on a voyage from classical antiquity and the ancient Far East, to Christianity’s more lurid escapades and epic narratives of the Middle Ages.

Ted Gott, Senior Curator, International Art, NGV said: “Throughout his life Moreau was both entranced by female beauty and captivated by the allure of powerful, even dangerous women from the pages of history and legend, making him a cult figure for today’s younger generation who are spellbound by gothic tales and imagery.
“Moreau’s fascination with heroines and queens, goddesses and temptresses were screens through which he could filter his explorations of the key themes of the Eternal Feminine: obsession, dream, luxury, magic, the femme fatale, exoticism and the ideal,” said Dr Gott. A highlight of the exhibition will be a section devoted to Moreau’s most celebrated and intriguing obsession – the story of Salomé and the beheading of John the Baptist. Salomé is often depicted as an icon of dangerous female seductiveness and in this famous tale, her stepfather Herod requests Salomé to dance for him on his birthday in exchange for anything she desires. Salomé dances and then orders the beheading of John the Baptist who was in prison at the time for criticising the marriage of her mother, Herodias and stepfather Herod.

During his youth, Moreau was obsessed with Italian art of the fourteenth and fifteenth centuries, and with narratives drawn from the classical past. This exhibition will feature the tales and tribulations of well known characters of history – both real and mythological – including Helen of Troy, Cleopatra, Messalina, Lady Macbeth, Samson and Delilah, Galatea, Sappho and Salomé. Whilst many of Moreau’s works are filled with mythical female characters, in life he was surrounded by two key female figures: his mother and his girlfriend, Alexandrine Dureux. Moreau lived with his mother until her passing in 1884, while Dureux lived nearby.

After Dureux’s death in 1890, Moreau transformed his family home into a museum, creating massive ateliers for the display of more than 5,000 of his own works of art, as well as dedicating rooms to his father, his mother and Alexandrine Dureux. Left to the French nation in Moreau’s will in 1898 and officially opened to the public in 1903, the Musée Gustave Moreau remains one of the world’s most unique and extraordinary single-artist museums.