Each of similar configuration with a gold filigree body, bright green jadeite forming the head, wings and tail accents, the small feather cloisons inlaid with iridescent kingfisher feathers, most with a single pearl at the base of the tail, and two suspending strands of seed pearls from the head; Average 1 3/4in (4.5cm) long. Sold for $5,490 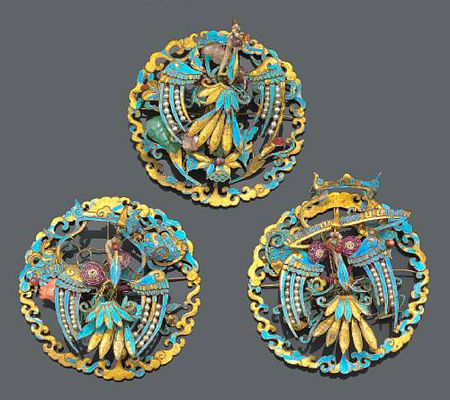 The first a set of three phoenix roundels, each with seed pearl accents to the head and wings, further inlay of coral, rock quartz or jadeite on the auspicious symbols scattered within the foliate-edged medallion; the next a large multi-prong phoenix hairpin with colored glass and pearl blossoms; the fifth an elaborate multi-section phoenix hairpin with extensive feather inlay and displaying purple pom-poms; the last of a phoenix formed by seed pearls, coral beads and hardstones applied to a wrapped wire armature; 3in (7.5cm) diameter of first. Sold for $4,636