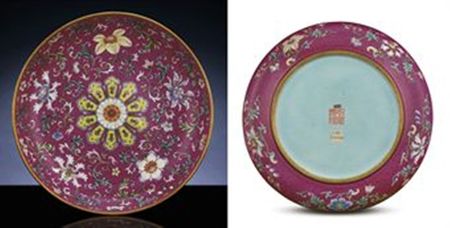 The dish with shallow rounded sides, superbly enamelled on the interior centre with a stylised floral bloom encircled by ten radiating ruyi-head petals, surrounded by five different types of floral sprays growing smaller flowers and leaves to the sides, all against a graviata ruby-red enamel ground, the reverse side smiliarly decorated with five floral sprays, the underside base enamelled turquoise reserving the reign mark in iron-red, the mouth rim and foot rim gilt-decorated; 1 3/8 in. (29 cm.) diam. Estimate HK$1,500,000 - HK$2,000,000 Price Realized HK$10,180,000($1,316,277)

Notes: Dishes with this type of enamelling and decoration on both sides are extremely rare. The application of the graviata technique which involved the incising of the feathery scrolls in the ruby-red enamel, would have been particularly time-consuming. It also required a consumately skilled craftsman to execute the design to a high standard as exemplified by the present dish. Compare the stylised flower sprays with those on bottle vases, all made in the 8th year of the Qianlong reign, included in the exhibition, Stunning Decorative Porcelains from the Ch'ien-lung Reign, National Palace Museum, Taipei, 2008, and included in the Catalogue, no. 29, nos. 41-43. The closest to the present dish is the ruby-red vase, illustrated ibid., no. 42.

Compare the same fine technique on a pink-ground 'butterfly' vase from the Fonthill Heirlooms and the Ping Y. Foundation, sold at Christie's Hong Kong, 3 December 2008, lot 2388.