The seated lions modeled with open jaws, revealing their fangs and red tongues, their bodies richly decorated with molded manes and breasts and legs, while their heads are applied with colorful curly hair and eyebrows and their ears are veined as leaves while their spines are decorated with yellow spotted bamboo above a notch to hold a removable tail, gilt shou medallions between their bulging eyes, fitted wood stands; 12½ in. (31.7 cm.) high, the porcelain (2) - Estimate $25,000 - $40,000

Notes: These exceptionally well-modeled beasts were made separately from whatever base they originally sat on, and without the pups or brocade ball that, perhaps later in the period, became conventional for the type 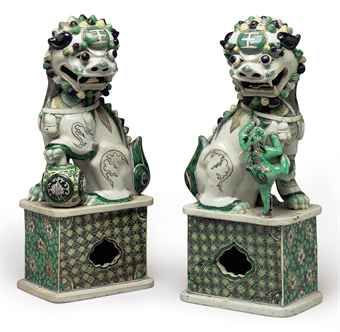 After the Kangxi model, with cream-glazed bodies and green, yellow and black fur details, their foreheads centered with a shou medallion and their jaws open revealing teeth and tongue, the male with brocade ball and the female with green pup; 14½ in. (36.8 cm.) high (2) - Estimate $10,000 - $15,000

The laughing older brother wearing brown jacket and standing on a splash-glazed base, his younger brother holding a sprig of sacred fungus, his trousers cut to reveal his bottom, the well-modeled heads clear-glazed; 9 in. (22.8 cm.) high - Estimate $8,000 - $12,000 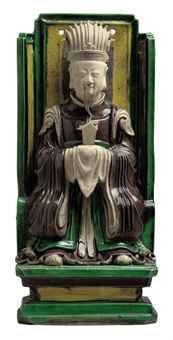 The ruyi-head shaped top decorated with flowering plants on a cream-colored ground and raised on tripod legs patterned in aubergine and black, 8¼ in. (20.9 cm.) wide -Estimate $1,500 - $2,500