Lucas Cranach the Elder (Kronach 1472-1553 Weimar) and Studio, The Infant Christ and Saint John the Baptist

Lucas Cranach the Elder (Kronach 1472-1553 Weimar) and Studio, The Infant Christ and Saint John the Baptist 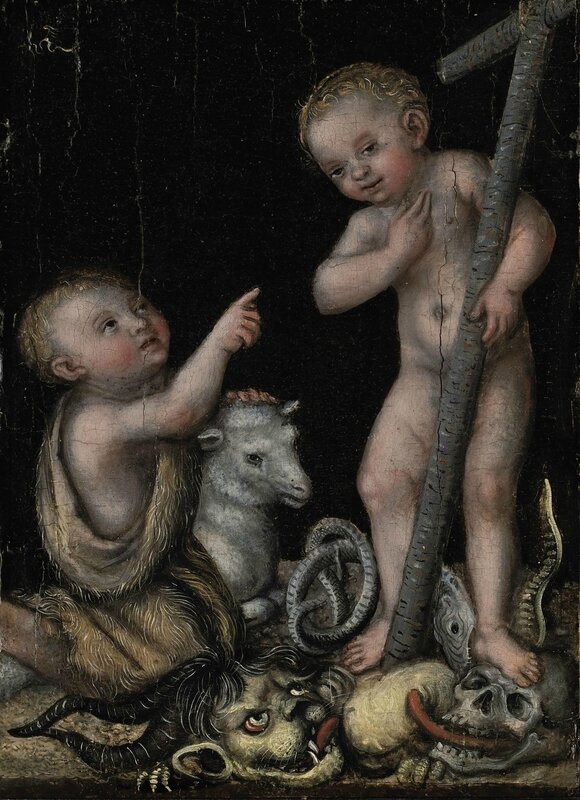 Notes: The composition relates to a small number of works by Cranach depicting the Infant Saint John the Baptist in veneration of the Infant Christ, a theme which ultimately has its sources in Italian depictions of the Holy Family, popularized during the High Renaissance by artists such as Leonardo da Vinci Fra Bartolommeo and Raphael. In Cranach's treatment, the Infants are usually shown in a landscape setting, the Christ Child holding a sapling cross - in allusion both to His infancy and to His sacrifice - while Saint John is shown in the animal-skin cloak of his ascetical retreat into the desert (the 'voice crying in the wilderness', Isaiah 40: 1-3), and the lamb that alludes to his prophetic description of Christ as the Lamb of God ('Ecce Agnus Dei', John 1:29).

Friedlder and Rosenberg held the prime version of this landscape type to be that dated 1534 in the Albert Keller collection, New York (34.5 x 23.5 cm.), while also citing an autograph version in Hannover, Niederschsische Landesgalerie (see The Paintings of Lucas Cranach, London, 1978, no. 222, p. 114). The present picture is more closely related, however, to a work in the Wallraf-Richartz Museum, Cologne (inv. no. 391), dated 1534. Like the present picture, but unlike any other known treatment of the subject in Cranach's oeuvre, the Cologne Christ and Saint John is set against the nondescript black background familiar from many of Cranach's elegant standing nudes, his Venuses and Lucretias, together with the pebbly, arid earthen floor of those pictures, which here replaces the grassy lawn of the landscape type exemplified by the Keller picture.

The Cologne picture is the only other example of Cranach's treatment of this subject with the inclusion of the allegorical attributes in the bottom register, whose symbolism relates to Christian mysticism and which belongs to a very early iconographic tradition, illustrating Cranach's knowledge of and interest in these fields and medieval German art. The figure of the Christ Child alludes to the iconography of 'Christ treading on beasts', in which the resurrected Christ is shown standing on lions, serpents and other beasts, symbolizing his triumph over death, vice and the world - this tradition is rooted in a verse of Psalm 91, 'Thou shalt tread upon the lion and adder: the young lion and the dragon shalt thou trample under feet', and would be illustrated in art from the Late Antique period on. In the Late Carolingian art of France and Germany, the iconography is developed to show Christ stabbing or crushing the beasts with the end of the cross he holds. The snake biting Christ's heel is also occasionally present in Carolingian prototypes, and refers to God's curse on the serpent that tempted Adam and Eve to taste the fruit of the Tree of Knowledge: 'Because thou hast done this, thou art cursed above all cattle, and above every beast of the field; upon thy belly shalt thou go, and dust shalt thou eat all the days of thy life And I will put enmity between thee and the woman, and between thy seed and her seed; it shall bruise thy head, and thou shalt strike his heel' (Genesis, 3:15). The placement of the head of the snake near the end of the cross and the skull adds a further allusion to the Tree of Life; The Golden Legend relates that the wood of the True Cross came from trees grown from the 'tree that Adam ate of', and moreover that three seeds of the Tree of Life had been planted in the mouth of Adam's corpse.

Finally, one additional allusion in this complex allegory is the lionlike creature licking its lips as it eyes the Christ Child, which seems to have reptilian claws and creeping tentacles; this may chimera may refer to the Beast of Revelation, 'like unto a leopard, and his feet were as the feet of a bear, and his mouth as the mouth of a lion: and the dragon gave him his power, and his seat, and great authority' (Revelation, 13:2), which had been engraved with similarly canine features by Dürer in 1498.

The 'Christ treading on beasts' type was often interpreted as symbolising the triumph of the true Church over heresies, and this political subtext may also have appealed to Cranach, the friend of Martin Luther who had such an extraordinary vantage point of the Reformation and the ensuing conflicts. The present picture, smaller than the Cologne composition, may have been painted as a personal rumination on these themes, which are typical of the humanist intellectualism which imbue so many of Cranach's other works. Cranach's sojourn in Augsburg, during which he is thought to have painted the present picture, was made to join his protector the Protestant Elector John Frederick the Magnanimous, recently defeated by the Catholic Holy Roman Emperor Charles V, and made captive in that city. The loose handling of some of the peripheral passages is characteristic of some of his late works, but is also suited to the intimate scale of the work, while the fine, delicate delineation of the hair and faces of the two Infants, and especially the naturalistic modelling of that of Christ, echoes that of Cranach's greatest works.

We are grateful to Dr. Werner Schade for confirming an attribution to Lucas Cranach the Elder on the basis of first-hand inspection, and for suggesting that the picture can be dated to the end of Cranach's career, when the artist was in Augsburg in the years 1550-1551.