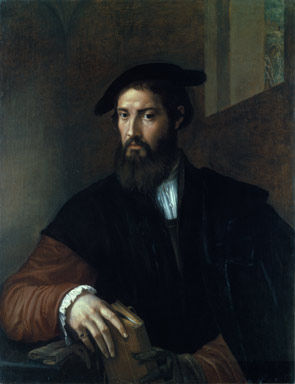 Portrait of a Man, c. 1530, by Parmigianino. Oil on canvas. Private collection.

WILLIAMSTOWN, MA.- A special exhibition of European portrait painting, featuring works by master artists from the late fifteenth century through the early nineteenth century, is on view at the Sterling and Francine Clark Art Institute from January 23 through March 27, 2011, in the exhibition Eye to Eye: European Portraits 1450–1850. Representing the range of styles and themes in Old Master portraiture as practiced in the Netherlands, Germany, Italy, Spain, England, and France, the twenty-nine paintings and one sculpture in the exhibition include remarkable works by Memling, Cranach, Parmigianino, Ribera, Rubens, Van Dyck, Greuze, and David, as well as other extraordinary works by lesser-known painters. This exhibition is the first opportunity for the public to see many of these works, which have been lent exclusively to the Clark from a private collection.

The exhibition brings to light a number of rarely known paintings, including Portrait of a Man by the brilliant Mannerist artist Parmigianino, painted around 1530 in Bologna. The glamorous and arresting Portrait of a Young Woman by Giovanni Battista Moroni—a sixteenth-century portrait specialist famous for his penetrating depictions, and widely considered one of the most talented portrait painters of all time—will be shown publicly for the first time. Among the early nineteenth-century works are a pair of portraits of a husband and wife painted by Jacques-Louis David while in exile in Brussels, and a portrayal of a dashing young cavalry officer in Napoleon’s army by David’s great follower Baron Antoine-Jean Gros.

The fully illustrated catalogue will include many works published for the first time outside auction and gallery catalogues. These works include Portrait of a Young Man, a remarkably fresh portrait painted by the Flemish master Peter Paul Rubens around 1610–15, and two canvases by the great Spanish painter Jusepe de Ribera. The paintings in the exhibition are complemented by an extraordinary sculptural relief portrait attributed to Baccio Bandinelli, a sixteenth-century Italian artist deeply influenced by Michelangelo.

“The Clark was founded by a great private art collector,” stated Michael Conforti, director of the Clark, “and we continue to value the insights and discernments represented by a passionate collector’s discriminating eye. Each work on view is exceptional in itself, and together the collection constitutes a brief but rich survey of Old Master portraiture.”

In his catalogue essay, David Ekserdjian, head of the Department of History of Art and Film at the University of Leicester and a Trustee of the National Gallery, London, points out that the tradition of portraiture was dormant in Europe for approximately 1,000 years after the end of the Roman era. During that millennium, he writes, “Only scattered and occasional attempts were made to represent the features of notable individuals realistically, most successfully in sculpture. In consequence, and perhaps rather unexpectedly, we have a perfectly clear sense of what King Jayavarman VII, who ruled Cambodia from 1181 to around 1215, looked like, but are infinitely less certain about the appearance of his European contemporaries.” European portraiture came into its own, he notes, only in the fifteenth century—which is where Eye to Eye begins.

Eye to Eye is organized by Richard Rand, senior curator and curator of paintings and sculpture, and Kathleen Morris, director of exhibitions and collections and curator of decorative arts, both at the Clark. “For centuries, portraiture has captured the imagination of artists and viewers, not to say the sitters themselves,” Rand states. “But what makes a portrait successful? Is it an accurate likeness? An indication of the sitter’s character or social status? A fabulous mastery of the formal possibilities of art-making? Eye to Eye explores these questions through close examination of a fascinating group of masterworks, assembled before the public for the first time.” 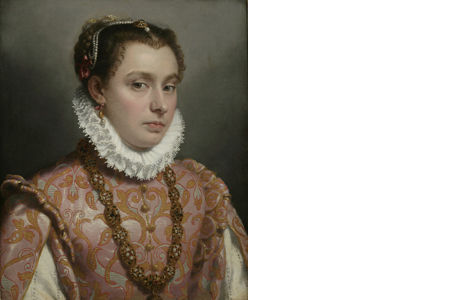 Portrait of a Man at a Window, c. 1530, by Ambrosius Benson. Oil on panel. Private collection. Photo by Glenn Castellano Portrait of a Young Woman Holding Grapes and Apples by Lucas Cranach the Elder. Oil on panel transferred to canvas. Private collection