"Ivory. Baroque Splendor at the Court of Vienna" @ Liebieghaus Skulpturensammlung

"Ivory. Baroque Splendor at the Court of Vienna" @ Liebieghaus Skulpturensammlung

FRANKFURT AM MAIN.- Ivory has been one of the most popular materials since ancient times. Its origins in unknown faraway lands and its rarity account for its costliness. It was particularly the Baroque era that had an extraordinarily high demand for ivory. In the seventeenth century, ivory work reached its culmination in Vienna in the days of Prince Karl Eusebius of Liechtenstein and Emperor Leopold I. The shimmering appearance of the polished material served princely-imperial claims to prestige, as its possession testified to its owners’ power and wealth. The exhibition "Ivory. Baroque Splendor at the Court of Vienna”, presented in the Liebieghaus Skulpturensammlung from February 3 to June 26, 2011, will focus on this heyday of ivory art.

It will feature thirty-six splendid, virtuoso carvings impressively documenting the artisans’ great skill, among them masterly executed statuettes, pitchers, goblets, tankards, and bowls of ivory, objects created for display in so-called cabinets of curiosities and not intended for any practical use. The show comprises works by the most famous ivory artists of the Baroque period, such as Adam Lenckhardt, Johann Caspar Schenck, and Matthias Steinl. It was prepared together with the Kunsthistorisches Museum in Vienna, whose world-renowned Cabinet of Wonders is closed for the time being because of comprehensive restoration measures. This presented the Liebieghaus with the unique opportunity to show a high-caliber selection of masterpieces from the Kunstkammer of the Kunsthistorisches Museum in Frankfurt before the items will be on display again on a permanent basis in Vienna after the Cabinet’s reopening in late 2012. Eight additional high-carat loans come from the Reiner Winkler Collection. In Ancient Greece, Phidias already created large statues of gods whose skin was executed in ivory, and the Bible describes Solomon’s throne as made up of ivory parts. It was above all in the Middle Ages and in the Baroque era that ivory was held in high esteem as a material. The great demand finally resulted in the emergence of new ports of entry in the seventeenth century; both the East India Company and the West India Company furthered the transport of African ivory in particular. The concentration on necessarily small-format ivory works fit in well with the fact that there were hardly any or no commissions at all conferred for large-size church or palace interiors during the Thirty Years’ War and the plague epidemics. Sculptors and their clients increasingly or entirely dedicated themselves to small mobile sculptures. 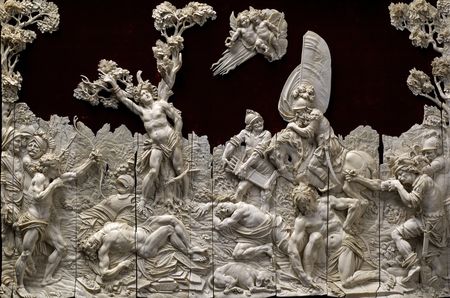 In the Renaissance and Mannerist periods, bronze was preferred for small sculptures. Yet, ivory outstripped the material in the course of the seventeenth century. People appreciated its combination of elasticity and hardness, as well as its gleaming transparency and delicate veining resembling the tone of flesh. The heyday of the production of ivory works in the seventeenth century was based on sixteenthcentury ivory turnery, on such early examples as those by the Master of the Furies. Besides the major bourgeois towns, the secular and ecclesiastical capitals became centers of ivory production from about 1650 on – a development that did not come to an end before the early eighteenth century. Ivory carvers were to be found mainly in Munich and Augsburg, but also in Schwäbisch Hall, Ulm, Mechlin, Amsterdam, Dresden, and Düsseldorf. 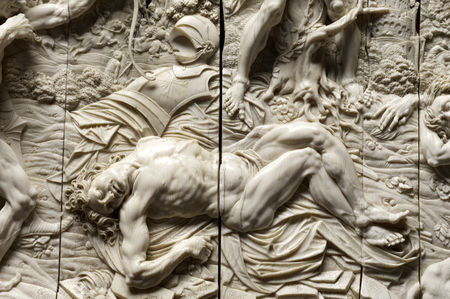 It was in Vienna in the days of Prince Karl Eusebius of Liechtenstein (reigned 1627–1684) and thanks to the promotion by Emperor Leopold I (reigned 1658–1705) shortly after that ivory art flourished as it did nowhere else. Both worked the lathe (the exhibition includes a lidded tankard made by Emperor Leopold I), owned several lathes themselves, and employed ivory turners at their courts. Their anything but ordinary fascination with the material is also evidenced by their successful endeavors to establish close bonds with the ivory carvers Adam Lenckhardt (1610–1661), Johann Caspar Schenck (ca. 1620–1674), and Matthias Steinl (1643/1644–1727). The great importance attached to ivory attracted other artists and prompted them to move to Vienna. Numerous ivory carvers took up residence in the city or lived there for several months or years. The imperial capital became the leading center of Baroque ivory art. An extraordinarily fruitful atmosphere of mutual influences and forms of collaboration evolved. In retrospect, this flowering of ivory art may seem surprising when considering that the country was again and again struck by wars and plague epidemics. Yet, neither the prince nor the emperor considered earnestly curbing their households despite empty treasuries: the possession of exceptionally valuable ivory works was definitely an essential element of princely representation, emphasized one’s claim to power, and demonstrated one’s creditworthiness. Adam Lenckhardt was the artist who rung in the brilliant beginnings of ivory art’s days of glory in Vienna; all his works known to us are ivory pieces. He was the first ivory carver to be appointed court sculptor (Kammerbildhauer) by Prince Karl Eusebius of Liechtenstein in 1642. The so-called Master of the Martyrdom of Saint Sebastian was also working in Vienna in those days. His reliefs, especially his masterpiece showing the saint’s ordeal to which the artist owes his name, confront us with realistic figures revealing robust, stocky proportions. He created prototypes that exercised a decisive influence on his followers. Johann Caspar Schenck, who was to be appointed the emperor’s first court ivory engraver (Kammerbeinstecher), followed in his footsteps 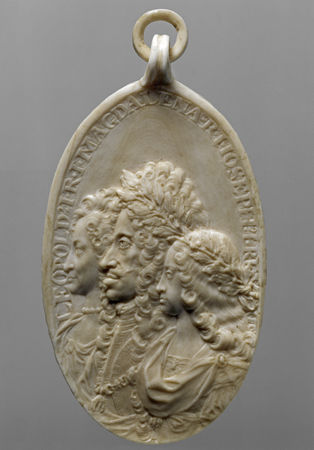 It was on the emperor’s instructions that he created the famous lidded tankard rendering the encounter between Dionysus, the god of wine, and King Pentheus: while sexual drives and nudity prevail in the god’s entourage, elegant bodies are to be found on the king’s side; the style of the carver, who came from Constance, was characterized by a linear sharpness of forms and overlapping elements. Balthasar Grießmann (ca. 1620–1706) had already arrived in Vienna before Schenck: he was renowned for his vessels and bowls and developed an outstanding mastery and wealth of ideas. In 1688, two years after the death of Matthias Rauchmiller (1645–1686), one of the most versatile and highly esteemed artists at the Court of Vienna, Matthias Steinl arrived in the imperial capital. 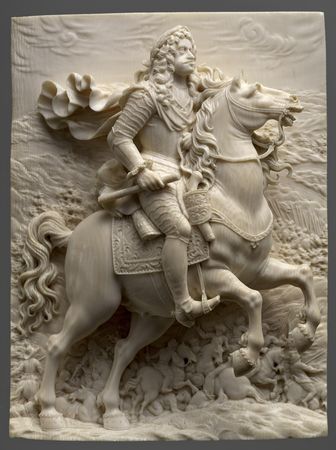 A native of Salzburg, he had worked in Silesia, a region to which Rauchmiller had also entertained close contacts. Steinl was employed as the emperor’s court ivory engraver around 1688. We know only of nine ivory statuettes made by the master, which are to be regarded as highlights of Baroque art. These comprise the small figure of "Chronus on the Globe,” the "Allegory of the Elements Water and Air,” as well as the famous equestrian statues of Leopold I, Joseph I, and Charles VI (which are not loanable, though). Especially Rauchmiller and Steinl had a significant impact on such important artists as Ignaz Bendl (ca. 1650 – ca. 1730), Ignaz Elhafen (1658–1715), and Jacob Auer (1645–1706), key works by all of whom will be presented in the exhibition. The exhibition centers on the question why it was ivory of all materials which was preferred for small sculptures in the Baroque era, particularly in Vienna. It also offers visitors the unique opportunity to directly compare works which have never been on display together and to pursue crucial lines of development within ivory art. The Liebieghaus has already shown several exhibitions dedicated to ivory art: in 2001 it presented "Ivory. Insights into the Reiner Winkler Collection” and in 2006 "The Master of the Furies.” 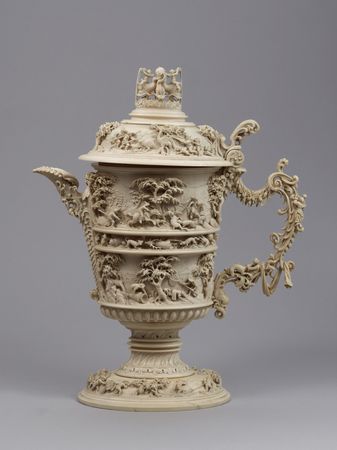 Today, the trade in ivory is largely forbidden. The dramatic decline in elephant populations goes back to the twentieth century; before, these populations were not endangered through hunting. It was only the increasing demand for ivory in conjunction with the use of modern weapons in the past century that pushed entire species to the brink of extinction. The hunt for ivory reached its peak between 1970 and 1989. Thanks to the Washington Endangered Species Act passed in 1973, elephant populations in some African countries have recovered. Particularly the populations in southern and eastern Africa have stabilized and are even increasing by four percent a year today 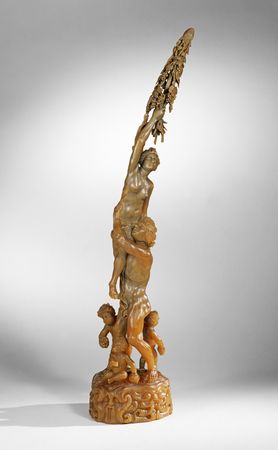