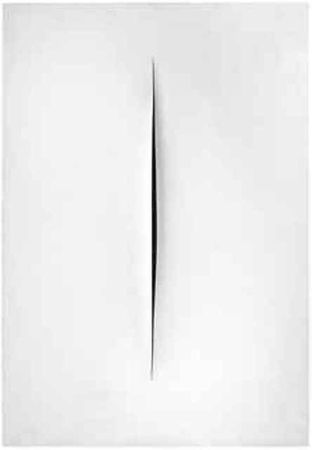 Notes: On to a pristine large white canvas, Fontana's only intervention is a perfect vertical linear cut that penetrates the serene perfection of the canvas. Of unusually beautiful proportions for this series, the cut sits perfectly within the central vertical axis to create a sublime poetry of form. The white painted surface and central incision of Concetto spaziale, Attesa instil this work with a sense of pristine order. The absence of colour appears as a kind of zero point or lacuna, a blank slate on which to launch a new beginning. It also serves to reduce the physical presence of the rectangular plane so the surgically precise slit emerges with greater dramatic force. Light, a kind of moving energy, is not only able to bounce off the reflective surface but also, in theory, to pass through it into the shadowy abyss behind (in theory only, as to heighten the effect and to lend the cut a sense of the void, it is in fact backed with black tape).

Spare, elegant and immediate, Lucio Fontana's Concetto spaziale, Attesa of 1964 is a striking example of his ambition to immortalise a fleeting moment for eternity. The large white canvas has been cut apart by the long downward stroke of Fontana's razor-sharp blade, a spontaneous action that almost always came in an unexpected instant after days or weeks of pondering a painted surface. The emphatic simplicity of this single clean-cut slash belies the artist's profound consideration of abstract concepts surrounding nature, matter and existence. The Concetto spaziale, Attese (Spatial Concept: Expectations) series were so-named because Fontana felt they were the inception of a new kind of creative expression and a type of art form that was yet to arrive.

His work was deeply inspired by the fantasy of space travel, which was fast becoming a reality for the world's major powers. Fontana proposed that the advent of man's ability to escape the stratosphere would have major consequences for the traditional notion of the art object and the conventional, humanist model of the self. In practical terms, his radical solution to the problems demanded by this new age were the hole and the cut (the buchi and the tagli) - two dynamic gestural and penetrative acts made on the canvas that infused its flat two-dimensional faade with real space.

Cutting through the canvas membrane completely transforms painting's physical and symbolic form. Fontana's contemporary critics frequently interpreted this process as a violent and destructive act, or as a gibe at the gesturalism of post-painterly abstraction, but the Argentine-Italian artist defended his work as a creative exploration of intangible phenomena. His holes and slashes were not an attack on art, but were instead the opening of a door into new realms of artistic discovery. In 1954 Fontana argued that, 'Sculpture and painting are both things of the past... We need a new form. Art that's movement. Art within space' (Fontana, quoted in A. White, 'Lucio Fontana: Between Utopia and Kitsch', Grey Room, no. 5, Autumn, 2001, p. 56).

Fontana's desire to invade space with dynamic movement recalls Italian pre-war attempts to depict movement through painting. His radical cutting gesture may be seen as a radical progression upon one of the first Futurist manifesto's proud declarations: 'The gesture which we would reproduce on canvas shall no longer be a fixed moment in universal dynamism. It will be dynamic sensation itself' (U. Boccioni et al., 'Futurist Painting: Technical Manifesto', 1910 reproduced in C. Harrison and P. Wood (ed.), Art in Theory 1900-1990, Cambridge, 1993,p. 150). But instead of creating a representation of dynamic movement through time and space, Fontana enacted it, leaving the slash mark and the hole as its trace. In that simple action, he opened up the redundant surface of the canvas to a realm of new possibilities. Even though the fabric stands as the material evidence of the opening up of space, it is almost incidental, and is arguably secondary to the space itself. The definition of Concetto spaziale, Attesa therefore lies outside the painting's appearance - it is the physical gesture of cutting that is the 'spatial concept', not the cut itself. In this way, Fontana disregarded conventional production techniques to establish a radically new visual language that introduced the concept of immateriality in art. Explaining his ambition to go beyond the apparent certainty of tangible substances, the artist stated: 'As a painter, while working on one of my perforated canvases, I do not want to make a painting: I want to open up space, create a new dimension for art, tie in with the cosmos as it endlessly expands beyond the confining plane of the picture' (Fontana, quoted in J. van der Marck and E. Crispolti, La Connaissance, Brussels 1974, p. 7).

The sharp, vertical incision to Concetto spaziale, Attesa shouts from the canvas like an exclamation mark as a definitive and iconographic image of Fontana's Spatialist theories. The importance of the gesture lies in its expression of the enveloping abyss and its ability to lend form to the invisible. The cut, as a testimony to Fontana's physical action, is likewise an assertion of his active place in the world, however insignificant it might seem in the vastness of the universe. With a single knife strike, he has explored the conundrum that to represent 'Nothing', we must either imagine it or conceive it, therefore bringing about an awareness of being. Just as Fontana has converted a seemingly destructive act into one of creation, so too has he proved that contemplation of nothingness can provide a great wellspring of artistic inspiration.